Xander Chokes Kristen and Steals the Nicole Mask From Her

Tuesday July 16, 2019: On Days of our Lives today, Eli and Lani question "Nicole," Kate and Ted get on the same page with their story, and Xander makes bail. 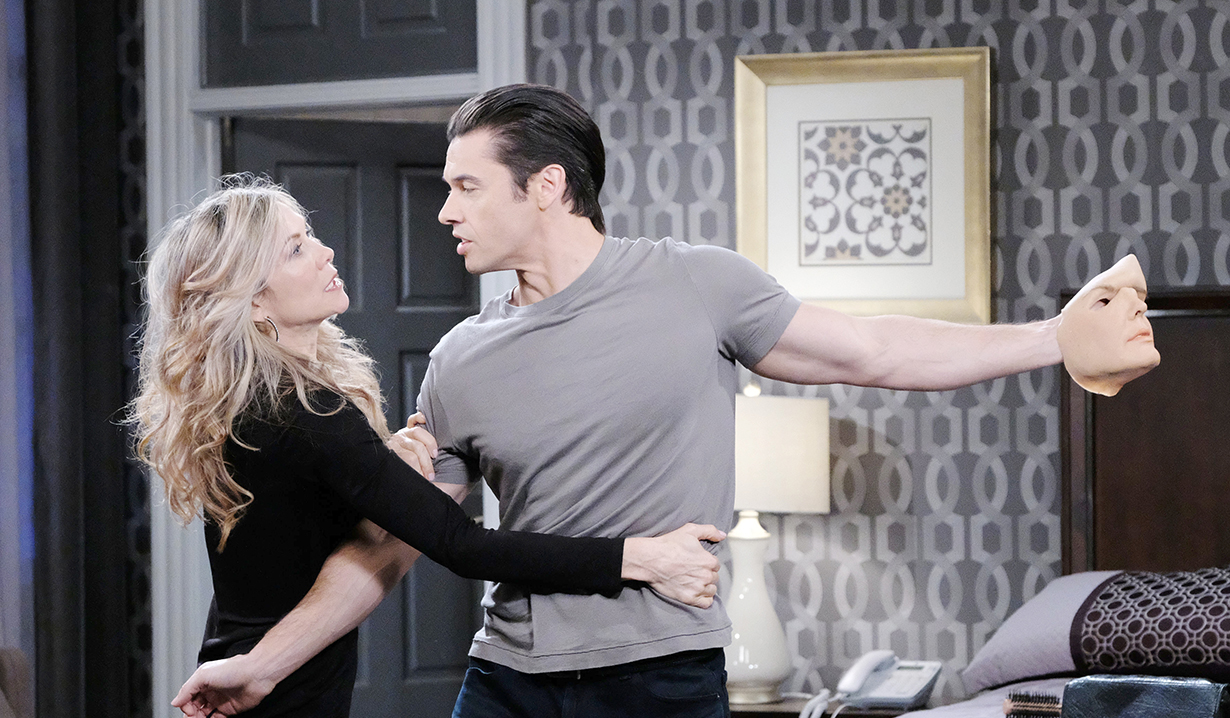 At SPD, Eve demands to interrogate Xander in her office – alone. She takes him away and Lani and Eli find that suspicious. Eli gets an idea and the cops head out together. Meanwhile, in the interrogation room, Gabi thinks Nicole is behind Stefan’s set up. It doesn’t make sense to Stefan but Gabs points out that Nicole’s been lashing out at everyone but him. Gabi announces that she’ll get to the bottom of this and get him released. They kiss. In Eve’s office, Xander blackmails Eve to keep quiet or risk losing her job. Eve snipes that she can’t spin this.

In the hospital, Hope asks Ted what the good news was about Nicole he called her about. Ted lies that Xander told him Holly was alive in order to lure him to the docks where he captured him. They talk about getting together. Hope finds it hard because of Rafe though he’s moved on. Maybe it’s time she did too. She leans in for a kiss. In Kate’s room, Kate bitches about Brady hiring Xander. Rex says Brady should get credit for her being saved. He goes to check her labs and she flashes to Kristen forcing her and Ted to lie.

In Faux Nicole’s room at Salem Inn, Kristin, in the Nicole 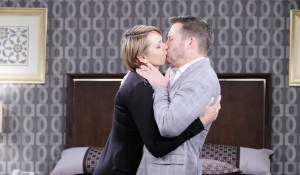 mask, tells Brady that Eric means nothing to her anymore so why can’t they be together. Brady says they can work together and that’s all. “Nicole” kisses him and eventually he stops. He’s sorry but that’s a mistake. He goes and Kristen has a fit about Eric getting in her way.

Brady turns up at the hospital. He wants details about how Xander kidnapped her so he can fire him. Kate says they should eradicate Stefan DiMera while they’re at it since he was behind it. Brady’s glad that at least Kristen’s dead. Rex reappears. He needs to get home to his bride. Later, Kate visits Ted and interrupts their kiss. She thanks Hope for rescuing them and Hope leaves them to talk. Kate doesn’t know what he sees in Hope. Ted rolls his eyes. Kate says they’ve got to keep their stories straight.

At Eric’s apartment, Eric paces and moans about Nicole. 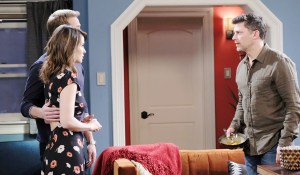 He knows he has to move on. Sarah’s sorry. They eat spaghetti as Eric considers getting a fresh start outside of Salem. Sarah blurts, “No, you can’t go!” He’s her best friend. Eric says it’s for the best. They move in and almost kiss when Rex walks in. They pull apart and tell him about the run-in with Nicole and Rex tells them they found Kate and Ted. He relays the story.

Eli and Lani arrive at Salem Inn to ask “Nicole” about her relationship with Xander and that conversation that Kate overheard outside her room. “Nicole” thinks quickly. She says that she didn’t think Xander was serious. She claims they argued over their divorce and he threatened to kill her the way he killed Ted Laurent. That must be what Kate heard. Eli asks why she didn’t come to them. 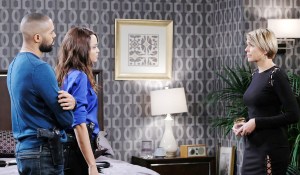 Nicole lies that she was afraid. They let her know that Stefan was working with Xander and they’ve both been arrested. Eli reveals that Xander plans on getting immunity once he reveals all. “Nicole” thanks the cops and sees them out. Kristen learns Xander’s out on bail just as he comes to her door. He summarizes what happened at SPD and protests that she left him to fend for himself. “I’m not your monkey anymore.” He wraps his hands around her neck and pushes her up against the wall, and tells her it’s time to say goodbye. He lets go and takes her mask off, and they fight over it.

More: Days of our Lives’ theme of the week – threats

Brady arrives at SPD and demands answers from Eve as to why Xander’s out on bail. Eve says he’s trying to make a deal to testify about Stefan or whoever he’s working with. They discuss Nicole and Eve asks if he’s open to pursuing a relationship with her. In the interrogation room, Stefan thanks Gabi for believing him. This feels as if they’ve already taken their relationship to the next level. Gabi laughs uneasily and goes.

Eli and Lani arrive at the hospital. They run into Hope before going to talk to Ted and Kate, who are in the other room scheming.

Brady tries to kick Xander out of Titan. 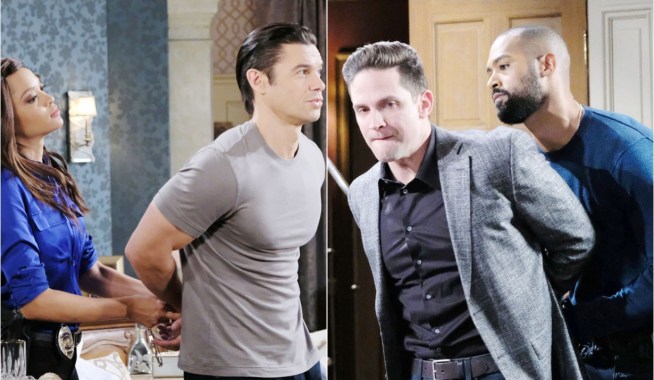 Jack Decides to Take Rolf’s Serum After Clashing With Jennifer 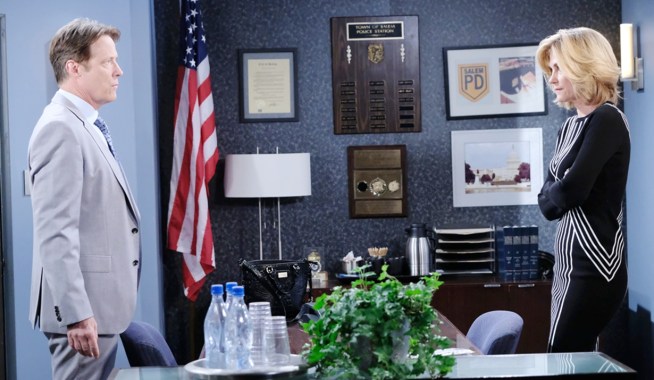