Monday July 15, 2019: On Days of our Lives today, Kristen lets Xander know who is taking the fall for the kidnappings, Eli tells Abe about his engagement to Lani, and Gabi isn't happy that Brady sold her out to Chloe. 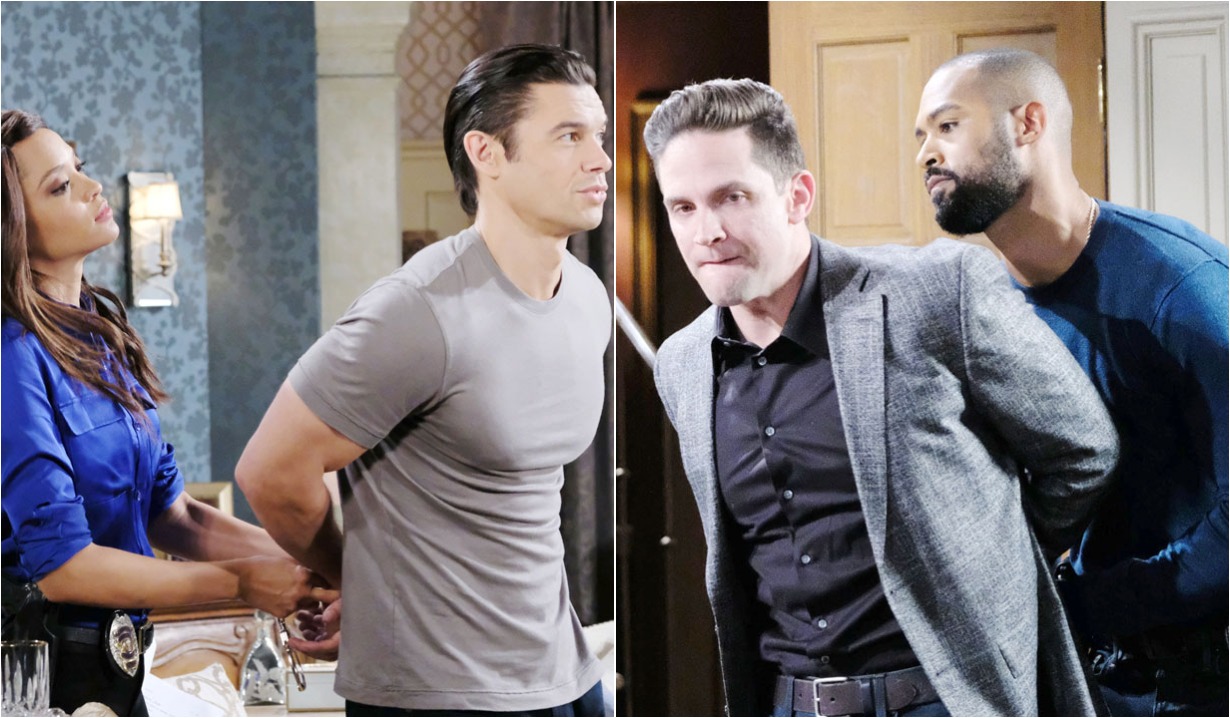 From SPD, Eli disconnects the call from Julie and tells Abe that he and Lani are engaged. Abe gives Eli his blessing. The men embrace and Lani turns up to hug her father. He goes and Eli gives Lani a huge square-cut diamond ring. They profess their love. Rex interrupts to report Kate as a missing person. Eli tells him about Kate’s anonymous tip to the police. Rex is distraught to learn that Xander said Kate was away on business and Eve dropped the case.

At Salem Inn, Kristen chews on an apple and tells Xander he’s always 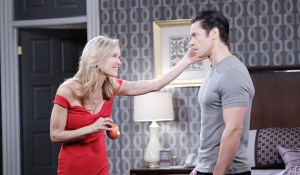 three moves behind her. She wants to take her rightful place at the head of the DiMera family. Stefan is going down with help from Kate and Ted.

At the DiMera mansion, Stefan’s surprised to see Hope, Ted and Kate in his living room. Hope recounts that Ted and Kate have accused him of holding them hostage. They flashback to Kristen forcing them at gunpoint to lie that Stefan held them captive. If they double-cross her, Kristen would kill one of Kate’s kids and Hope. Stefan denies holding them captive. He kicks them all out and goes to the wine cellar where the two were kept to look around. He heads back upstairs for a drink. Soon, Abe appears. Stefan asks him to ensure Nicole’s out of his company. Eli waltzes in and when he arrests Stefan, Stefan orders Abe to keep it quiet. 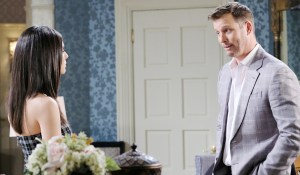 about the plan to destroy Stefan. Brady explains the reason behind telling the truth. He says not to worry. Chloe can’t stand the guy. She’ll keep mum. He also asks Gabi to be careful not to fall in love with Stefan the way he did when he was stringing Eve along. Gabi flashes to kissing Stefan but insists she’s in control. Brady’s shocked to hear Stefan fired Nicole. He’s further disturbed by Gabi’s story of how Nicole went crazy and attacked Stefan.

Outside at the pub, Abe opens up to Eric about Nicole’s issues at work which ended in her being fired. Eric’s upset. Abe reveals that when he went to her room to talk to her, he saw that it was trashed. He thinks she’s suffering from a mental breakdown and asks if Eric can talk Marlena into speaking with her.

More: Promo of Jack making an admission to Jenn

Hope brings Kate and Ted to the hospital and calls Eli with an update. 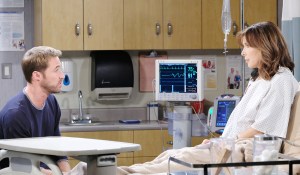 Eli relays to Rex that Kate’s at the hospital and he dashes over. Kate retells the lie that this was Stefan DiMera’s fault. Rex doesn’t think it makes sense. If Stefan wanted revenge for Kate killing Vivian, why did he keep her alive? Kate has no answers. In Ted’s room, Hope sits with Ted and summarizes everything that happened since he’s been away, including seeing the diamond necklace meant for her on Sarah’s neck. Ted says he’d never give up on her. She’s what kept him going in that cell. He wants to be with her. Hope says there’s plenty of time for them to figure out what they want. They hold hands.

Back at Salem Inn, Kristen hears the news that Stefan was blamed for the kidnappings. Xander’s glad Ted’s taking the fall but when Kristen tells him he’s taking the fall along with him, Xander vows to take her down with him. He takes off and she shouts after that 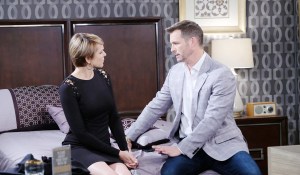 she wasn’t finished explaining the plan to him. Eric and Brady wind up outside. Eric has no luck talking to her so Brady tries. “Nicole” dons the mask and wig and opens the door. The trio discusses her losing her job and she begins to whine and blame Eric for killing her kid. She lets Brady in and slams the door in Eric’s face. Brady’s worried about her. He tells her to give up on DiMera and work for him. “Nicole” says it’d be too painful knowing that he doesn’t want her. She moves in for a kiss and he can’t resist her.

More: Clare’s goodbye played out like an afterschool special

As Gabi’s taunting Xander for being stupid at the Kiriakis mansion, Lani interrupts to arrest him.

Eli shoves Stefan into the interrogation room at SPD. 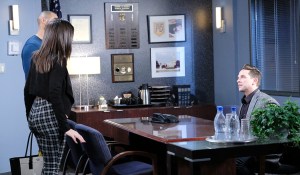 Stefan calls Ted and Kate liars. Gabi rushes in and Eli gives them space. Stefan tells her he’s been framed. They put pieces together and wonder if Nicole is behind this since she wouldn’t allow them into the cellar. Xander arrives with Lani. He wants immunity, claiming he’s a pawn.

Eric returns to Abe at the pub, unhappy that Nicole wouldn’t let him help her.

Xander Chokes Kristen and Steals the...