Kristen Assaults Stefan and Decides to Reveal Herself and Kill Everyone

Thursday July 11, 2019: On Days of our Lives today, "Nicole" is livid when Stefan fires her, Hope stalls Eve so that Eli can question Xander, and Maggie almost takes a drink. 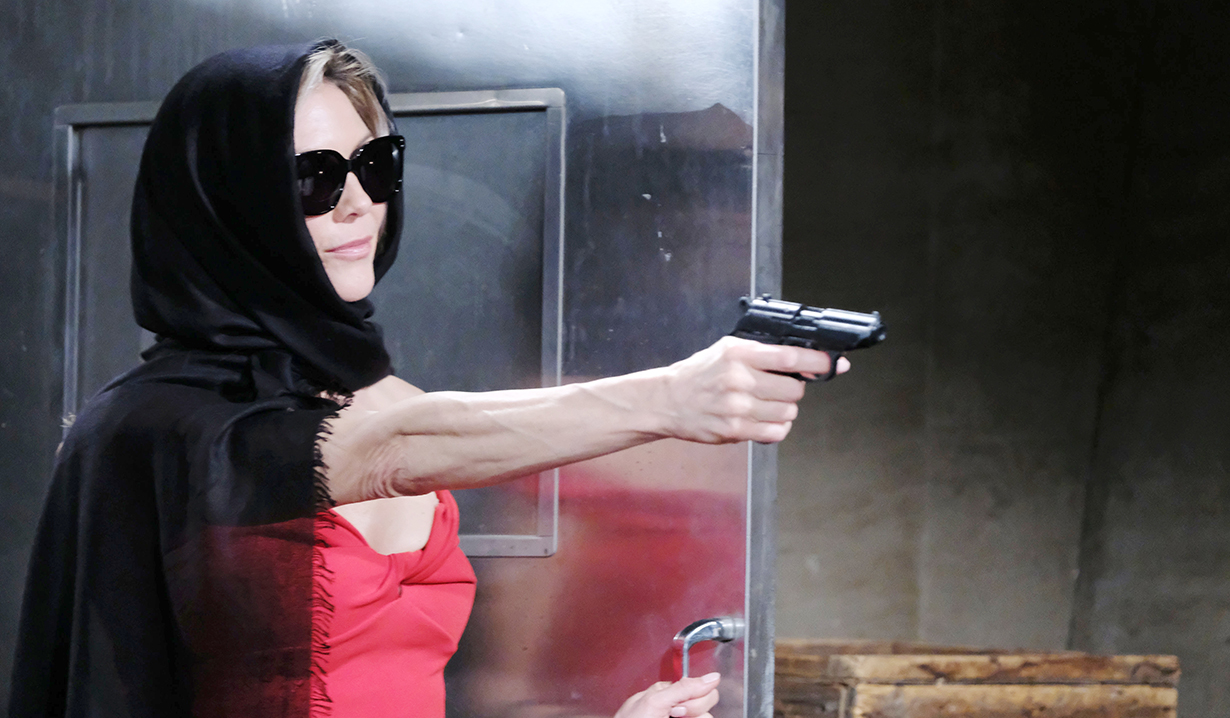 Eli texts Hope as she’s at the square that he’s bringing Xander in for questioning so Hope replies that she’ll stall Eve. She overhears Eve threatening Ben and blathers about her being responsible for Claire. Eve lies that she didn’t know Claire set the fires and Hope knows different. She hopes that Jack is filing for divorce. Eve makes threats to charge Hope if she starts anything.

At SPD, Eli accuses Xander of murdering Ted Laurent. Xander retorts that it’s absurd so Eli lets him hear Kate’s anonymous tip. Xander maintains that they can’t trust what Kate says. She hates him. Xander lies that he sent Kate to Kuala Lumpur on a business trip. Once he proves it, he assumes Eli will have no reason to keep him. Eli’s annoyed that Kate can’t be reached but he has probable cause to detain Xander. Xander demands to speak with Eve. Eve suddenly appears and kicks Eli out. Xander explains what went down and she refuses to help. He’s on his own. Xander warns he’ll talk to Jack so Eve lets him go. Eli calls Hope with an update and Eve overhears and threatens his job. 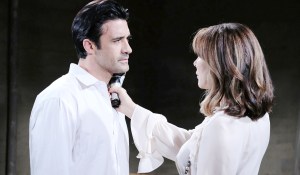 In the secret room, Kate holds the broken champagne bottle to Ted’s neck but he doesn’t think she’ll off him. She needs him to survive once Xander returns. She agrees and he asks her to tell Hope he was innocent in all this if he doesn’t make it.

At Doug’s Place, when “Nicole” is fired by Stefan, she reacts by snorting that he can’t. This is her company. Stefan laughs and FauxNicole backpedals. She signed a contract. She threatens to spill his affair with an ex-con because if she goes down, she’ll take DiMera with her. 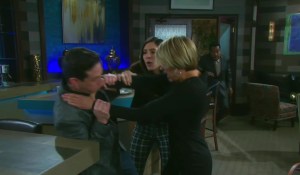 Gabi calls “Nicole” a whore and she calls Gabi a golddigger. Stefan snaps that Nic hasn’t been at work since he hired her. She thinks he’s lacking compassion but Stefan doesn’t think she’s ready for this much responsibility. He asks her to go so she threatens to sue for wrongful dismissal. Stefan asserts his position and “Nicole” attacks him. Abe rushes in and helps Gabi pull Nicole off Stefan. Nicole threatens Stefan better watch his back so Stefan wants to call the cops. “Nicole” agrees. Stefan explains what just happened and Abe agrees – maybe Nicole isn’t ready to work. Enraged, “Nicole” takes off. Abe will try to put a positive spin on this but he’s not optimistic so Stefan says to lie that she resigned. Later, Abe is gone and Gabi and Stefan head into Julie and Chloe’s office where Stefan writes a few letters about Nicole’s dismissal. He’ll decide which to use depending on her. Gabi wants to run Basic Black.

Stefan’s not sure, then asks if Nicole was right – has she been using him? Gabs denies it. His power draws her in. They kiss passionately.

Maggie picks up after Victor’s mess at the mansion and finds his stash of bourbon. She opens the bottle and takes a sniff, then looks around. “Don’t. Just don’t, Maggie. Call Brady,” she tells herself while pouring some in a glass. Sarah catches her. Maggie explains she found a bottle under the sofa. Victor hid it. She cries that she didn’t drink it. Sarah’s angry with Victor but Maggie knows he’s suffering too. Claire going to Bayview was difficult for him too. Maggie thinks she needs to be stronger but Sarah insists her mother is strong. Maggie reveals she’s frightened. She was sober for over 30 years. Drinking never crossed her mind then but everything tempts her now. Sarah begs her to ask for help when she needs it. They embrace. Sarah suggests a quick few days in rehab with outpatient counseling. Maggie will consider it. Maggie feels bad that she’s been judging Rex while Sarah’s been so accepting of her. She’s turning over a new leaf. Later, Xander turns up. He can’t find the vodka or any other booze. Sarah removed it. He asks why Chloe was wearing his gift to her. He felt humiliated. Sarah feels bad. She tells him that her mom almost fell off the wagon so she got rid of all of the alcohol. Xander hopes she can be a part of his life. Sarah isn’t sure Rex would like it. She gets a call from the hospital about a girl who is refusing to eat. She shares it with Xander, who is horrified to learn that starvation is a painful and devastating way to die. Later, Xander packs loads of food for his prisoners. Hope follows him to the tunnel.

At Salem Inn, “Nicole” is pissed about being fired and thinks it’s time Kristen DiMera showed herself. She removes the mask and gripes about everything. She trashes her room and finds a gun, prepared to end them all. Abe arrives. The door is open and he walks in to see the mess Kristen left.

Kristen arrives at the tunnels and Kate gasps. “Oh my God. You are alive.” Kristen replies, “That makes one of us.”

Julie walks in on two people getting a little romance in her office.