Wednesday July 10, 2019: On Days of our Lives today, Chloe lets Gabi know that she heard about her plan to take Stefan down, Ciara reels from Claire's situation, and Eli lets Hope know that Eve stole evidence. 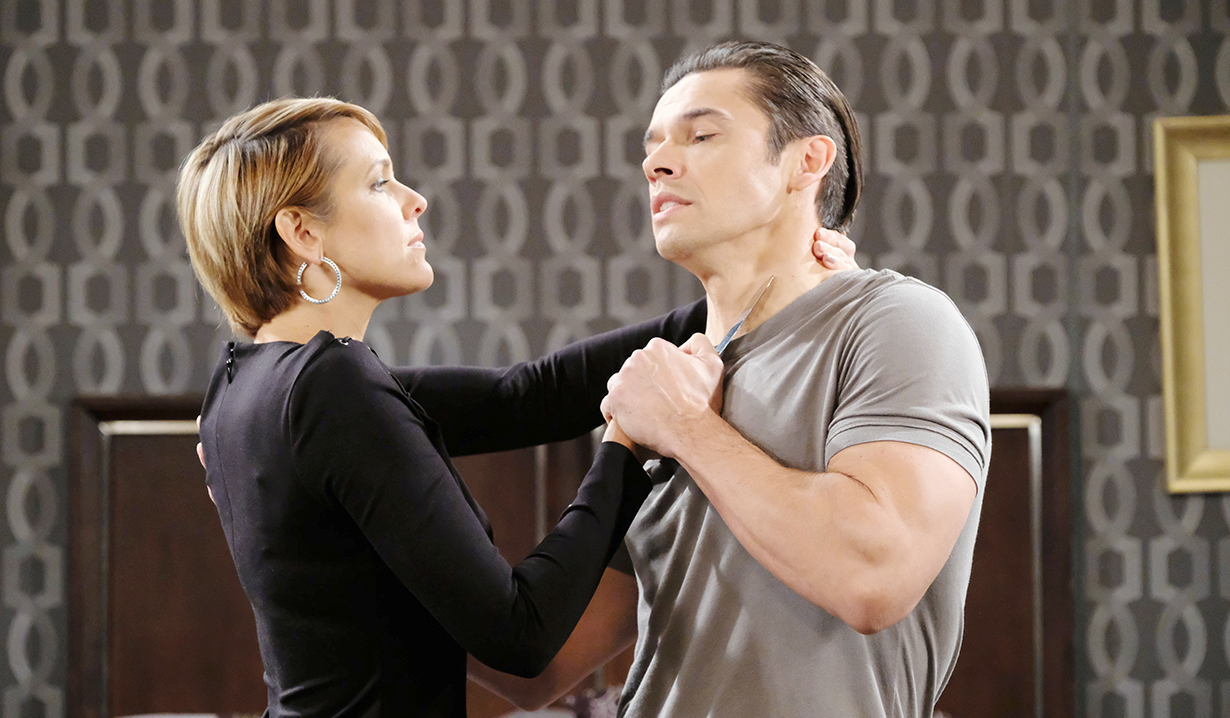 Ciara looks at photos of Claire on her cell phone at Ben’s and bemoans her niece’s fate. Ben lends support with a hug. Ciara brings up her past with Chase and how lost she felt and how guilty, angry and sad she feels that someone with so much love and talent was ready to throw it all away. Ben talks about getting a second chance in his own life and he’s grateful someone cares for him. He never thought that would happen when he was in Bayview. Her love helped him let go of some of the pain, guilt, and sadness. They kiss but Ciara feels to guilty to make love. Ben convinces her to do it anyway.

In the tunnels under the DiMera mansion, Kate and Ted argue about whether or not Nicole will let Xander return to feed them or if she’ll have them killed. Ted finds a raisin on the floor and offers it to Kate. She ignores him and explodes because of his optimism when he says he’s sure Hope will save them. Ted spills to Kate concerning the car crash and Holly’s fake autopsy report. Kate’s disgusted and calls this his fault. She grabs a broken bottle and toys with getting even with him.

Eli arrives at Brady’s pub and tells Hope that Claire’s cell phone was missing from the evidence locker when he got to SPD. Hope isn’t surprised. Hope confides that Ted Laurent is missing and Xander’s behind it. Eli curses. He got an anonymous 911 tip on Ted being murdered when Eve stopped him from following up. Hope couldn’t file a missing person report until she knew for certain he was missing. She fills him in on Ted’s texts and the diamond necklace. Eli texts someone and they get the anonymous call. Hope recognizes Kate’s voice. Eli goes off to handle it.

More: Ambitions episode 4 recap has a big reveal at the end 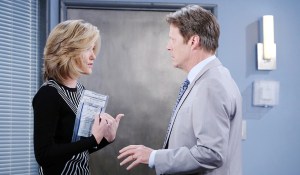 Claire’s murderous attempt and says she’s been committed to Bayview. She tells Jack she stole Claire’s phone because there’s incriminating evidence on there. She was set on framing Ben and should have gone to her family but she didn’t know things would get this far. Jack believes her. They hug and he tells her she needs to let Ben go. Eve hollers that she can’t but Jack insists.

Gabi finds Chloe at Doug’s Place and questions if Nicole booked a party there. Chloe says she never did. Gabi’s frustrated. Chloe doesn’t care. She doesn’t want her business. Gabi apologizes for screwing Stefan. Chloe calls her apology insincere. She knows why she seduced Stefan. Brady told her about Gabi’s plan to destroy his life. Gabi asks if she’ll reveal it to Stefan. She says no. She’ll even help if Gabi wants. Stefan walks in and Chloe decides to let them have the venue for triple the rate. Gabi rants to Stefan about Nicole bailing again so he calls Nicole.

More: Days column on the many faces of Jack

At Salem Inn, Kristen holds a letter opener to Xander’s throat and asks for one good reason why she shouldn’t slit his throat for double-crossing her. Xander doubts she’ll follow through. She didn’t kill Ted or Kate when she found them. Xander flashes to Kristen revealing she saw them in the secret room. “Nicole” will kill him if he doesn’t finish the job. She overheard them trying to escape. They were planning to tell the world that Kristen was pulling Nicole’s strings. “Those two clowns are close to discovering the truth.” When Stefan calls, she ignores it and becomes angry. Xander tells her Hope’s getting suspicious too but he still won’t kill Ted and Kate.

Back at Ben’s, after sex, he and Ciara are excited when Justin texts to tell him all charges are dropped and Eve and Jack are holding a press conference. They watch on his cell as Eve throws Hope and Eli under the bus as she reveals that the real arsonist was revealed.

Back at Doug’s Place, Gabi makes the Hernandez margarita and Stefan coughs at how powerful it is. “Nicole” shows up. Stefan fires her.

Xander finds Chloe outside the pub with his necklace on. He asks where she got it. She tells 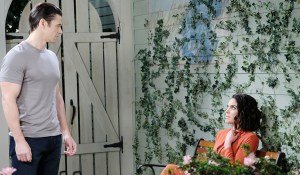 him Brady gave it to her. He finds it beautiful and she agrees. She leaves and Xander wonders if Sarah knows she has it. When Hope calls Kate’s phone, Xander assumes she’s on Kate’s trail.

At the square, Jack congratulates Eve. Later, Hope finds Jack. She saw the press conference and asks if there’s no limit to his corruption. She tells him the people of the town are scared to get in his way. He’s surprised and says they don’t need to be. Nearby, Eve calls Ben. On speakerphone, Ben answers and she taunts him, saying what he’s done will follow him for the rest of his life. She’ll make him pay for murdering her kid.

At home, Xander is taken in for questioning for suspicion of murdering Ted Laurent.

Claire Says Goodbye to Family and...