Tuesday July 9, 2019: On Days of our Lives today, John has bad news for Victor, Tripp has a surprise visitor, and Eli makes an accusation of Eve. 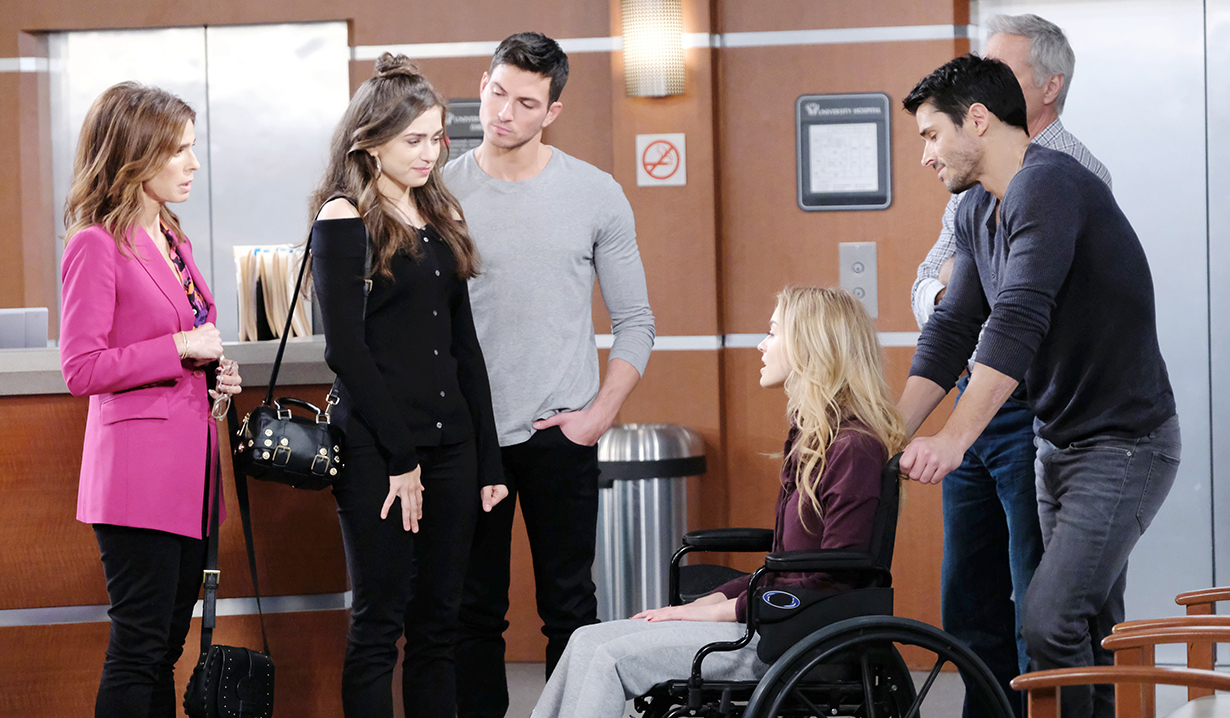 At the loft, Tripp hears a noise after showering – Haley’s come in through the window. 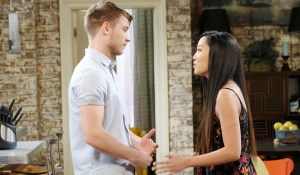 She forgot her key. Tripp learns she didn’t have to go to China. He’s thrilled. They discuss Claire trying to kill them. Tripp can’t wrap his head around it. Haley feels guilty because they got married. She thanks Tripp for everything. They embrace. Haley explains she’s staying with JJ and hoping to get her job back. Tripp encourages her – his ex-wife is kind of special. 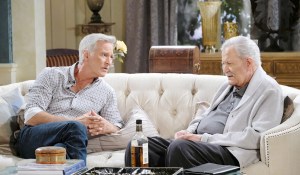 Victor has John get the bourbon. John explains Ciara’s fine and they’re waiting to learn whether Claire will go to Bayview or stand trial. Victor wants to gas up the jet and get her out of the country. John gently dissuades him. Victor admired Claire for being a little troublemaker, but this is incomprehensible. How could no one have realized? John tells him about Eve, and Victor calls her a low-life piece of trash. He asks John to ensure Claire gets everything she needs…and give her a hug from him.

At the park, Eli updates Hope on Eve knowing Claire was unstable and not doing anything. Hope hollers and tells Eli that Ciara could have died! Hope tells Eli to move Claire’s cellphone somewhere that Eve can’t find it – she doesn’t want her slithering out of this.

In the hospital waiting area, Marlena vows to Ben and Ciara that Eve will go to jail. Ciara worries about Claire. Marlena explains they’re waiting to see what the court recommends. Ben talks up Bayview. In Claire’s room, Belle’s hoping the judge will recommend treatment for her daughter. Shawn agrees Bayview’s their best hope. When they leave, Eve appears to beg Claire’s forgiveness – she didn’t help her, but she should have. She’s so sorry. Claire refers to herself as a monster as she recalls trying to kill Ciara again. She should have just torched herself. 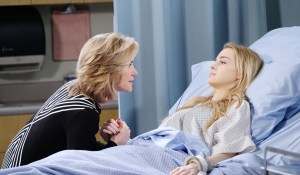 Eve responds, “Don’t you ever say that.” She reveals she took a bottle of pills at Claire’s age, but made it through and so will Claire. Eve maintains that she was so hellbent on framing Ben she didn’t make sure Claire was alright. She’s explaining Claire’s grandparents found their messages when Marlena and Ciara enter. Ciara gets confrontational with Eve until Marlena intervenes. Ciara warns Eve will lose everything she loves – it’s exactly what she deserves. Eve insists she feels terrible. Marlena thinks that’s because she got caught. Claire protests that Eve’s completely innocent. Marlena takes Eve out. Claire can’t understand why Ciara doesn’t hate her – she hates herself. They tear up as Claire says she’s so sorry. They recall their childhood and being envious of one another, then agree they’d like to go back to being best friends. Shawn and Belle return. They heard from the judge. Outside, Marlena accuses Eve of playing on Claire’s sympathies. 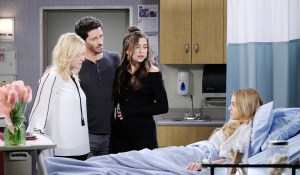 Ben insists she knew Claire set the fires. Marlena warns Eli has Claire’s phone and it will sink her. Eve snaps, “We’ll see about that.” After, Ben feels they should focus on Claire and Marlena remarks he’d make a good therapist. Ciara appears and relays Claire’s going to Bayview. In Claire’s room, her parents reassure her about Bayview. They’ll stay in Salem so they can visit her. Claire cries she’s ruined their lives. Belle counters if anything, they let her down not realizing she was suffering. Shawn promises they’ll be there now, and they embrace. In the waiting area, Hope tells Marlena she feels she failed Claire. Marlena assures her she can come back from this. Belle appears and Marlena supports her. 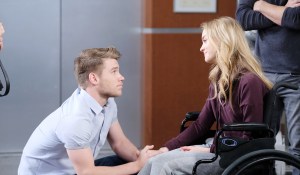 Nearby, John kisses Claire as Shawn wheels her out. Hope tells Claire she loves her. Ciara sniffs that she’ll visit. Claire apologizes to Ben for letting him take the blame – he’s one of the good guys. Ben says people will always have their doubts. Claire expects to face the same thing. Ben advises her to trust the doctors and avoid the oatmeal. Haley and Tripp arrive. Claire is sorry and is glad they’re okay. They never meant to hurt her. Claire calls Tripp kind and sweet – she hopes he finds true happiness. Tripp says she deserves that too. Later, Marlena, Belle and Shawn take Claire to Bayview. 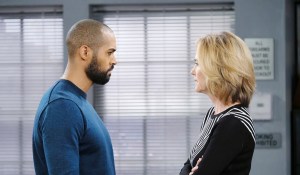 At SPD, Eli confronts Eve – Claire’s phone is gone. She clucks, “Oh dear,” and hopes it hasn’t gone missing. Eli knows she’s the only one who had access. Eve warns him about making baseless allegations if he likes his job.

In the park, Tripp makes amends with Ben.

Ben and Ciara try to process all that has gone down.

Ted and Kate Plan an Ambush Once...