Monday July 8, 2019: On Days of our Lives today, Kate and Ted beg "Nicole" to free them, Sarah and Eric almost kiss, and Hope tells Xander her theory on how he's punishing Nicole. 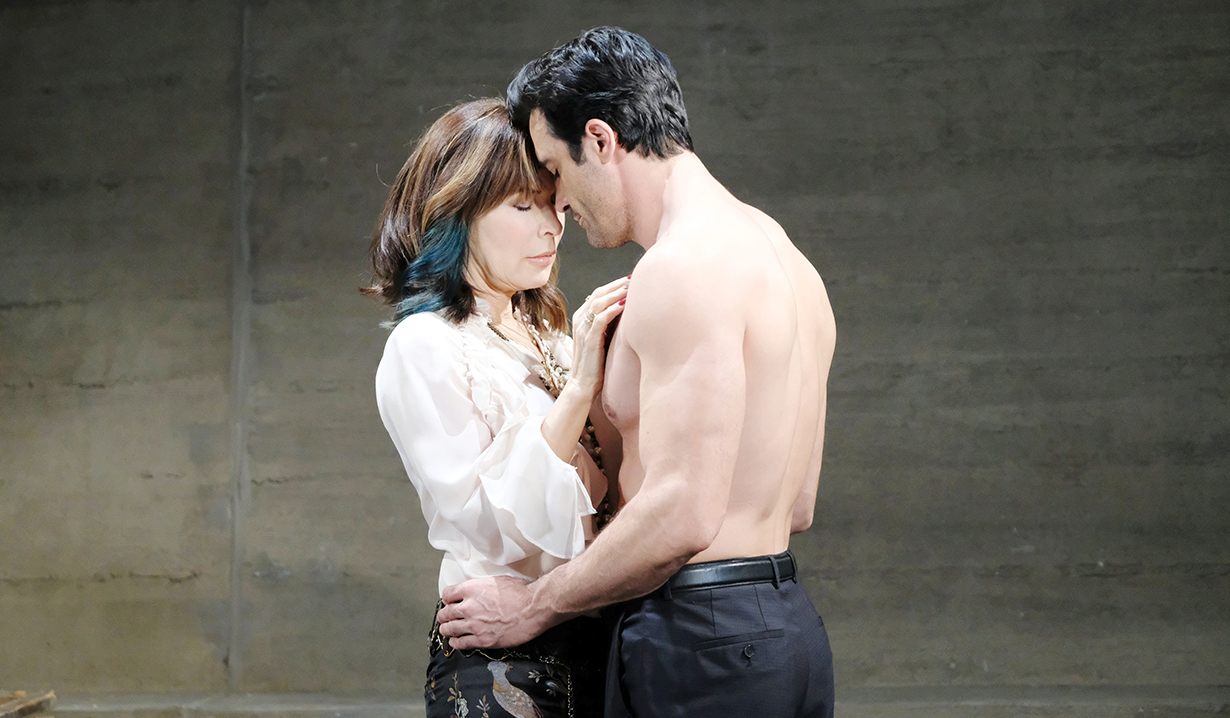 In the hospital chapel, Sarah vows to be there for Eric. They almost kiss when Marlena interrupts. Sarah goes to check on Claire’s CAT scan to rule out anything physiological. Marlena blames herself for Claire’s predicament. She asks what she walked in on. Eric fills her in, leaving out the almost kiss. Marlena encourages him to reveal his true feelings.

In the square, Rex, Chloe, and Brady believe something 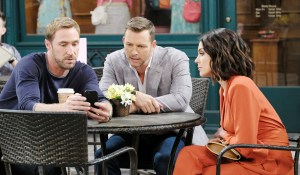 fishy is going on with Kate’s new texts. Brady will call a rep to find out if she’s really in Kuala Lumpur. Rex leaves a message for Kate to tell her his concerns about her. Rex goes and Brady and Chloe discuss the break-up between Chloe and Stefan. Brady’s shocked to hear she found him in bed with Gabi. Brady reveals that he and Gabi scammed Stefan so he’d fall in love what her so that in turn, Chloe would turn to him. Chloe laughs at how desperate that was and Brady knows, which is why he backed out of the scam. Chloe agrees to keep quiet. After all that Stefan has done, he deserves to be destroyed!

At the Kiriakis mansion, Hope tells Xander that Ted told Nicole that Holly was alive. Xander pretends not to know what she’s talking about. Hope thinks Ted saw the autopsy report in his hand and assumes he altered it and sent it to Ted. Xander asks why he would. Hope assumes he was going to demand ransom or punish Nicole by giving her false hope that her kid was still alive. Xander thinks she’s reaching. She accuses him of making Ted disappear and asks if he murdered him. Xander denies that. Hope notices that Xander has a second phone in his pocket and assumes it’s Ted’s. He says it’s for work. Hope realizes it doesn’t look like Ted’s phone. Xander gives her the boot.

At the DiMera mansion, Kristen in the Nicole mask goes to 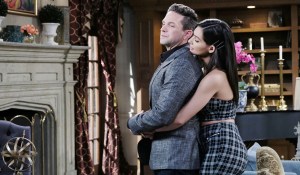 get the champagne from the secret room and is shocked to find Ted and Kate there, alive, kissing. She gasps and shuts the door so they can’t escape. She demands to know what the hell they’re doing there. They explain Xander locked them up. Kate begs to be released, assuming Kristen DiMera is behind this. Ted tells her Holly’s not dead. Kate assumes Kristen’s forcing her to do her bidding. Nicole says Kristen’s dead but Kate saw a red dress in her closet and says Maggie saw Kristen DiMera in her room. “Nicole” finds that very creative thinking and takes off. Ted and Kate wonder if she’ll be back to finish them off. Ted breaks a few bottles of champagne so they can use the glass to hurt whoever returns. Ted forgives Kate for sending him to a deserted island. He deserved it. Upstairs, Gabi’s turned on watching Stefan order Nicole around. She wants Stefan but they need to exercise discretion, especially from Nicole. Nicole returns to the living room and lies that there’s no more champagne. Stefan scoffs. There are cases of it. Gabi’s about to get it herself when “Nicole” apologizes for her behavior earlier. Margaritas would be more fun. “Nicole” wants to head home to rest since she’s still sick. Gabi snorts at how she put in a full two hours. Once she’s gone, Gabi comments that Nicole must have multiple personalities. She realizes that’s a bad choice of words. From outside, Nicole calls Xander.

By the hub at the hospital, Rex has a confession about Chloe. “Please tell me you didn’t sleep with her,” cries Sarah. Rex asks her to trust him. He swore he’d never cheat again. He gave her Xander’s diamond necklace. Sarah’s fine with it. Rex calls his mom but she doesn’t pick up. They agree he should call the cops soon. Sarah wants to plan a beach honeymoon. She just wants to be with him – only him. They embrace as Eric and Marlena watch.

From the park, Hope calls someone to meet.

Back in the tunnels, Kristen finds Xander and before he can open the door, she tells him he has some explaining to do.

Claire Says Goodbye to Family and...