Thursday June 20, 2019: On Days of our Lives today, Sami breaks the news to Will that his grandma is dead, Victor is broken up after hearing of Caroline's passing, and family and friends of Caroline's gather to share stories about the beloved Brady matriarch. 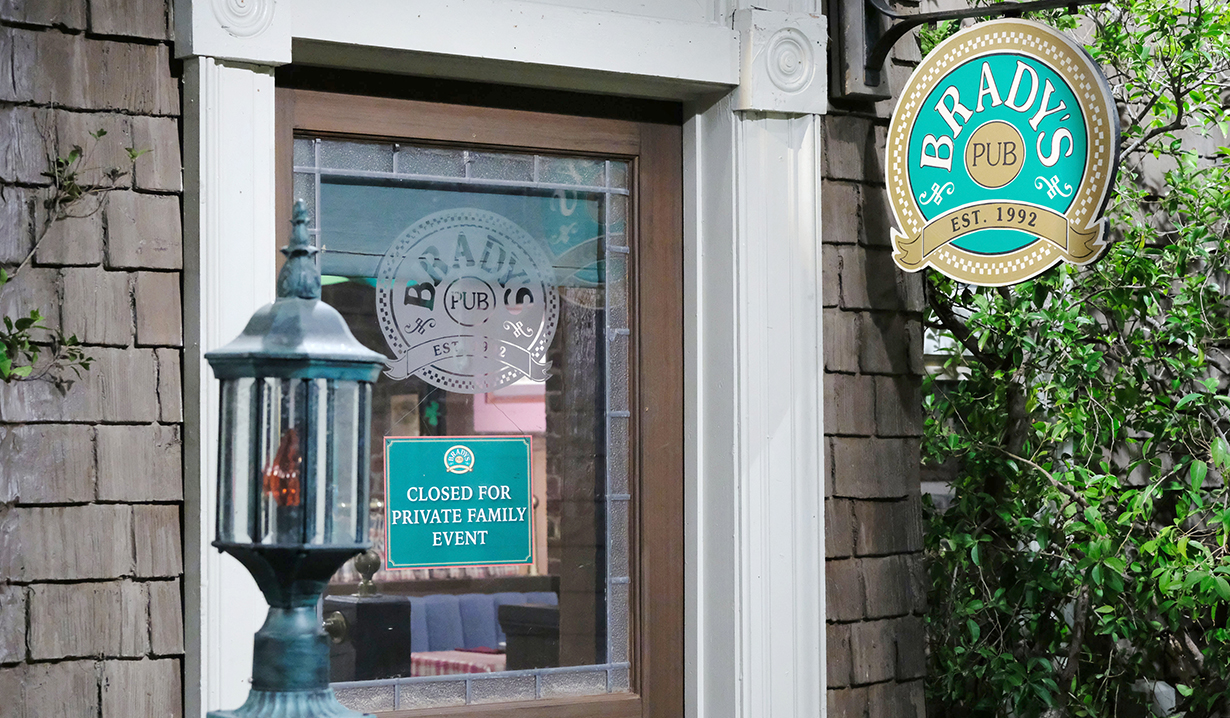 Roman places the “Closed for private family event” sign on the door of Brady’s pub. He and Eric admire a photo of Caroline and Roman states that she asked him for an upbeat wake. They’ll do their best to abide by her wishes. 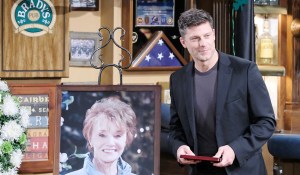 Carrie walks in. Roman’s so glad to see her. They embrace tearfully. Kim had surgery last week and so Theresa’s staying with her. They’ll video chat later. Marlena and John turn up. There are hugs all around

At the loft, Claire feels awkward wearing bright cheerful clothing. Ciara says Grandma didn’t want them in black. Shawn and Hope arrive. They wish Belle could have made it but she had a trial. Ciara bemoans not visiting her grandma. Hope hugs her. Hope brings up Ben’s arrest but Ciara doesn’t want to get into it. Hope agrees it’s fine.

From the square, Hope calls and leaves a message for Ted and looks at the Horton Square plaque. She asks her grandparents to look after Caroline. Shawn appears. They hug.

Sami visits Will in the hospital. Sami says she has something to tell him but thinks he already knows. Later, he’s been told Caroline’s dead and they agree he really did see great-grandma when he died. Later, Sami’s gone and Sonny arrives with balloons. Will explains the sad news. Sonny’s sorry. He found her kind and generous, then worries for Uncle Vic. Since Ari won’t remember her great-great-grandmother, Sonny urges Will to write a profile about Caroline. He starts immediately.

Kayla arrives at the Kiriakis mansion to see Victor. He jokingly asks if she’s there to take a victory lap over saving Will. She says no. She tears up as she admits her mother passed away. Victor asks, “Caroline’s gone? How did she pass?” He learns it was peaceful in her sleep. Kay invites him to the wake. Victor thanks her but won’t go. Kayla knows how much they meant to each other. She agrees to give her condolences to Roman and Kimberly. Once she’s gone, Victor looks in a box which holds items from his relationship with Caroline. He reads a letter and looks at a photo, sadly.

Back at Brady’s pub, Abe, Hope, and Roman discuss Caroline thinking of Hope as a daughter. Hope 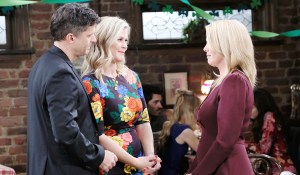 never stopped thinking of her as a mother. Nearby, Carrie tells Sami and Eric how nice it is to be together even under these circumstances. Nearby, Kayla tells Hope that she broke the news to Victor. Hope goes off to check on him, while Kayla hugs Marlena and John. John brings up Steve. Kay lets him know Steve called last night. Roman interrupts. He gets everyone’s attention. They start passing around a photo of Caroline. Everyone gets a turn to tell a story. Abe takes the photo first. He can’t recall a minute when Caroline wasn’t in his life. He was an honorary Brady. It was important to him, especially after he and Theo lost Lexi. He recalls her bringing clam chowder over. John chuckles. He was able to call her ‘mother’ for years and Caroline thought of him as family even after it came out that he wasn’t’ Roman. Marlena remembers Caroline’s faith and feistiness. Everyone laughs as she recalls the strip show Caroline once went to. Ciara holds a rosary that Grandma gave her. It’s gotten her through tough times. 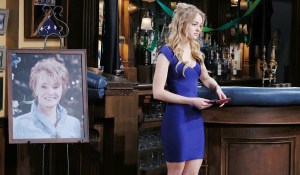 Claire calls Caroline the best at giving advice. She made her want to be a better person. Ciara slightly sneers as her niece talks. Shawn talks next about the postcards from Grandma. She told him about all the “crazy happenings” and reminded him that he always had a home in Salem. Eric next talks about Caroline seeing the best in everyone. He remembers a total stranger at the bar becoming a friend of hers. Carrie calls Grandma a true role model, hard-working and compassionate. Sami says Grandma was there for all of their ups and downs – with a bowl of chowder and often a stern talking to, filled with love. Everyone tears up and Sami believes she brought Will back to them. Kayla reads a message from Frankie and Max who talk about Caroline saving them and how they’ll never stop being grateful to her for loving them. Roman gets up. He tells them that Ma wasn’t a saint. They laugh. Roman talks about his parents being married 60 years. 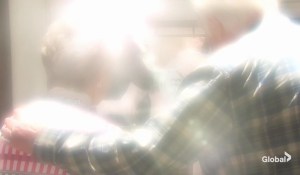 The love they created and the love they shared is all around them. “You can feel it in every bowl of chowder. Every floorboard…” Kayla remembers her mother kicking their butts if they were bad. She remembers Caroline’s sacrifices. Kayla says her mom and pop are finally reunited. They drink “To Ma.” They flash to Shawn talking to Caroline about love, to dancing with her, and Shawn recalling the first time he ever saw her. From outside, the ghosts of Caroline, (played by Holgie Forrester) and Shawn, (played by Drew Snyder) hold each other as they watch their family inside.

Back at Victor’s, Hope appears and takes Victor’s hand. He holds her hand as she says she’ll be there for him. She snuggles him and tells him Caroline and Bo would want her there. He shows her the mementos he kept, including the letter Caroline wrote to him to tell him Bo was his. Victor wanted to steal Caroline from Shawn and it took him time to accept that she’d be better off with Shawn. Victor misses his son today more than ever. Hope cries. She loves Victor and calls him family. He encourages her to go back to the rest. Victor says he loves Maggie but Caroline will always be the love of his life.

Roman Learns Caroline Died in Her...