Roman Learns Caroline Died in Her Sleep, As Will Dies in the Hospital

Wednesday June 19, 2019: On Days of our Lives today, Rex comes up with an antidote for Will, Eric prays, Will sees Caroline's ghost, and Ciara and Tripp start their plan... 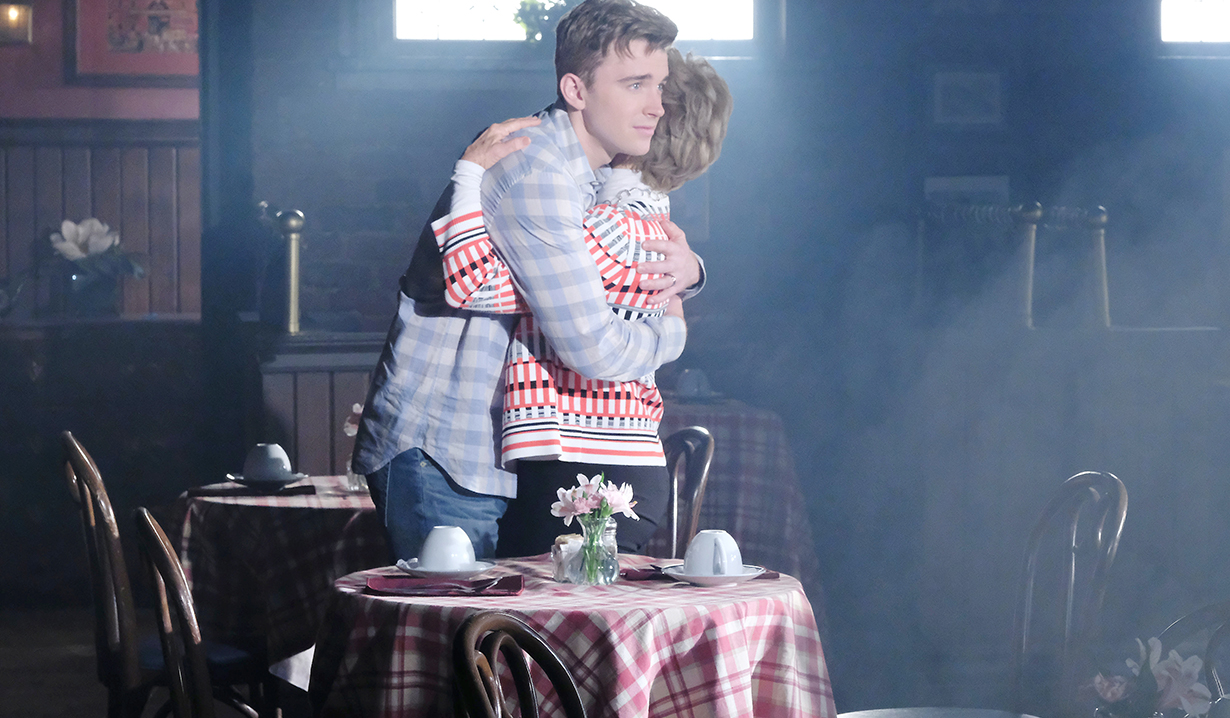 At the loft, Tripp agrees to help Ciara just as Claire walks in. She questions them. Ciara says that Tripp is helping her move out of the gatehouse and back in 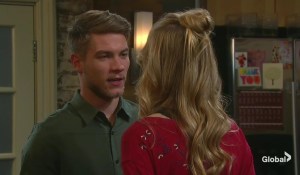 with them. Claire’s fine with that. She hugs Tripp and he flinches. She questions what’s up and he covers, saying he feels guilty. Claire admits she told Eve that Tripp was the one who framed Ben, not Wyatt. Ciara asks why – she thought Claire loved him. Claire blames Eve. Ciara lashes out but Tripp is in no position to judge since he tried to set up Ben. Claire starts bashing Ben until Ciara has a fit. Tripp suggests it’s too soon. Claire’s sorry. She knows getting over Ben will be difficult but she’ll help Ciara get through it. Maybe she should see her grandma Marlena. “You think I need a shrink?” Ciara asks. Tripp interjects before Ciara foils their plan.

At the hospital chapel, Eric holds his rosary and talks to God about how Will pulled their family together, how he’s humorous and that his family can’t lose him again. Sarah appears and tells him Rex had a breakthrough. They talk about him giving up on Nicole. Sarah doesn’t think she deserved him by the sound of it. 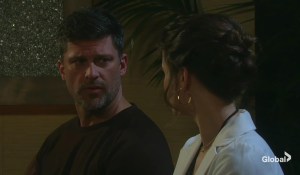 Eric admits his mother is pushing him toward Sarah but he knows there’s no future for them. By the hub, Sami feels guilty for putting EJ ahead of her own son. Marlena orders her not to go there. Lucas loves Will more than anything – and mostly that he has so much Sami in him. Rex turns up, while inside Will’s room, Will flatlines. Kayla enters as Will opens his eyes to brilliant white light.

Back by the hospital hub, Rex tells Marlena, Sami, Lucas, Roman, and Kate that they had a breakthrough with the antidote. Everyone is slightly encouraged, knowing it may not work. Rex heads into Will’s room as Kayla’s trying to bring Will back to life. Will enters a darkened 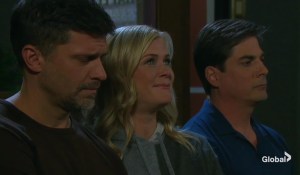 and closed Brady’s pub. Smoke billows around his feet. He enters and sees a photo of himself with Sonny that’s been ripped up and hears his grandmother and thinks of his great-grandma’s speech at his first marriage to Sonny. Kayla tries the paddles on him a few times and he comes back. Rex tells Kayla there’s an antidote. Kayla’s not sure he’d handle it but Sonny begs for her to give it to him. Outside, Lucas and Sami head to the chapel. Sami hugs Eric once she arrives. He encourages her to pray. Back by the hub, Roman, Kate and Marlena bond over their predicament. Roman goes to call Kimberly with the update about the antidote.

In Will’s room, he’s stabilized and Rex injects the antidote into his IV. 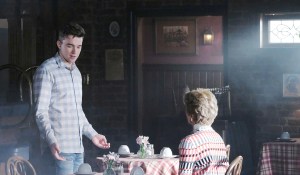 Rexy hopes that it’ll shrink the tumor and reduce the pressure on Will’s brain. Back into the light, Will has a beer and sees that his picture of himself with Sonny is put back together. He sees great-grandma (played by Holgie Forrester) and calls her name. In Will’s room, Rex goes to get the family while Will continues to see Caroline. Rex later tells the family that Will went into cardiac arrest but Kayla brought him back and he’s been given the antidote. Kate gasps and runs to the chapel. She tells everyone that they need to see Will. Everyone piles into Will’s room and Sami begs him to come back to them. Will asks his grandma if she’s sure. She nods. He thanks her for telling him. He now understands why she’s there. They embrace and the brilliant light returns as Will’s vitals get stronger. Will opens his eyes and then jokes about them having nothing better to do than hang out there. Everyone laughs through tears. Roman and Kate return to the waiting area while Will recalls to Sami, Lucas, and Marlena, everything he saw in the bright light. He mentions the torn wedding photo. Sonny says he told someone outside the room that he tore up his wedding photo. Will could never have heard it but Will says it’s fine – the photo was back together. It must mean they’re destined to be together. He recalls talking to Caroline and tells them the whole story, and that she told him now wasn’t his time. He came back because of grandma. Sami says it’s not like he was “on the other side. Grandma’s still alive.” Meanwhile by the hub, Roman calls Kimberly to tell her they found a cure for Will. He listens for a moment and then weakly says, “What? What do you mean?” He disconnects and tells Kayla that Caroline has died in her sleep. “Kay? Ma’s gone. Kimberly said she died just a little while ago. In her sleep. She’s gone, Kay. She is gone,” he says, weeping. They embrace, sobbing.

Sami and Lucas Return to Salem As...

Family Gathers to Say Goodbye to...