Tuesday June 18, 2019: On Days of our Lives today, Eve conspires with Claire over Ben, Ciara tells Tripp the truth about Claire, and Gabi breaks down in Stefan's arms. 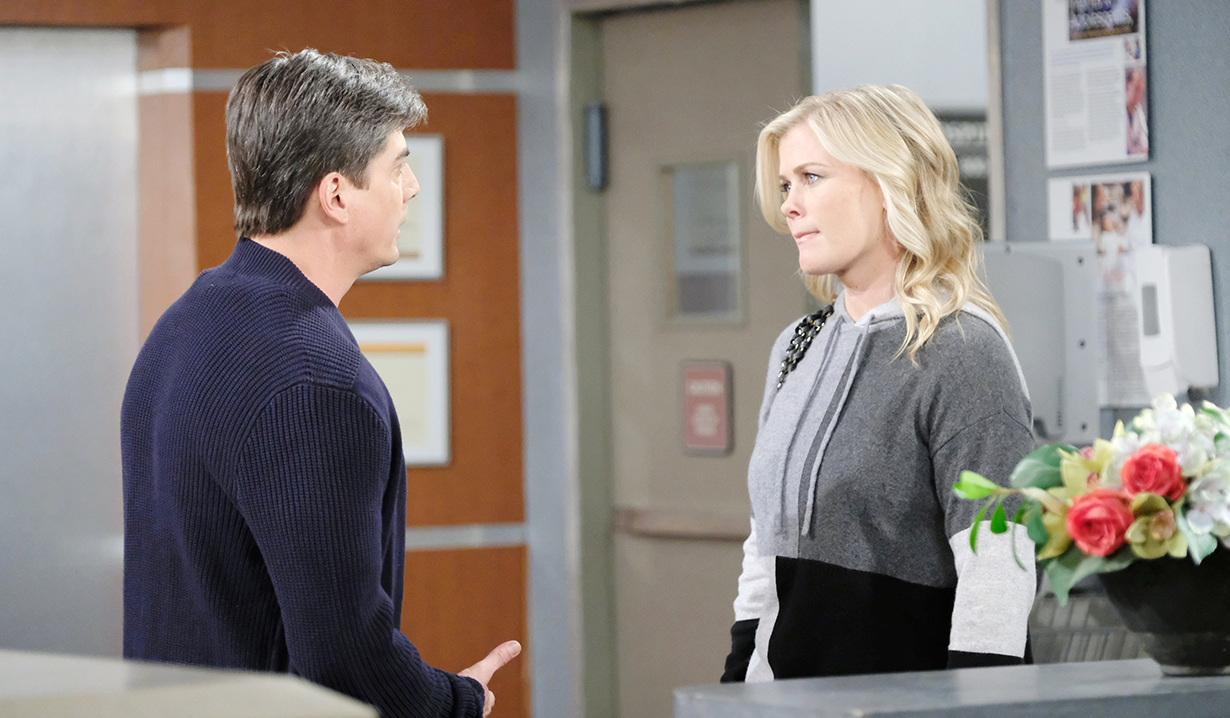 Stefan returns to the DiMera living room and Nicole’s gone. Gabi turns up and hears that Abe and Nicole are working for him now. Gabi admits she’s worried he’s trying to force her out. He says that’s not true. Gabi can’t take another loss. She talks about taking her kid to her dying father’s wedding and breaks down. Stefan comforts her. They talk about the company a little and Stefan’s concerns. Gabi gives him a pep talk.

More: Is a Stefano recast imminent?

At the hospital, Kate is becoming impatient waiting for news on the counter serum for Will. She and Roman comfort each other. In Will’s room, the newlyweds are happy to be married. “The second time’s the charm,” says Sonny. They’re grateful to Marlena and she calls it a privilege to marry them. She goes and the men remember meeting each other in Memphis. Sonny says he never gave up hope. He breaks out the bubbly and Will toasts to the here and now. Outside, Sami and Lucas show up and Sami hugs Marlena while Lucas hugs Kate. 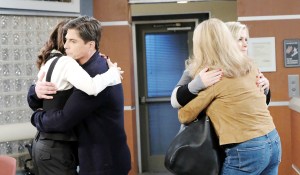 Will’s parents are told that he and Sonny married. Roman pops up and gets a hug from Sami, who has a lot of questions about whether or not Rex and Sarah saved Will. Roman says they’re close. Sami goes into panic-mode and Lucas tries to calm her nerves. They head into his room and there are hugs all around and congratulations on the guys’ wedding. They reminisce about Will and Sonny’s first wedding. Sami wishes Grandma Caroline could be there but she’s too weak to travel. Sonny gives them space and Will tears up, glad his parents made it. Through tears, they tell their son there’s nowhere they’d rather be. He’s been there for him. Lucas says he’s 19 months sober because of him and Sami. If he doesn’t make it, Will makes Lucas promise not to drink. He vows not to. Outside, Sonny takes a call from his folks about the wedding and then to Roman about the pain over Will. Later, Lucas heads outside to Kate. She says she just called Carrie and Austin. Lucas is reminded of all the times he’s let his son down as a father. Kate reminds him of how much good he’s done. “You were the one who went to prison for him.” Kate respects him as a father. This shocks Lucas. Meanwhile, Sami wants to call various specialists but Will won’t let her. She starts to cry again and sobs into his arms, telling him she’d do anything for him. Sonny returns and Sami asks if Kayla has news. She doesn’t so Sami runs off to “throw a fit… or a chair. Whatever it takes to save my son,” she cries, before running out. Roman catches her outside the door and stops her with a hug. In Will’s room, Sonny refuses to give up but Will’s monitors start beeping and he crashes.

From her hotel room, Eve calls the hospital to ask after Will. 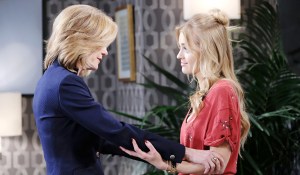 She throws around her commissioner title but gets nowhere. She’s grateful that at least they have the diary. Claire arrives happy that though Ben thinks she’s the arsonist that Ciara doesn’t believe him. That means nobody will. Eve wants Claire to “Throw Tripp under the bus.” Claire doesn’t want to. She loves him. Eve knows he’ll never take her back so she needs to take care of herself. Eve starts scheming and then suggests Claire get therapy. Claire refuses. She’ll give Eve a statement but states that what happens to Tripp is up to her. She goes and Eve looks at a photo of Paige and promises to bring her murderer to justice.

More: Salem fire pokers get a lot of action 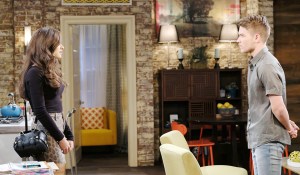 Tripp says it’s no thanks to Ben. Ciara lets him know that Claire set both cabin fires. She fills him in on everything she knows so far and Claire’s motivation for setting this fire. They try to figure out what Claire’s motivation was the first time and realize Claire was jealous of Ciara. Ciara calls her sick. Tripp agrees to help her just as Claire walks in and questions what he’s helping with.

Will and Sonny Remarry With Marlena...

Roman Learns Caroline Died in Her...

The Handmaid's Tale Cast, EPs and Scribe Break Down Janine's Choice, Rita's Revenge and More (Plus: What Was That Milk Really Made Of?)