Tuesday June 11, 2019: On Days of our Lives today, Gabi learns that Will and Sonny will remarry, Ben and Ciara come up with a plan to dupe Claire, and Haley's tired of running from the law. 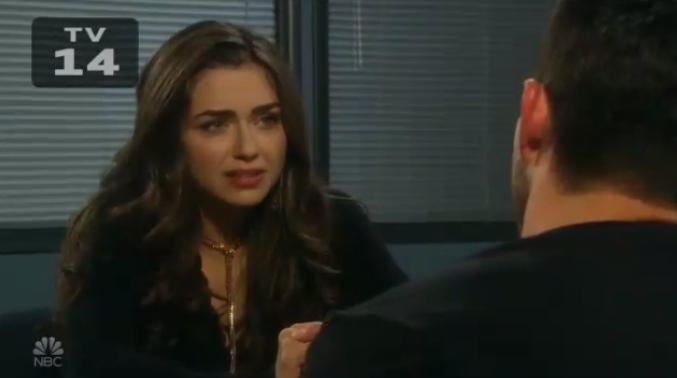 In Will’s hospital room, Sonny accepts Will’s proposal as he almost tears up. Gabi arrives, worried about Will. Kayla tells her the tumor is likely caused by Rolf’s serum 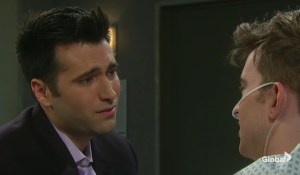 but since they don’t have the formula, they can’t fix it. They’re running out of time. Gabi laments being self-involved and not noticing what was going on. Back in Will’s room, he and Sonny kiss and Will lets his fiancé read his journal which is about Will regaining his memory and their love.

Outside the pub, Jennifer knows Jack won’t give up on finding Haley, but JJ doesn’t care. He refuses to rat her out. Jenn later finishes a call with Abigail while JJ gets coffee. JJ returns and Jenn’s texted about the fire at the cabin. JJ panics. “That’s where I left Haley and Tripp.”

At the Horton Cabin on Smith Island, Eli saves Haley’s life and has to take her in. Tripp tries to fight him and though Eli doesn’t want to, he arrests Tripp too. Haley coughs as she tries to lie that Tripp was trying to talk her into turning herself in. Eli takes them in.

At the square, Ciara and Claire rush to SPD after hearing about Ben’s arrest.

At SPD, Ben becomes angry while Eve taunts him and tries to blame him for setting the cabin fire. She threatens to restrain him, and he calms down but stays firm and denies the charges. Claire and Ciara show up and Eve tells them that Ben tried to kill two people. Claire acts surprised and asks if they’re okay. While Ciara goes to see Ben, Eve tells Claire she has some explaining to do. In the interrogation room, Ben tells Ciara that Claire set the fire. Ben tells Ciara about hearing Claire’s cell phone ring tone the night the fire was set in the first cabin. Ciara tears up in shock as she realizes Claire tried to kill her. She begins to realize that Claire also wanted to kill Tripp and Haley. Ben asks her to keep it confidential for now. He has a plan. In Eve’s office, Claire rails at Eve about Tripp’s fake passport and how “He was going to leave me for that little bitch. I love him too much to let that happen and if I can’t have him, no one can.” Eve won’t turn her in. She offers to charge Tripp with aiding and abetting but Claire doesn’t want that. Eve looks concerned as Claire admits she just wanted to see Tripp and Haley burn, making Claire wonder what’s wrong with her. Eve says to pull it together. She asks if anyone saw her. Claire says no. Eve lets Claire know that Ben suspects she’s the firestarter. Claire is terrified, thinking Ben’s filling Ciara’s head now. Eve orders her not to set any more fires before she goes. In the hall, Ciara finds Claire and tells her Ben swears Claire set the fire but she doesn’t believe her. Claire embraces her as she flashes to Ben’s idea for Ciara to turn on her so Claire will let her guard down. In Eve’s office, she calls Ted, asking him to return as DA.

Back at the hospital, Eli and Tripp wheel Haley in on a stretcher. She’s not doing well. Kayla takes them into a room.  In Will’s room, Sonny finishes a call with 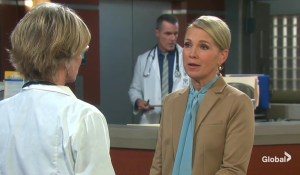 Adrienne who sends her love Gabi rushes into Will’s room in a lather. Will hugs her as she has a fit over Will dying. She isn’t sure she can get through this. They tell her about the upcoming wedding and she becomes excited. She gives them a ring and asks Will to make it official so Will asks Sonny once again to marry him. Gabi hugs them. Outside, Tripp fills JJ and Jenn in on how Rory didn’t make it to the cabin and that Eli says Ben started the fire. Jenn goes to take a call while Kayla returns and lets JJ see Haley. He runs off while Kayla urges Tripp to get examined. Once he’s gone, Jenn returns, and Kayla summarizes Will’s tumor and how they need Rolf’s journal in order to find a cure. Jenn’s angry to hear Eve was the last person to have it and takes off to talk with her. Meanwhile, Eli lets JJ visit Haley alone. She’s on oxygen and learns JJ’s on bail. She tears up, apologetic that she dragged him into this. He’s not concerned and suggests they get Tripp to cause a distraction so they can take off. Haley’s tired of running. Tripp finds Eli and thanks him for not arresting him. He hates being involved in Jack and Eve’s agenda but has to follow the law. 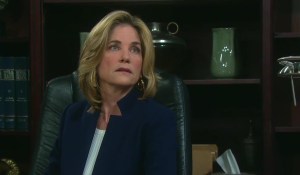 Jennifer shows up at SPD and tells Eve that they need to talk.

Jenn and Eve have an argument.

Will Asks Sonny to Marry Him Before...

WarnerMedia CEO Jason Kilar Urges His Team “To Continue To Keep Focus,” Said To Have Hired Legal Team To Negotiate Exit After Just A Year At Helm

All Rise Cast Reacts to Cancellation