Monday June 3, 2019: On Days of our Lives today, Kristen accuses Eric of hurting her, Stefan hurls accusations at Gabi for harming his relationship with Chloe, and Julie has a run-in with Jack. 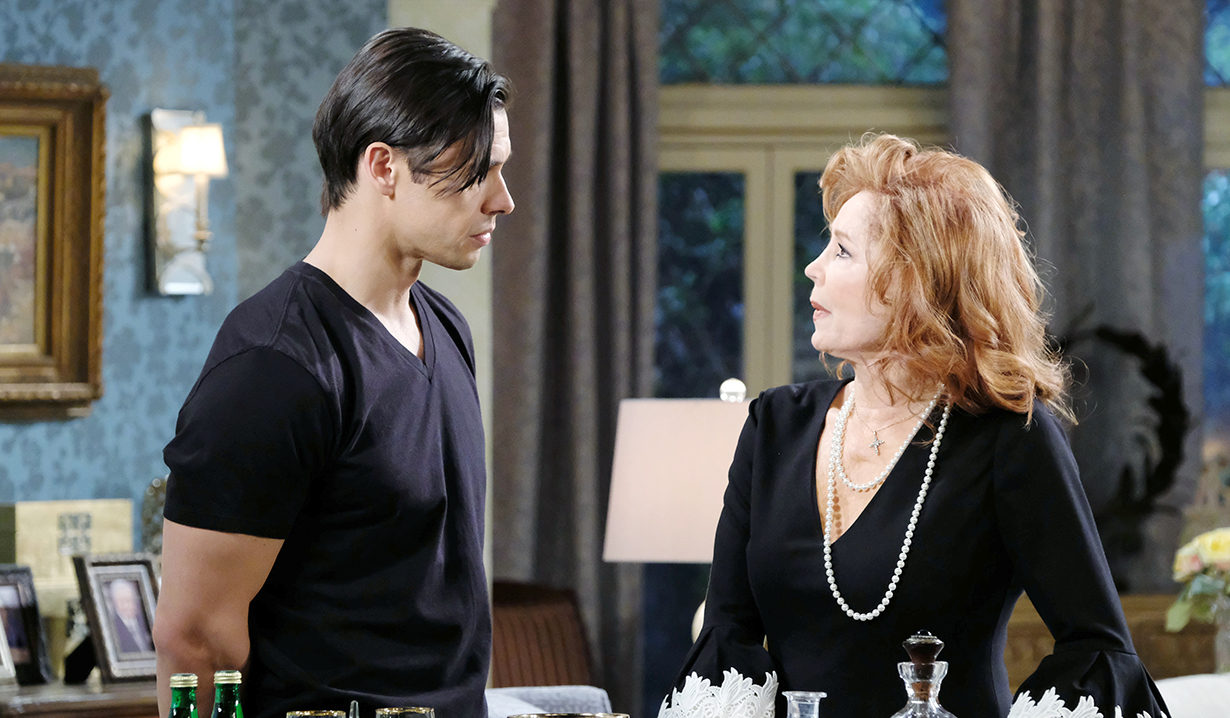 At Doug’s Place, Julie tells Chloe to take the night off. 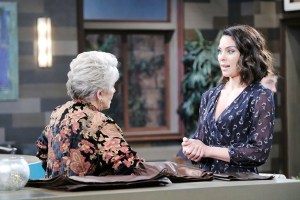 Chloe insists she needs to be working and picks a fight about napkin colors. Julie holds her partner’s hands and lets her know it’s alright to be grieving. When Eve and Jack enter, Julie snaps that they’re closed. Chloe contradicts her and says they’re open. Julie drags Jack away and wants to discuss Jennifer. Jack’s not losing sleep over Jennifer calling him a terrible person. Julie says he is a terrible person. She doesn’t like what he did to Hope or JJ. Jack says JJ broke the law like his mother. Julie’s stunned to hear Jenn’s in jail and laughs at the reason why. Jack admits Jenn thinks he had a memory but what he wonders if he just read about Jenn once disguising herself as a guard. Julie believes it was a memory. While they talk, Jack remembers that Julie’s still “an excruciatingly relentless cow.” Julie sighs. Meanwhile nearby, Chloe reveals Stefan’s dalliance with Gabi. Eve calls him a dog. She’s sorry. Eve begins to open up about her own issues with Rolf’s diary when Jack interrupts. They’re leaving.

Maggie sneaks into the living room and pours a glass of booze. Xander appears for a nightcap and is nonplussed at seeing Maggie drinking. He asks Mags to join him in a toast to Holly’s memory, “God’s newest little angel,” and Maggie runs off to throw up. Xander downs both of their drinks and then goes to help Maggie back into the living room. He gets her some water so she doesn’t dehydrate. Maggie’s surprised at his kindness. He brings in bowls of ice cream and spikes his as he questions her about her drinking. She divulges she’s had over 30 years of sobriety until today and admits she saw Kristen DiMera in Nicole’s room. Xander asks for details and when she tells him, she thinks he doesn’t believe her so wants to go. Xander says his mother drank herself into oblivion when he was a kid. It was awful, so he can’t leave Maggie alone like this. Maggie understands what it’s like to lose your parents. “It’s a loneliness that stays with you forever.” Xander gulps and tears up.

At Eric’s, Rex is frustrated that there’s no information they can use from Dr. Rolf’s notes. Sarah calls Rolf a “real-life mad scientist.” She points out sketchings of a skin-like mask that Rolf created and Rex recalls Rolf tried it in the past with his father. He goes to see Kayla. 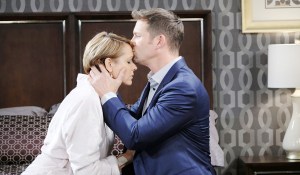 her bloodied arm and accuses Eric of attacking her. Eric’s jaw drops. It was an accident. He loves “Nicole” and would never hurt her. “Nicole” kicks him out and runs into Brady’s arms. Brady confronts her about Maggie seeing Kristen DiMera in her suite, earlier. “Nicole” feigns being mystified and admits Maggie was drinking. Brady asks about the red dress and “Nicole” acts offended. She sees the red fabric under her bed and gasps. She hides the dress and wonders if she’s the reason Maggie’s drinking. “Nicole” gets close and thanks him for all he’s done for Holly. She tries to get close enough to seduce him but Brady has to go. Once he’s gone, Kristen rips off the Nicole mask and trashes her room, angry with Eric because she can’t get into Brady’s pants. Jack and Eve walk by and overhear the commotion. They realize it’s Nicole. Eve says she just buried her daughter. They decide to give her privacy.

In the Hernandez garden, Stefan accuses Gabi of ruining his relationship 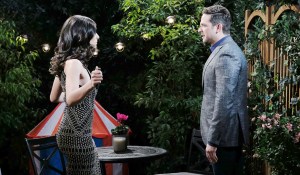 with Chloe. Gabi didn’t force him. She offers to talk to Chloe but he thinks she’d only make things worse. They argue and Stefan realizes this isn’t Gabi’s fault. He apologizes and she accepts. Once he’s gone, she smirks, thinking she played him perfectly.

Eric arrives home and talks with Sarah about the disaster with Nicole. Sarah worries. Does Nicole need stitches? Eric says Brady’s with her and she’s fine, but full of contempt for him. Eric says he looked into her eyes and it was like he didn’t know her.

Rex finds Chloe crying on a bench at the park. 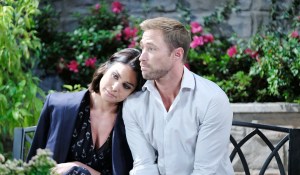 They commiserate over feeling down.

Brady walks in on Xander and Maggie snuggling and passed out on the Kiriakis sofa.

Jack offers his son a deal.

Will Collapses After Another...