Will Collapses After Another Tumor-Related Headache

Friday May 31, 2019: On Days of our Lives today, Xander warns Eve that if Jack knew she had Dr. Rolf's diary, he wouldn't be happy, Maggie tells Brady that she saw Kristen in Nicole's room, and Jenn believes Jack may be getting his memory back. 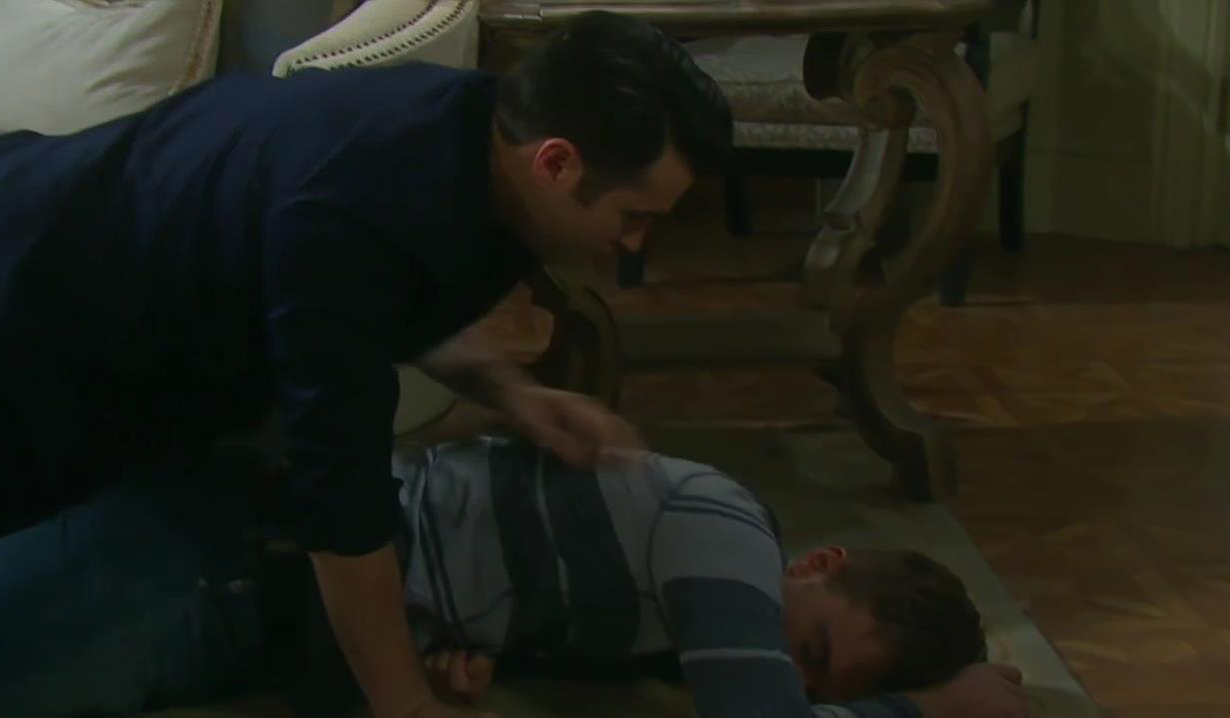 Sonny worries about Will when he can’t find him at the Kiriakis mansion. Will appears. He was checking on Ari. Sonny’s relieved. Will feels lucky to have a daughter like Ari but he hypothesizes that he’s being punished for being irresponsible by being with Gabi and bringing Ari into their lives. Ari has no stability. Sonny rebuts that she’s loved by everyone. 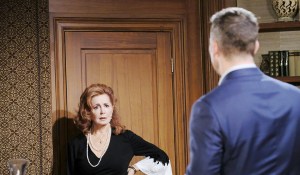 Will just hopes he’s around to raise their daughter. Sonny’s encouraging. They’re not going to give up. Brady gets off a call with the police as Maggie saunters into his room, drunk. Brady knows Sonny caught her with a bottle. She needed it. Brady reminds her she taught him that drunks are cunning. He never thought she’d throw him under the bus like this. He learns that she went to confront Kate who denied being interested in romance with Victor. Maggie bawls and tells Brady she went to see Nicole next and found Kristen DiMera “in a bright red dress” in her room. Brady’s skeptical. Maggie relays the whole story. Brady vows to check into it for her if she rests. He puts her to bed and goes. Downstairs, Will and Sonny eat ice cream. Will’s head hurts. He laughs it off as a brain freeze but moments later passes out. Sonny calls 911.

In her office at SPD, Eve wants Xander to give her Dr. Rolf’s diary back. Xander warns that she’ll lose everything if Jack gets his hands on the serum. Eve explains she needs it for Will who has a brain tumor which could be caused by the serum. 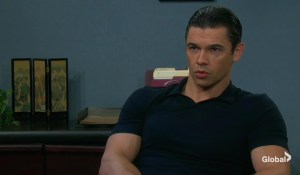 Xander doesn’t care what happens to Will. Eve’s disgusted with Xander. Will has a child and she can’t stand by and watch his daughter mourn her father. They go back and forth. Eve suggests she pretend a ‘concerned citizen’ dropped it off at the police station. He refuses and threatens her so she threatens him right back. In the interrogation room, Jack plans on charging Jennifer with assault. He chides her about what the headlines will be in The Spectator and then taunts that she’ll go to prison. “A real prison, not pretending to be a guard.” Jennifer gasps and explains that what he said was a memory of their past. She tells him about being framed for murdering Peter Blake. Jack looks frightened. He likes his life with his beautiful wife and doesn’t want his memory back. Jenn doesn’t think he has a choice. Later, when Jenn refuses to tell him where JJ is, Jack goes to get the guard to take her to the cells. Jack appears in Eve’s office and demands to know what’s going on. Xander lies that he’s congratulating Eve on her new job and offers solid testimony on Jennifer. He goes. Eve tells Jack about Will’s brain tumor. They agree it’s not fair but Jack is hopeful for a miracle for him. They embrace.

More: Robin Strasser’s first airdate on Days of our Lives

In her room at Salem Inn, Kristen talks to Nicole’s mask. Kristen didn’t want to bring her back from the dead but this is her shot at getting Brady back. Kristen recalls a few of Nicole’s naughtier moments and can’t believe Nic chose Eric over Brady. Eric pounds on the door and annoyed, Kristen quickly puts on a voice-changing gadget and tells Eric to go away. 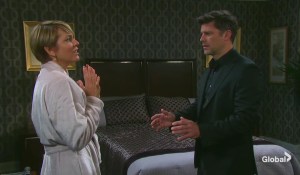 Eric insists he knows what Xander’s up to so Kristen puts on the Nicole mask and lets Eric in. He tells her about Rex catching Xander with the autopsy report. Eric believes Xander’s trying to make it appear as if Holly’s alive. “Nicole” laughs. Eric’s puzzled by her behavior and then questions her after seeing she’s been drinking champagne. “Nicole” toasted to Holly. Eric apologizes. “Nicole” found it funny that Xander is still trying to get into Victor’s good graces. She again blames Eric for Holly’s death and calls him a monster. She tries to kick him out. When that doesn’t work she yells that she hates him. Outside, Brady hears the arguing and pounds on the door. When a lamp is broken when “Nicole” falls while struggling with Eric, Brady busts down the door and asks what his brother has done.

Will is in the hospital hooked up to a monitor. Kayla appears and Sonny worries as she explains that she’s ordered a few tests. Later, she returns and tells them the tumor has grown and pushing on other areas of his brain. She’s sorry. If they don’t find a way to shrink it… “It’ll kill me,” Will says. Kay admits Will could only have a matter of days to live. Sonny gasps.

At the Kiriakis mansion, Xander talks to himself. He’s not handing the diary over to anyone.

Julie goes after Jack and Eve.

Under Hypnosis, Ben Recalls a...

Drunken Xander and Maggie Bond Over...