Under Hypnosis, Ben Recalls a Ringtone From the Night of the Cabin Fire

Thursday May 30, 2019: On Days of our Lives today, Ben wants to be hypnotized, Jenn aids Tripp against Jack, and John goes to Eve on Will's behalf. 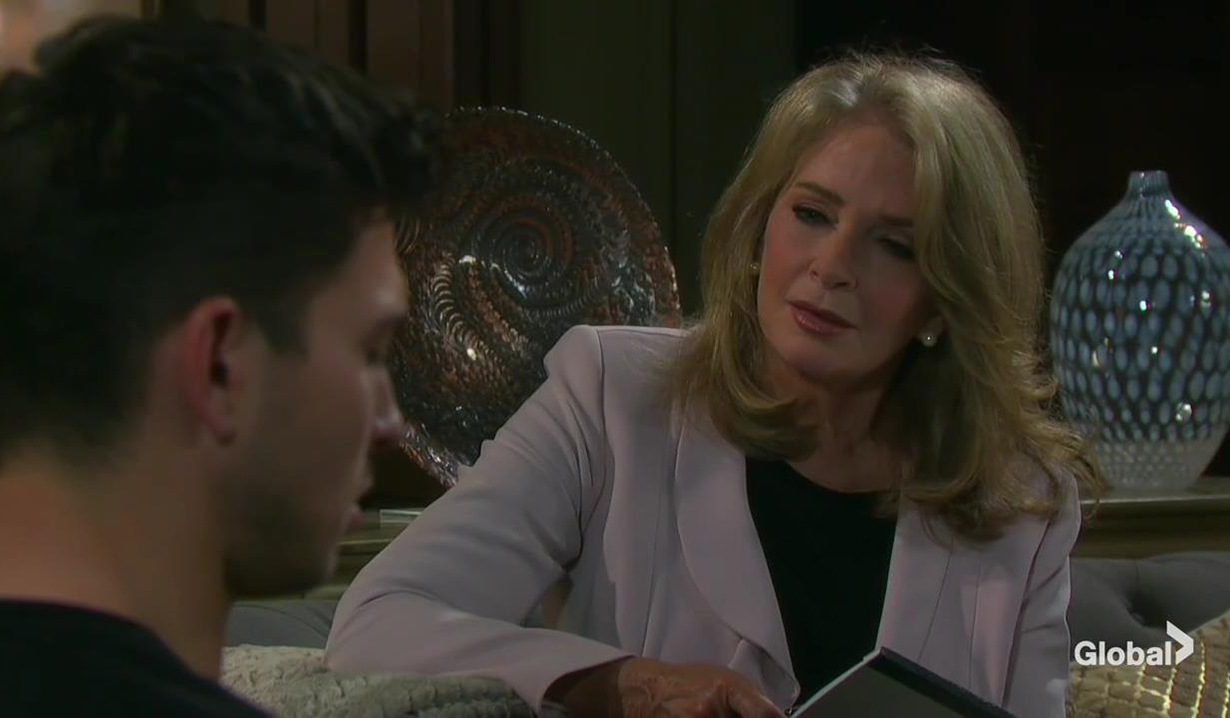 Jack goes to Tripp at the park and asks where JJ and Haley are. Tripp lies that he 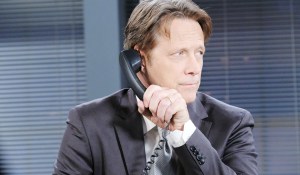 has no idea. Jack knows otherwise. He flashes back while he informs Tripp that he overheard Rory’s calls from SPD to JJ and to Tripp, earlier, about the fake passports. He holds them up and tells Tripp he’s coming to the station with him. Suddenly, Jack’s hit from behind. He crumbles to the ground as Jennifer holds her purse above her head. She grabs the passports and hands them to Tripp and tells him to get them to JJ. Once he’s gone, Jack comes around. He calls Jenn Loretta.

At the Horton cabin on Smith Island, JJ and Haley begin 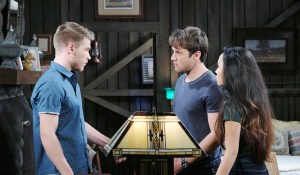 to make love. Haley stops, knowing Tripp will be there soon. Later, Tripp arrives with the passports. He tells them Claire’s behind the taped confession but wants forgiveness so bad that she’s willing to ask Victor for money from her trust fund. JJ asks how they can trust her. It doesn’t matter anyway since they’ll soon be long gone to Canada. Tripp says he took the last ferry, so they all have to stay overnight.

In Xander’s room at the Kiriakis mansion, Xander saves Holly’s medical files as leverage over Kristen. 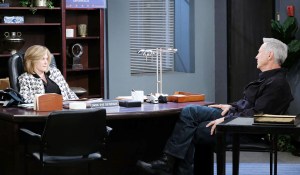 from the hospital. Eve denies wrongdoing and asks why she’d want the diary. John figures Jack would leave her if he got his memory back. Eve looks grim. John keeps poking the bear until Eve asks why he cares. John tells her about Will’s brain tumor and how they think Rolf’s serum started it. Eve’s sorry to hear. John says their only hope is to get the formula so they can replicate it and create a cure. Eve can’t help him so John goes.

At the DiMera mansion, Ben asks Marlena to hypnotize him. He thinks he can remember something from the night of the fire. Marlena asks ‘why now’? Ben mentions Eve attacking him at the square. He knows as commissioner, she’ll come after him. He told Eve he’d give his life to bring all of his victims back but since he can’t, he needs to find out who set the fire so he can protect himself. Dr. Evans puts him under. He flashes back. He remembers everything as before and Marlena brings him out of the hypnosis. He’s learned nothing new but feels he’s missing something. Marlena agrees to try something different. She asks not just what he saw this time but what he felt and heard. He heard a little song (it sounds like a cell phone ringtone). Marlena brings him out of it and he hums the notes he heard. He can’t figure out where the music is from. After thanking Marlena for her help, she leaves.

Ciara arrives at the loft with Maggie’s figurine fixed. Claire’s touched and grateful. They embrace and Claire starts complaining about Tripp leaving her for another woman. Ciara understands that’s why she smashed Maggie’s figurines and suggests she talk to Marlena. Claire is offended. She doesn’t need a shrink. They talk about Hope losing her job to Eve and how Eve’s got it in for Ben and she gloats about how amazing Ben is.

More: Days column on the surprise of being team Claire

Xander finds Jenn and Jack at the park. He overhears Jenn claim she saw Jack lying on the ground and came to help him but Jack assumes she’s the one who hit him. Xander claims to have seen it all and says Jenn hit him and told “the kid” to take off. Jennifer starts to walk away but Xander makes a citizen arrest. Jenn tries to appeal to Jack but he wants to uphold the law. They take her downtown.

Xander and Jack bring Jennifer into the Salem Police Department and explain to Eli what went down. Jack demands Eli book her and find out where “my son and the illegal immigrant are.” Jenn yells that she hopes they’re long gone by now. Later, Xander tries to act like Jack’s friend but Jack can’t help but remember being sold by Xander to Eve after the explosion. Eve’s the only one he trusts. Where would he be without her? Xander mumbles that he’d be with his ex-wife. Later, Eli goes to Jack and tells him Jenn doesn’t know where Tripp is. He’ll check the security footage from the square but Tripp’s probably long gone. In her office, Eve calls Claire. Her ring tone is the same one Ben heard while he was under. Eve asks for the lighter. Claire got held up so Eve says to hang on to it for now. Meanwhile, Jack visits Jenn in the interrogation room. He will let her go if she tells him where JJ and Haley are. She can’t and blames him for their son being a fugitive. Jack invites her to enjoy the night in jail then. Xander goes to Eve, glad to have a get out of jail free card. She scoffs then asks him for Rolf’s diary.

Maggie has a story for Brady.

Remember this? On this day, May 30, 2014, on Days of our Lives, Gabi confessed to shooting Nick, as Nicole and Eric planned to elope.

Will Collapses After Another...