Tuesday May 28, 2019: On Days of our Lives today, Will's memory and behavior cause him fear, Xander cautions Kristen about her plan, and Sonny believes Brady's fallen off the wagon. 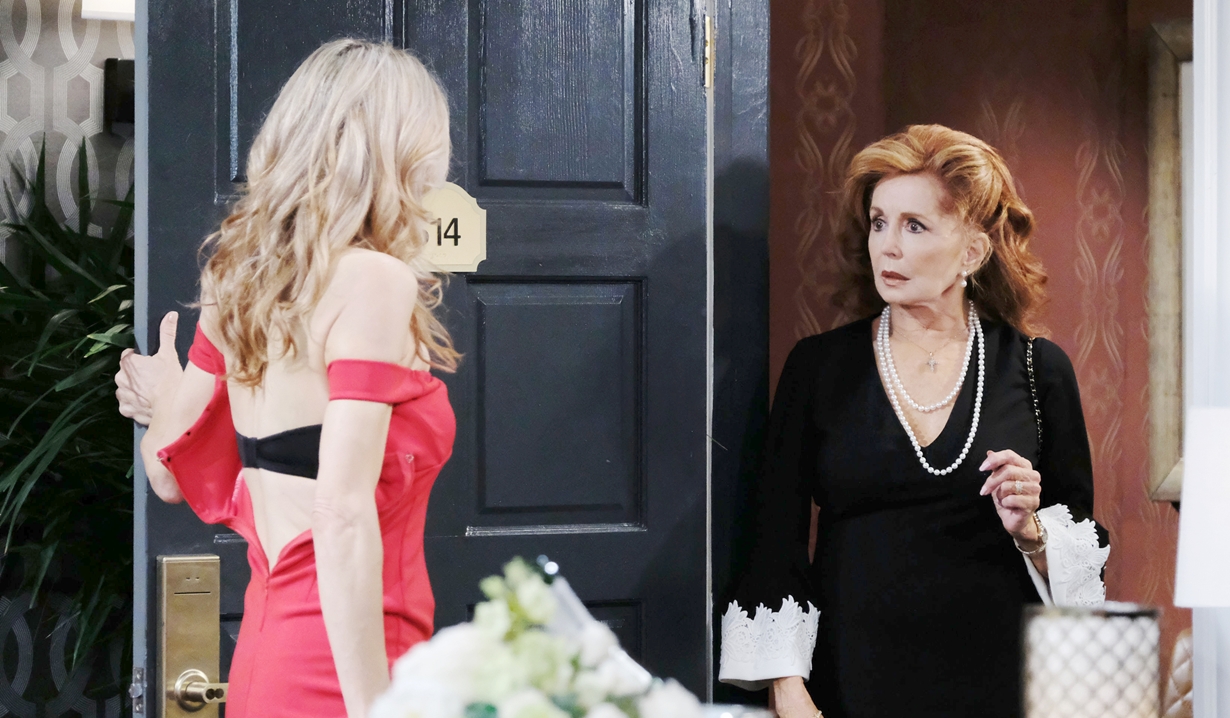 In their suite at Salem Inn, Kristen peels off her Nicole mask as Xander tells her she’s played the part beautifully. He remarks that he believed she was dead after the explosion. Kristen is her father’s daughter, and like the Phoenix, she rose from the ashes and will never die. Xander learns Kristen won’t reveal herself to anyone else. He peers at the mask quizzically as Kristen comments on the genius of Dr. Rolf. Being Nicole gives her the ‘in’ to get Brady, and Eric will have to accept it or she’ll take drastic measures. Talk turns to Holly being in a safe place and Xander changing the autopsy results. Xander questions Kristen pursuing Brady. Kristen snaps that he loves her and mocks Xander for wanting Sarah before realizing if Xander gets Sarah away from Rex, Eric will be distracted. She goes over their perfect plan, with Ted now being in Xander’s debt and in the position to force Hector to confess. Xander’s uncertain about Eric and hopes he doesn’t take matters into his own hands. He adds Kristen will have bigger problems if she gets Brady back – he knows the difference between her and Nicole. Kristen’s made modifications to her body including removing her Phoenix tattoo. Xander concedes Brady’s not too bright and vows to take over Titan – together they’ll rule this town. 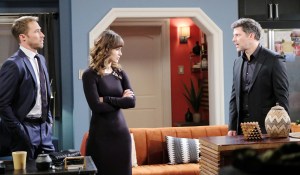 At Eric’s apartment, he, Rex, and Sarah puzzle over the death report on Holly. Eric’s concerned that Xander may have led Nicole to believe Holly’s still alive. Sarah wonders if Xander wants Nicole. Eric decides he should warn Nicole of his suspicions.

Kate joins Will at the square and is stunned to learn he doesn’t remember Tom and Alice. She asks, “Do you know who I am?” Will knows she’s his Grandma Kate and recalls Alice and Tom were his great-grandparents. He worries about forgetting everyone. Kate decides to take him to dinner.

At the Kiriakis mansion, Sonny finds Maggie holding a bottle of vodka in Brady’s room. Maggie claims it’s Brady’s, so Sonny assumes he’s fallen off the wagon. Maggie promises to take him to a meeting. Sonny exits and Maggie drinks. Elsewhere, Victor warns Brady to stay away from Nicole – she’ll ruin his life again. Brady believes she’ll forgive Eric in time. He reflects on his past ways of dealing with relationships as Victor mutters about Maggie sleeping in another bed. Brady flashes to finding Maggie drunk and asks Vic to take it easy on her. He warns Victor’s playing with fire with Kate and not to take his marriage for granted. After, Sonny finds Brady and expresses concern – Maggie told him he had a slip. Brady says he nearly did but didn’t drink. Upstairs, Maggie calls for the car to be brought to the rear entrance. She’s gone when Brady gets to the room.

At the SPD, Hope and Ted run into each other carrying boxes. He suggests they celebrate over dinner. Hope shrugs. “Why not?” 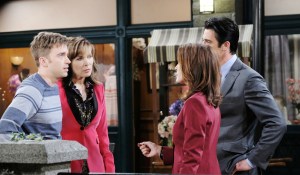 In the square, Ted and Hope are chatting when Will approaches to ask if they’re on a date. He freaks out at Hope for dating the guy who blackmailed him. Kate intervenes as Will apologizes. Kate adds every word was true. Later, Ted worries Hope’s having second thoughts, but she notes he’s put his old ways behind him. They toast.

At Eric’s place, Rex takes a call from Kate who is concerned about Will and rushes out to get Dr. Rolf’s paperwork. When Eric decides to get air, Sarah realizes he’ll never give up on Nicole. She tearfully wishes him the best. Later, Rex returns with Rolf’s research and Sarah helps go through it. The face mask technology lies on the desk.

In her suite at Salem Inn, Kate hears pounding on her door – it’s Maggie. She staggers angrily into the room as Kate observes she’s drunk as a skunk. Maggie blames Kate, who thinks this is really 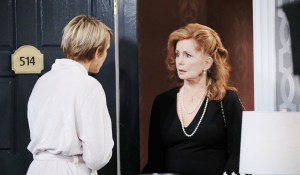 about knowing she could have saved Holly’s life by insisting Chloe move in. She advises Maggie hash this out with Nicole – the only person who can give her absolution. In their suite, Xander helps Kristen off with her dress. She then tells him to get the hell out. He leaves and Maggie knocks. Kristen rips the door open thinking it’s Xander. Maggie’s eyes pop. Kristen slams the door, dons her Nicole mask, then reopens the door. Maggie insists she saw Kristen, but Nicole calls her a lush and snaps, “Go home and sleep it off.”

Will joins Sonny at home – he’s scared. Sonny holds him. He vows they’ll find a drug to cure him.

Outside Brady’s Pub, Eric warns Xander to stay away from Nicole. Xander warns if Eric’s on his way to see her, that’s the last thing she needs.

Days of our Lives Pre-empted...