Maggie Falls off the Wagon, After a Fight With Victor

Thursday May 23, 2019: On Days of our Lives today, Sarah finds Nicole's behavior strange, it's Holly's funeral day and everyone is morose, while Doug and Julie celebrate 25 years of marriage. 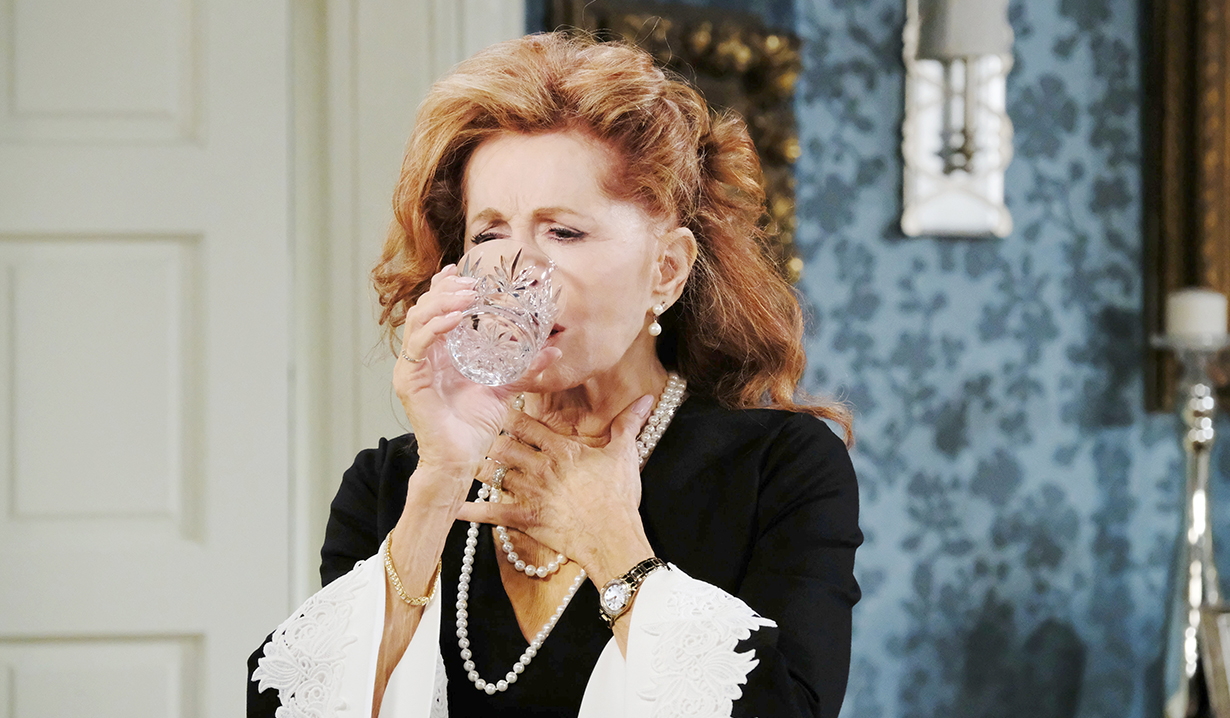 Chloe arrives at Brady’s looking for Maggie. They talk about Nicole’s grief. Chloe tears up and tells him that Nicole ripped her a new one again. In the living room, Maggie learns Victor ran an errand before the funeral. It gets the waterworks going and her gaze lands on the booze cart. She licks her lips surreptitiously. Chloe appears with a necklace Maggie gave Holly. Nicole didn’t want Holly to be buried with it. Maggie cries some more. She opens up about troubles with Kate being near Vic.

Kate meets Victor at the square to spill about seeing Xander and Nicole “chummy” together at Salem Inn. Victor knows Nicole hates Xander. Something fishy is going on and Vic plans on getting to the bottom of it.

Xander arrives at Nicole’s door at the Salem Inn. She’s wearing a sexy 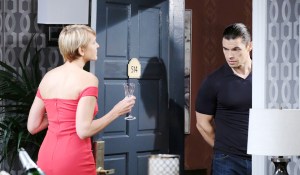 little red number and drinking a mimosa. He thinks she’s lost her mind when she tells him it’s her funeral dress. She complains about his patchouli scent. Brady knocks and Xander hides. Nicole dons a dressing gown and answers the door. Brady asks her to let Eric attend the funeral. She cries some and agrees to it, but will never forgive her ex. Brady notes that there’s a strange scent in the air. Nicole shrugs it off. He goes and Xander pops out. He rants that women usually like his scent. She says they’ve bigger problems. He has to break into the hospital and change the records so nobody suspects Holly’s not dead. 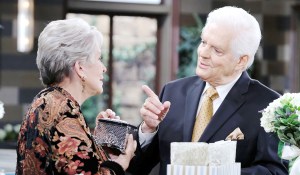 and feel saddened about Holly’s funeral. Julie finds a present and questions her husband. He wants to celebrate their 25 years of marriage. They share a loving kiss. Julie loves the jewelry box he gives her and she thanks him for the music, romance, passion, and a thousand days of love. They get romantic and begin to dance.

Gabi wanderers into the DiMera mansion and helps Stefan with his tie. He tells her to can it. He’s committed to Chloe. Gabi scoffs. This isn’t about sex. She offers to bring Ari over to hang out with Parker to give Chloe a break. Stefan comments that it’s almost as if she has a heart.

Back at Eric’s, he holds back tears as Brady calls with the news that he can go to the funeral. Rex is paged. He can’t attend the funeral. He takes off to the hospital.

At the square, Gabi congratulates Kate for her new job at Titan. Kate finds it funny that Gabi still has revenge on the mind. Gabi apologizes for blackmailing Kate. She regrets it. Kate’s over it. Gabi asks to be friends again. Kate says not to make her regret this. They chat about Gabi’s scheme. Kate warns that she could fall for Stefan. Gabi denies that’ll happen but needs Chloe out of the way – today. Kate agrees to help.

At Doug’s Place, Eric tries to give Nicole his condolences but Nicole snipes at him. Sarah defends him and Nicole kicks them out. Brady and Victor walk up and Victor 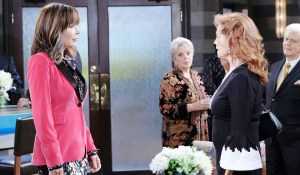 questions why she and Xander were chummy last night. Outside, Stefan takes a call from Gabi who says she’s at his place and Parker’s having a hard time. She didn’t want to bother Chloe. Stefan’s on his way. Chloe appears and he lies that he has business and will return soon. Inside, Nicole makes up a lie about why she shook hands with Xander, who really wanted a kiss. Victor doesn’t buy it. She asks how he saw her. He says Kate told him. Maggie pokes her head in and gripes that Kate was his errand. Nicole has a fit and takes off with Brady. Maggie yells at Victor about ignoring her when she needed him. Kate arrives and tells her their meeting was innocent. Maggie doesn’t believe it and takes off. Kate goes to Chloe to tell her that she heard Parker was really upset. Kate suggests she go check on him.

Xander finds Holly’s file at the hospital just lying out in the open. “Jackpot,” 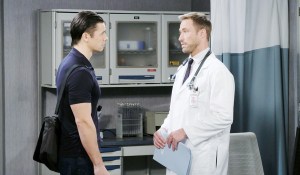 he says. He changes the document and hides the file as Rex walks in. He recognizes Xander as “the bastard who slept with my fiancee.” Rex apologizes for hitting on Sarah. Rex sees the file and question why he has it.

Stefan arrives at home and finds Gabi in a negligee in his room. She claims Parker spilled on her. He tries to avert his gaze and she tells him she talked Parker down and then suggests one last romp. He turns her down but then can’t stop himself. They jump in bed kissing.

Back at Eric’s, Eric cries to Sarah over Nicole lashing out at him. Sarah thinks Nic needs time. Eric starts kissing Sarah.

At Salem Inn, Brady tries to console Nicole. She winds up kissing him.

Maggie arrives home and can’t fight the lure anymore. Her hand shakes as she takes a drink.

A huge secret is revealed.