Friday May 17, 2019: On Days of our Lives today, Jennifer attempts to stop Melinda from murdering Jack and Eve, Kate learns about Xander's role in the company, and Xander agrees to divorce Nicole. 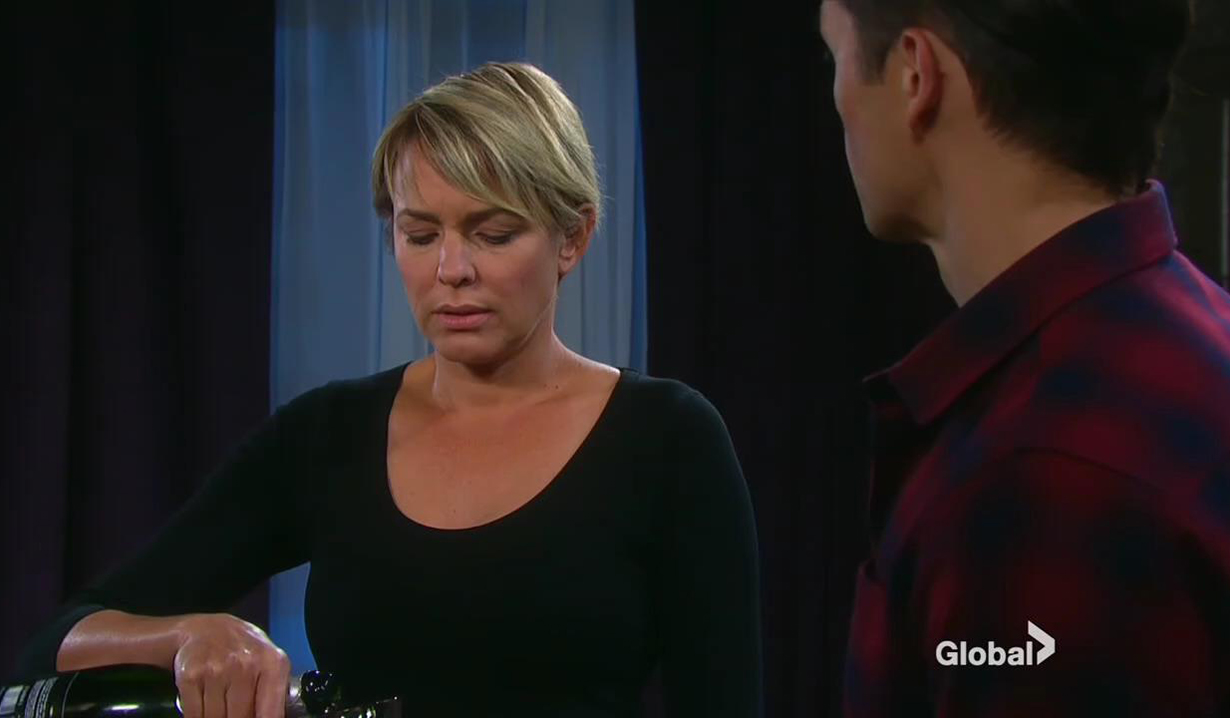 Kate waltzes into the Kiriakis mansion annoyed that he hired Xander. Victor wouldn’t hire Xander to take out the garbage. Kate’s puzzled until Brady walks in and admits he hired Xander. Vic asks Brady why he asked “that blood-sucking leech” to work for Titan. Kate leaves the room as Brady explains that it’s an executive position and Xander agreed to give him Nicole’s confession. Besides, Victor gave him the CEO position with the stipulation that he wouldn’t get involved in his decisions. Brady goes.

More: Shawn Christian in Love in the Sun on Hallmark

Xander approaches Sarah at the pub. She tells him he stinks and to get lost so he ignores that and sits with her and flirts. She reminds him she’s engaged. He shrugs. He’s married. So what? He continues to flirt until Eric jumps him and punches him out. Meanwhile, outside, JJ and Haley run past. Inside, Xander gets up and says as much as he’d like to wipe the floor with Eric, he has a business meeting to attend to. He goes. Sarah tells Eric she brought this on herself.

At the DiMera mansion, Nicole stares at Stefano’s portrait. Stefan comes upon her. 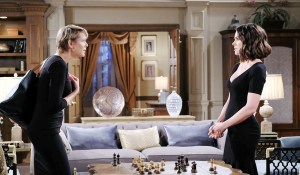 He asks how well she knew his father. She tells him they had a complicated relationship. She assumes he cared for Holly. He says she brought joy to everyone. He’s glad she’s there. She and Chloe need each other right now. Chloe appears and apologizes to Nicole. Nic says she saw the dress Chloe sent for Holly to be buried in. Does Chloe think that’ll make up for getting her daughter murdered? Chloe cries that she loved Holly and did everything she could to protect her. Nic throws the dress at Chloe and takes off. Stefan holds Chloe while she cries.

Jennifer is shocked to find Melinda with a gun at the park. Melinda 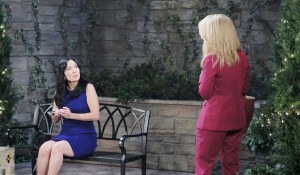 tells her that she’s going to make Jack and Eve pay for what they did to Haley. Jennifer tries to talk her down. Melinda blurts that Haley’s her daughter and she wants Jack and Eve dead. Jenn talks her into putting her gun away and compassionately listens as Melinda says she was 17 when she got pregnant. She was taught to strive for perfection with shame. She goes on to tell Jenn the rest of the story about birthing Haley. Melinda’s shame made her shut down her feelings. She feels she has nothing left to lose and takes the gun out again. Jenn begs her not to do this but for once, Melinda wants to stand up for her daughter the way Jenn stands up for her kids. Jenn says she’ll get revenge but Haley will still be deported. Jack and Eve aren’t the ones who hurt Haley the most. Melinda has. Jenn asks her to move forward and stop being cold and distant toward her kid. Jenn assumes this whole business has hardened her heart. Jenn asks for the gun. Melinda hands it over and thanks Jenn who suggests she find Haley and become her lawyer and then gets a text from the office. She tells Melinda that JJ and Haley are on the run.

In some hotel room, Haley and JJ watch the news and then Haley tries to grasp the changes in her life, especially knowing her sister is her mother. She tells JJ some stories about how Melinda knit her a baby blanket which was important to her. Haley has so many questions. Why didn’t Mel want to be her mom? JJ tries to console her.

At the square, Brady gives Xander the contract for working at Titan. Brady wants him to hand over the recording and divorce Nicole. Nic strolls up as Xander refuses to let go of her. Xander apologizes to Nicole and hands the recording over and signs the document. He leaves and Nicole takes the recording. She wants to destroy it herself. She hugs him. Eric and Sarah wander up as she tells Brady he’s the only one she can count on. Eric asks to talk to her but she’s done with him and can see he was too busy with his girlfriend. Sarah denies that’s true. Nicole leaves and Sarah takes off, leaving Brady to suggest Eric give Nicole time to come around.

When Kate returns to the Kiriakis living room, Victor explains why they’re “stuck with this worthless maggot.” Xander strides in and assumes he’s the topic of discussion. He plans on proving to Victor that he could be a better CEO than Brady could have dreamed. He leaves and Victor asks Kate, “Would you be so kind as to fetch me my gun?”

Xander goes to Nicole’s room at Salem Inn. He pops the cork on champagne and Nic celebrates the fact that her plan went off without a hitch. Xander grins and says she couldn’t have done any of this without him. “Partner.”

Will Blames Marlena for His Tumor...