Will’s Tumor May Be Caused by Rolf’s Serum, Which Will Finds Ironic

Tuesday May 14, 2019: On Days of our Lives today, Will gets word from Kayla that his tumor is resistant to treatment because of Rolf's serum, Stefan rejects a surprised Gabi, and Sarah attempts to talk Nicole into forgiving Eric. 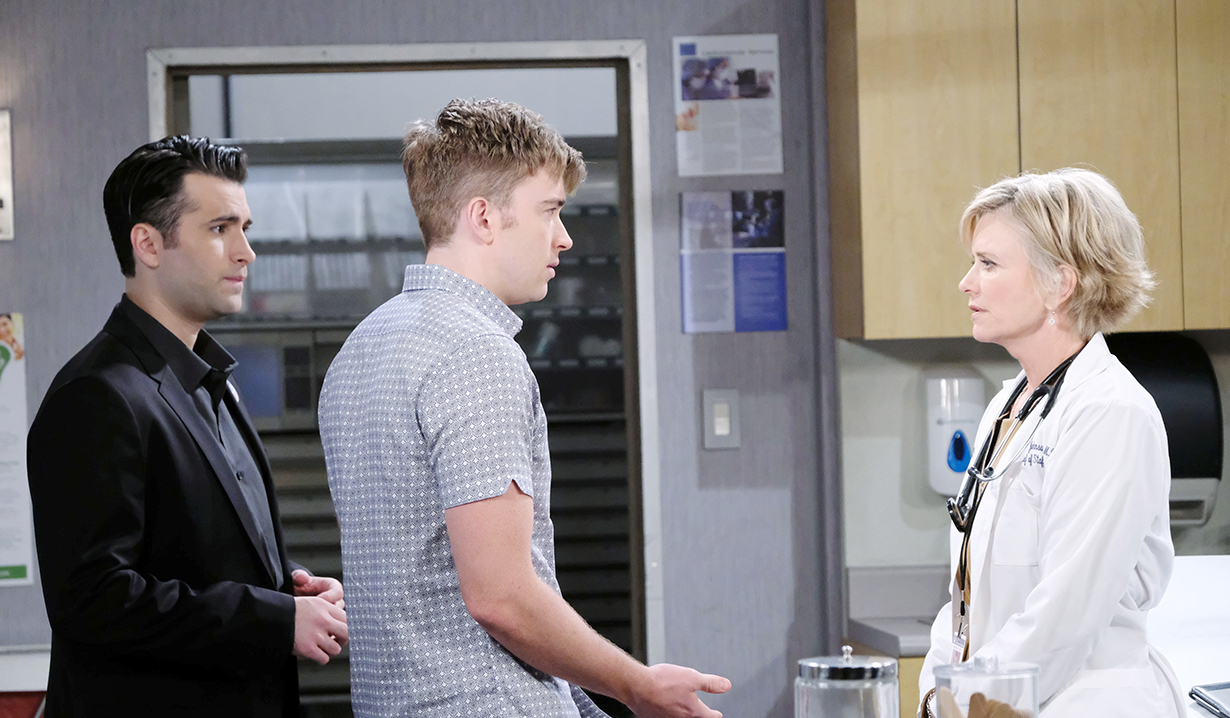 At the Kiriakis mansion, Xander agrees to hand over Nicole’s confession recording if Brady 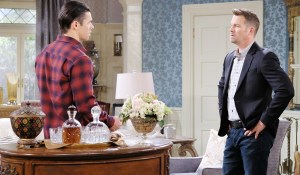 makes him CEO of Titan. Brady says even if he wanted to, he doesn’t appoint his successor. Victor does. Xander warns that if he can’t make it happen, Nicole’s going to prison. Brady offers to buy the recording so he can establish his own company. Xander doesn’t want that. He wants respect so Brady offers him a good executive position that’ll give him power. Xander doesn’t want to be Brady’s junior but Brady counters that it’s a good way to prove himself.

Sarah drops by Nicole’s at Salem Inn after hearing Nic and Eric had a fight. She asks if 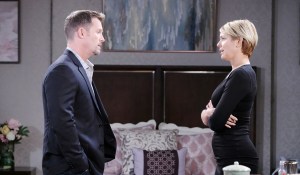 Nicole is okay. Nicole talks about the pain of losing two babies and now Holly. She curses herself for not going straight to Holly. Sarah provides solace but it’s not enough. Nicole accuses her of not protecting her daughter. Sarah tries to plead his case and begs Nic not to push them away. Nicole asks when she and Eric became close. Sarah stammers as she explains they’re good friends. “Did you bond over my death?” Nicole asks. Is there something going on between them? Sarah lies that there isn’t. Nicole hopes she’s not settling for Rex because if she wants Eric, she can have him. Sarah lies that she doesn’t want Eric. Nicole gives her the boot and Brady appears with news that Xander won’t hurt her again. They embrace.

Despondent Eric lets Marlena into his apartment. She cries with him, sorry about Holly. 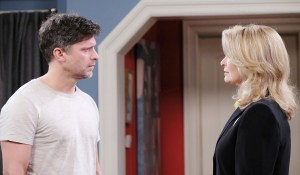 They discuss Nicole attacking Eric and blaming him for Holly’s death. Marlena knows it’ll take time for Nic to come around but Eric agrees with Nicole. He is to blame. Marlena attempts to make him see otherwise and then apologizes for accidentally telling Sarah that he had feelings for her. Eric doesn’t want to get into it right now but Marlena thinks they’ll have to at some point. He still has feelings for her and Nicole’s pushing him away. Eric asks if she’s asking him to let go of Nicole. Marlena just thinks he should be honest about his feelings – as should Sarah. Marlena recalls being in the same position when Roman came back and she tried to push her feelings for John away.

At the DiMera’s, Chloe finishes a call from the funeral home. They need a dress to bury her in. 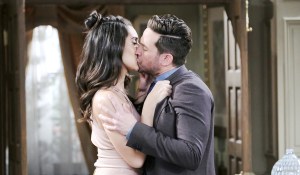 Chloe sobs and Stefan holds her as Gabi walks in. Gabi apologizes for the interruption. She and Stefan have unfinished business. Chloe takes her leave and Gabi gives Stefan a kiss. He backs off, which sets Gabi off. She taunts him a little then thinks he needs comfort. They kiss until he finds Holly’s bunny stuffed animal under the cushion. He can’t do this. “Not now or ever again.” Gabi comforts Stefan. She can’t imagine what Chloe’s going through and notes that he was attached to Holly. Stefan says she filled a void Charlotte left. Gabi rubs his leg and offers to comfort him after the funeral. That sets off Stefan’s suspicions. He asks what she’s up to but she claims she’s up to nothing. Stefan kicks her out. He leaves and she babbles to Stefano’s portrait that his son will not dismiss her after everything he has done to her.

More: Find out what soaps are on Memorial Day

At the hospital, Sonny informs Rex that Holly’s accident was wiped out from Will’s memory. Will says little by little, he started to remember it again. Rex says that’s typical of this tumor and radiation. Will panics. He couldn’t handle losing his memory again. Rex doesn’t think that’ll happen. He goes and Kayla walks in. She explains that the pathologist couldn’t classify the sub-type tumor since he’d never seen it before. It’s unique because the tissues contain traces of a rare chemical compound – Rolf’s serum. They can’t say definitively if the serum caused the tumor or not but it’s possible that the tumor will be resistant to treatment. Will and Sonny are staggered and find it ironic since he took the drug to regain his memory. Kayla wants to get a hold of the chemical compound so she can try to resynthesize it in order to create a treatment. Sonny and Kayla agree Will needs to fight.

Sarah goes to Eric’s to confess she went to see Nicole and made things worse.