Thursday May 9, 2019: On Days of our Lives today, JJ and Haley spend time together, Will gets bad news, Claire hands Eve the damaging audio against Haley and Tripp, and Jack's upset when Kayla refuses to help him. 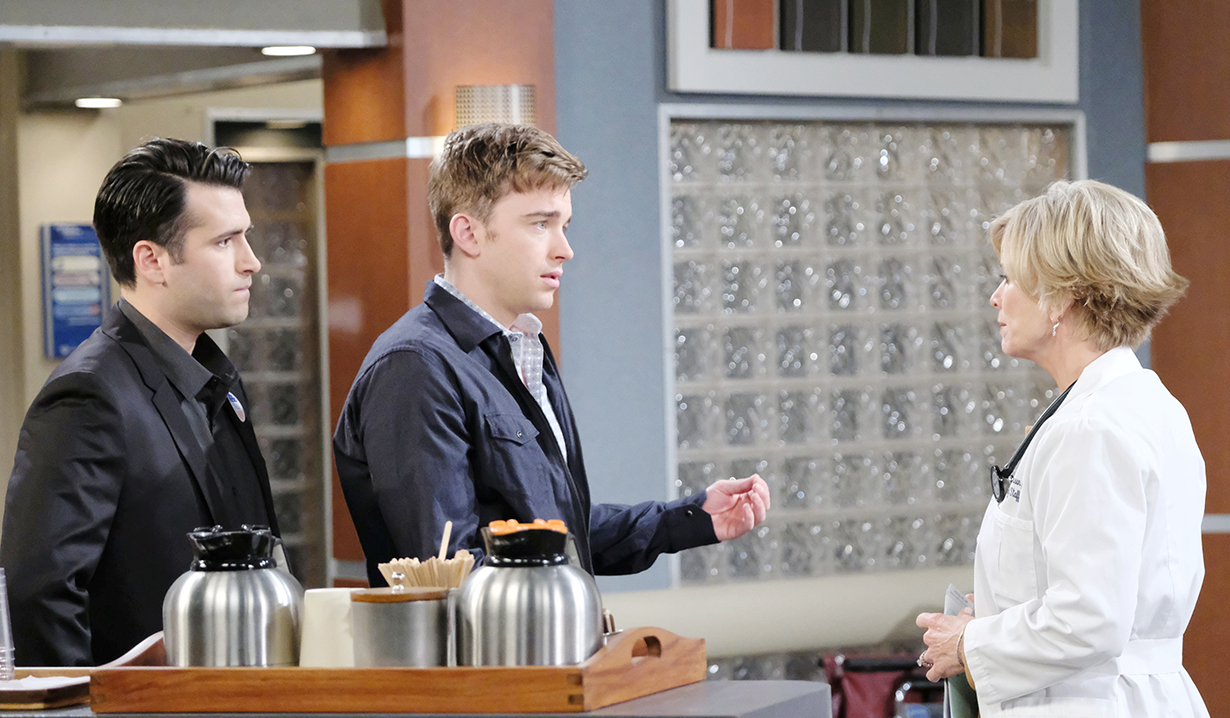 At the loft, Haley tells Tripp she can’t find their wedding photo. She wants to place it in a frame in case Agent Smith drops by.

Will and Sonny almost catch Claire burning Haley’s picture in the fireplace at the Kiriakis mansion. She snaps at them for spying, then quickly apologizes. They’re off to University to see if the tumor has shrunk. Claire’s praying for him. They go and Tripp appears with donuts from the pub for Maggie. He heard the news about Holly. He shows her his half of the wedding photo. She lies at first about tearing it up but then admits she went off the deep end for a moment. Claire reveals that she dislikes Haley. Tripp suggests therapy. Claire thinks he’s calling her crazy but he’s afraid of her anger. He breaks up with her and goes. Claire vows she won’t give him up “to a little bitch like Haley.”

At the pub, Abe and Lani puzzle over why Rafe was suspended. Abe’s angry that Rafe left Lani alone with David all night. Eli appears and complains about Abe hitting on Sheila and breaking his mama’s heart. Lani interjects. That’s not what happened. Abe concurs. Eli says Abe has lost his vote. Abe explains and admits Sheila resigned and left town. He’s hurt that she was forced into it and hates that Eli thinks he treated Sheila badly. Eli apologizes. “You’ve still got my vote.”

JJ turns up at the square for election day to vote. Eve’s angry that he told all of Salem about something private between Jack and Kayla and didn’t give them a warning. JJ retorts that he’s sickened that his father would ruin a young girl’s life just to become mayor of Salem. He takes off.

At the hospital, Jack goes to Kayla. He asks Kayla to put out a statement that they worked through the rape and that it’s in the past. He took the liberty to draw something up. She’s not happy he’s only trying to salvage things 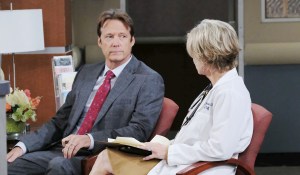 for himself on election day. Jack thinks the voters will forgive him. Kayla reads it. He calls the rape a regrettable incident and an unfortunate episode. “It sounds like you backed your car into a tree.” Kay’s disgusted. It also sounds like she’s endorsing him. She calls it garbage and shreds it before stomping off just as JJ walks up, having overheard the outburst. JJ questions him. Jack says people make mistakes and deserve second chances. JJ says everyone but Haley apparently. He calls his father “one cold son-of-a-bitch.” Nearby, Haley gives Will forms and he goes for his scan. She and Kayla talk about Tripp wanting to be with Claire. In another room, Haley and JJ talk about his rape announcement. He feels awful. Haley confesses she misses JJ. They flirt and kiss. By the hub, Will is happy that Sonny’s been there for him. Kayla interrupts. His scan came back and his tumor didn’t shrink. She’ll discuss more treatment with Rex and asks him not to lose hope. Will worries since it makes him act weird sometimes. Sonny jokes that him acting weird is part of his charm. They laugh and embrace. Later, Kayla looks at Will’s scan and wonders how she could have missed it.

Eve arrives at the Salem Inn. Jack mopes. Many people won’t shake his hand down at the square and Kayla refused to sign his statement. Eve felt it was worth a try. Claire appears with proof that Tripp and Haley’s marriage is a sham. She plays the recording from a few days back. They decide what to do with it.

Tripp finds Claire at the park. He apologizes for things he said.

Eve arrives at the hospital and almost sees JJ kissing Haley. She taunts them and 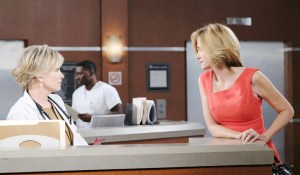 then plays the tape.

Back at home, Sonny brings up Holly’s accident and Will’s confused. He had no idea…

At the square, Abe’s approached by a reporter, (played by William Charlton), who asks where Val is. Abe confesses they broke up. The reporter asks Jack if Eve was upset to learn about the rape. Jack calls it ancient history and says Eve’s very supportive.

Maggie Almost Falls off the Wagon As...

Haley Confesses Her Marriage Is a...