Tuesday May 7, 2019: On Days of our Lives today, John surprises Marlena, Maggie and Sarah argue about Rex, and Victor lets Kate in on a secret about Sarah. 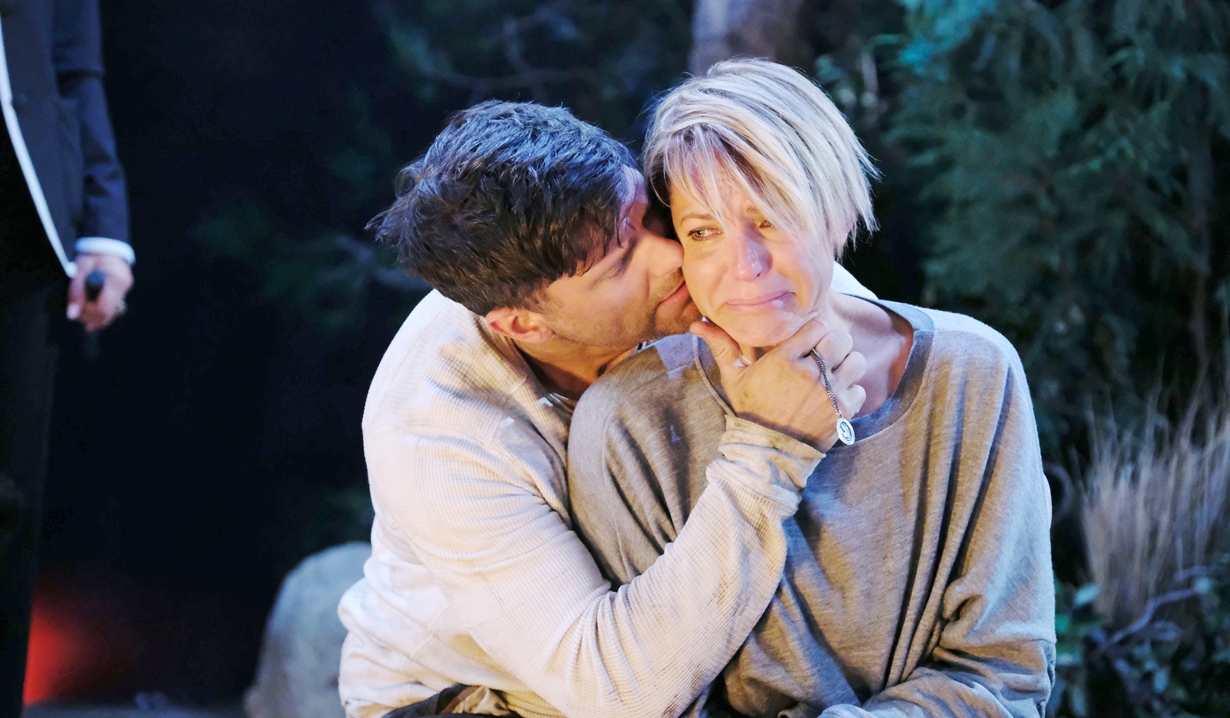 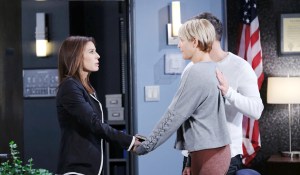 Eric is reassuring Nicole when Hope appears and gets a call from Rafe, who explains there’s been a terrible accident. Hope disconnects and tells Nicole she’s so sorry, but the kidnapper drove the car over the embankment. Hope says Rafe’s not sure anyone survived. They take off.

In the hotel room, Ted’s irked to be sent to voicemail but reports everything went according to plan. He never wanted to get mixed up with a kidnapping, but now wants the kid in his hands. He hisses, “Where the hell are you?”

On the roadside, Rafe is joined by Hope, Eric, and Nicole, and Eric goes into the ravine to search for Holly. Ted appears and follows. Soon, they smell gas. Rafe hollers, “Get out of there!” as an explosion occurs. The smoke clears and Rafe helps Eric up out of the ravine, then Ted. 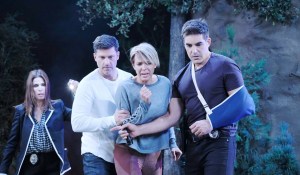 Nicole wails her daughter’s name as the flames crackle. Eric tells Nicole it was dark, but he thinks the car was empty. Nicole asks, “Where are they then?” Hope promises they’ll find them. Nicole sobs, “She can’t be gone.” Eric begs her to keep the faith. Later, Hope breaks the news to Nicole that they recovered two bodies – one was an adult and one was a child. Nicole breaks down in Eric’s arms.

John stops Marlena outside the Brady Pub. She wonders why it’s closed. John has the run of it for the night and surprises her with a romantic set up for the six-month anniversary of their most recent marriage. After dinner, they discuss Will’s tumor; Marlena’s cautiously optimistic. John produces a special dessert to share, 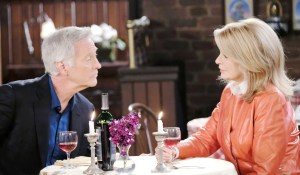 but Marlena’s worried about Holly…and Eric. She confides that Eric told her he was in love with Sarah, and she loves him too. John learns Eric struck a bargain with God and Marlena told Sarah about it. Sarah went to Eric, but Nicole returned and now she’s going to marry Rex. “We both know how that turns out,” Marlena says as she recalls her feelings for John couldn’t be ignored. Talk turns to whether Kristen could be alive. John believes if she were, they’d know. That’s what Marlena’s afraid of. The mood turns flirtatious again, they kiss, and take the party home.

At the Kiriakis mansion, Rex predicts Eric and Nicole will be walking down the aisle the minute Holly’s found. Sarah suggests they get married soon and Rex agrees. Maggie enters and complains about Rex pressuring Sarah to get married. Sarah corrects her and Maggie apologizes, then asks about Victor storming out. Sarah admits she defended Nicole to him. Rex goes to the kitchen and Sarah asks Maggie about her marriage. She confesses everything’s not okay – he hired Kate and she can’t let it go. They discuss Victor’s relationship with Philip. Sarah doesn’t understand her mother putting up with Victor. Maggie loves him…but questions if he still loves her – he’s not there and she needs him. Maggie feels Sarah’s marrying Rex because Nicole came back. Sarah flashes to Eric confessing his feelings, and their kiss. She cries but says she and Rex are fine. Maggie asks if Rex knows about her feeling for Eric. Sarah tells her to stop, but Maggie brings up Rex’s cheating. Sarah hushes her as Rex returns. He asks if there’s news yet. Maggie says there isn’t, and no news is no longer good news.

At Doug’s Place, Kate spots Victor, who’s there for the peace and quiet and grumbles about Nicole’s return from the dead and Sarah, who has him ordering doubles. Kate learns she had the nerve to take up for Nicole and they banter about Nicole and Kate both having tried to kill Victor. Kate thinks Sarah’s perfectly lovely, but Victor then reveals Sarah cheated on Rex…with Xander. Kate exclaims, “That little slut!” Victor sees she’s plotting. Kate admits she’ll have to be careful not to alienate Rex. Victor thinks Rex and Sarah will implode anyway. Talk turns to Philip. Kate complains Victor drove him away again. Victor wonders if he knows Kate’s back in the fold at Titan and admits it was part of why he hired her…he also wants the company back to where it was when she previously ran it. Kate’s all in and reassures Victor about Philip with a kiss on the cheek. Maggie appears and announces Holly is dead.

In the Kiriakis mansion, Sarah cries about what Nicole must be going through and thanks Rex for letting her lean on him. He says he’ll always be there.

At the crash site, Nicole wants to see as the bodies are brought out, but Hope protests, “Not like this.”

Ted returns to the room where Xander shows up and says Holly is fine and sleeping peacefully on the way to her new family.

Ciara and Ben have upsetting news for Chloe and Stefan.

Victor Threatens to Call the Police...

Maggie Almost Falls off the Wagon As...