JJ Reveals Jack Forced Himself on Someone to the Salem Media

Thursday May 2, 2019: On Days of our Lives today, Val's hurt upon hearing news that Sheila and Abe kissed, Haley asks for her job back at the hospital, and Eli's upset that Lani's getting closer to David. 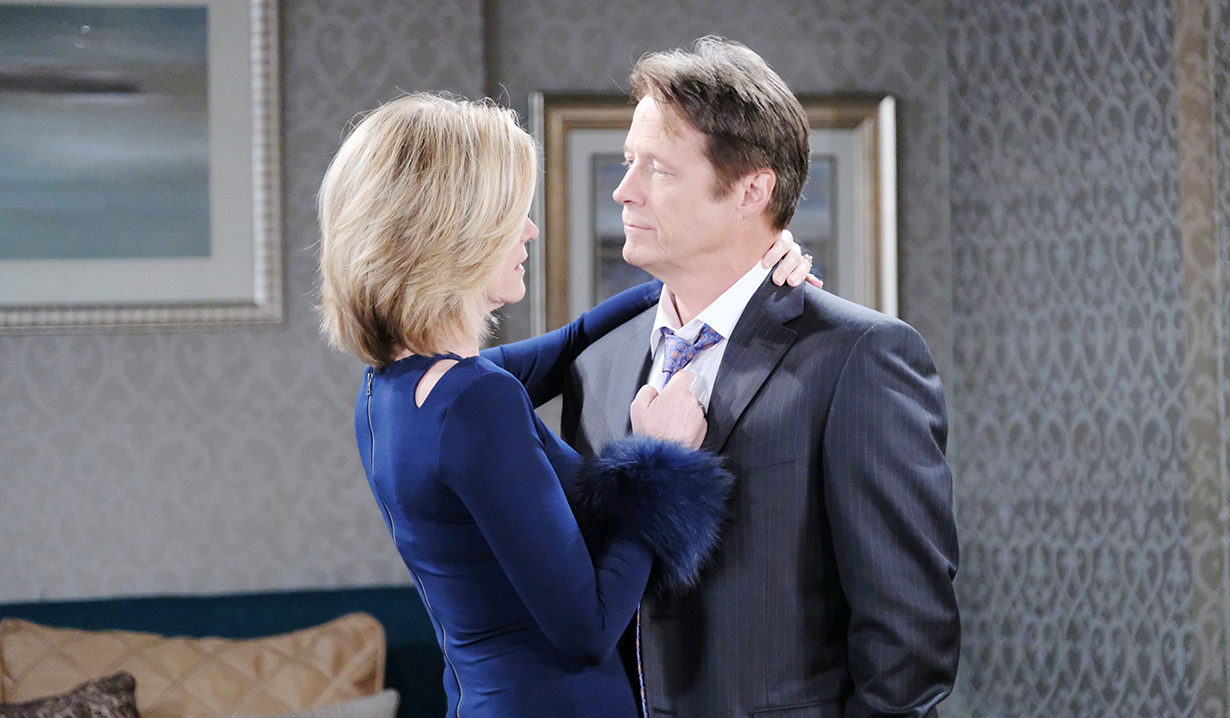 At the mayoral debate at the square, Abe yells that Jack’s allegations are baseless. He’s not having an affair with Sheila. Val defends Abe and Jack grins as Eve reveals the photo of  Sheila kissing Abe. Everyone gasps. Sheila calls it a fake but Eve goes on about how dishonorable Abe is. Abe reluctantly admits the photo is real and Sheila tells Val she can explain it. Val takes off as the press hounds Abe. He races after her and JJ glares at Jack while Sheila says there’s nothing between them. Just that one kiss and she initiated it. Abe made it clear that he was taken. Eve and Jack yell over her words, asking if Abe forced himself on her so JJ gets in his face and snaps. He hollers, “The only man here who forced himself on a woman is you!” Jack gasps and the journalists start snapping photos and begging for crumbs. Eve does damage control and lies that JJ was making it up.

At the hospital, Haley asks Kayla for her job back. Kayla says she’s looking forward to working with Haley again. She asks how married life is and Haley tells her mother-in-law how grateful to Tripp she is. Kay asks how Claire’s dealing with it and Haley’s close-mouthed. Kayla assumes it’s bad. Haley can’t blame her for being upset especially now that she has to move. She laments that Claire has made so many sacrifices for her. Later, JJ finds Haley. He heard she wasn’t being deported and is happy for her. He spots Kayla and takes her somewhere private before confessing about what went down at the debate. Kayla tells 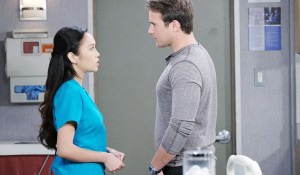 him not to worry. It’s amazing he didn’t burst out about it before. Later, a journalist shows up and asks Kayla if she can confirm that her husband Jack Deveraux raped her in the 80s. She admits it’s true. In another room, Haley tells JJ about being stuck married to Tripp longer than she thought.

At the loft, Claire’s about to torch Haley’s photo when Tripp catches her. She hides the photo and he asks if she’s smoking again since she’s holding her lighter. She denies that. JJ returned it to her since forensics couldn’t trace it to the cabin fire. Claire starts stuffing her things in boxes angrily until Tripp reminds her he’s still committed to her. She can’t stand three years of sneaking around. Tripp tries to calm her but it appears to her as if he’s getting rid of her permanently. He kisses her. She responds and they go into her bedroom. After sex, Tripp offers to move out with Haley but Claire decides to go to Pop Pops since he has the room. Tripp hugs her. This is why he loves her and calls her stronger than she thinks. Once she’s gone, he 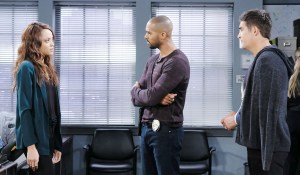 finds the photo she cut up.

At SPD, Rafe’s as surprised as Eli is to learn Lani’s taking a leave of absence at work to care for David. Rafe muses that it’s not necessary but Lani doesn’t listen. She offers to instead use her bank of unused vacation days. Eli has no time to argue when something comes up. He leaves and Rafe returns. He doesn’t want David to come between her and Eli.

Abe finds Val in the park and explains that he grew to see Sheila has a generous heart. Val thinks he fell in love. Abe says no. It was more like loneliness and curiosity but they both felt nothing. It was a mistake. Val’s still pissed. Abe regrets his actions but thinks it happened because of their long-distance relationship. He’s sorry but it’s not working for him. 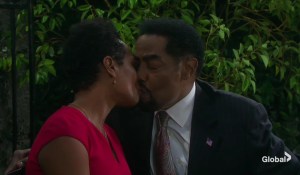 Crying, Val admits the same. They love each other but decide to break up. They kiss goodbye and Val leaves as Sheila pokes her head in. Abe fills her in on the end of their relationship. Sheila’s sorry and blames herself for that and for him likely not being made mayor. She resigns. “Like hell, you will,” says Abe. Sheila flashes back to some of the funnier times with Abe such as when she tried to swipe his credit card, the time she barfed on his shoes, and when he found her car with the license plate TLC 4EVA in his parking spot. They chat about those times and laugh. Sheila thinks the town needs his decency. If she goes, he’ll have a fighting chance. They hug goodbye, knowing there’s a chance someone watching could make something of it. Sheila leaves.

Back at Salem Inn, Eve gloats but all Jack can think about is the rape.

Outside the park, Eli finds Val. She reveals she’s leaving town again and tells him why.

At the Kiriakis mansion, Claire gets out Haley’s photo and sneers.

Jack Shows a Photo of Abe and Sheila...

Xander Refuses to Return Holly to...