Monday April 29, 2019: On Days of our Lives today, Nicole and Eric share a happy reunion, Hope takes over the kidnapping case, Abe and Sheila kiss, and the kidnapper is revealed. 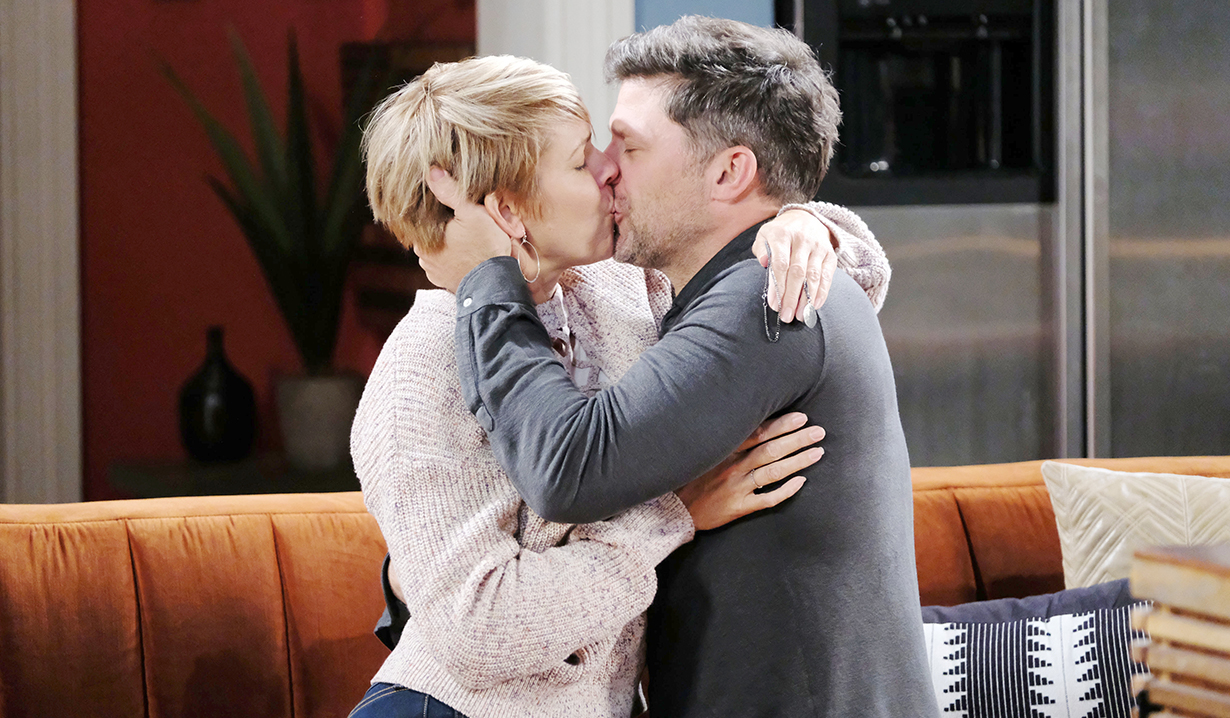 Eric and Sarah stumble upon Rex with Nicole at the apartment. Eric approaches Nicole in disbelief. She confirms that it’s really her and they embrace, blissfully. Eric inquires as to how she can be alive. They kiss and Sarah and Rex tear up, both for different reasons. Eric again asks for answers. Nicole will explain it to him and Holly. Sarah flashes to kissing Eric moments earlier and hearing him sharing his feelings for her. She suggests she and Rex give Ericole time alone. Eric doesn’t know what to say. Sarah forces a smile and lies that it’s okay as Rex seems puzzled. Nicole is surprised to see Sarah and asks after Maggie. Sarah’s sure her 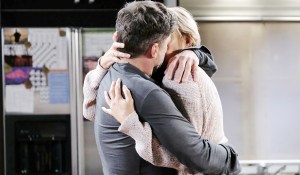 mother will be overjoyed to see Nicole. She and Rex take off. Again, Eric questions how Nicole escaped the explosion. He hands her the necklace that the rescuers found. Nicole has no idea how she survived. She vaguely remembered someone coming toward her and then assumes she passed out. When she came to she was in ICU and in bad shape. Eric sobs. If he had of known, he’d be by her side. Nic says it took forever to get back on her feet and once she was, she hurried back to him and Holly. She’ll never leave him again. They make out. She stops things, worried that he won’t want to see her naked. She was severely burned. Eric finds her beautiful but he can wait forever. He flashes to kissing Sarah and when Nicole asks what’s up, he lies. They eat and snuggle.

More: Details on how to watch the Daytime Emmys

At the DiMera mansion, Chloe cries that Holly is gone and Parker hasn’t seen her. Stefan calls Ben who tells him the security system hasn’t been tripped. They’re searching the grounds. Later, Stefan yells at Ben on the phone because he hasn’t found Holly. Chloe shrieks at Stefan to call the cops.

At the pub, Eli fills Abe in about his daughter staying with Rafe to help care for David. Eli’s concerned that Lani’s becoming too attached to the baby and thinks it’ll be difficult to let him go when the time comes. He gets a text about the kidnapping and runs off.

Rafe brings Lani chowder from the pub. He grumpily lets her know he found Hope and Ted together. 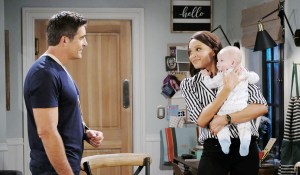 Lani’s sorry they’re going through this. She knows Hope’s been through a lot with Ciara. Maybe her judgment is off. Rafe says it happened before with Aiden Jennings. Lani discusses her feelings for David and admits it’s helping her heal. Later, she feeds the kid as Rafe reminisces about helping to raise Sydney and baby Grace and they bond over growing up without a dad.

At Doug’s Place, Hope’s close to tears as Ted apologizes for causing more trouble for her and Rafe. He’ll take the necklace back tomorrow. She asks him to stay with her. She’d be lying if she said she didn’t have feelings for him but she’s married and giving up. Stefan calls and Hope has to run. Holly’s been taken. Once she’s gone, Ted calls someone to tell them the mission was accomplished.

The masked kidnapper takes Holly into a mysterious location.

Abe walks up to Sheila at the square. They discuss the ever-dropping polls and she hears about Holly going missing and thinks Jack Deveraux will be all over this. The topic is turned to their ‘almost’ kiss and Abe muses that it’d be inappropriate 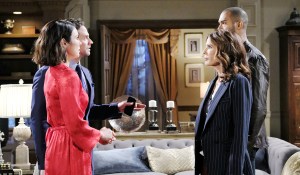 for him to kiss her. Sheila blurts that she did try to kiss him but he’s not her type. Abe likes her spirit. He admits there’ve been times…Sheila thinks it’s time to find out if their feelings do mean anything. She plants a kiss on him and they both confess it was like “kissing your sister.”

At the Kiriakis mansion, Rex and Sarah wonder how Nicole came back from the dead. Sarah tries to hide feeling dejected but Rex senses something’s amiss and questions her. She deflects and they dine.

More: Days column on disappointment with the show

Hope and Eli arrive at the Kiriakis mansion. Chloe says there’s no ransom letter and Ben’s combing the grounds. Hope demands he calls off his guards so that they can do their job. Hope goes to see Ramon in case he’s involved in this. Hope returns. Ramon swears he has nothing to do with this.

Ted goes into a hotel room filled with toys – and Xander!

Nicole has a fit.

Ciara and Ben Make Love While...