Friday April 26, 2019: On Days of our Lives today, Holly's kidnapped, Rex notes that Nicole's dehydrated, Sarah and Eric share a kiss, and Rafe walks out on Hope again, as Eli and Lani argue.

At Ben’s cabin, Ciara climbs on top of Ben as they kiss. He stops to turn off his phone so they’re not interrupted. She smiles. She already turned hers off. Generic music plays as the clothes start coming off as they make love. Later, they snuggle and Ben talks about not being crazy anymore and how Ciara makes him happy. Ciara never thought she’d fall in love or have anyone love her back. They profess their love and eat fortune cookies. At the main house, Chloe wants to check on the kids but Stefan points out that they have the baby monitor. 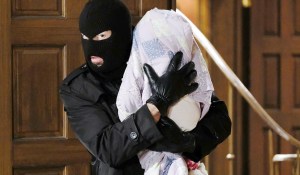 Meanwhile, the masked man walks into Holly’s room and soon, Holly starts to cry. Chloe rushes upstairs as the man hides in the closet. She goes back down to the lounge with Stefan and he compliments her as they head into the kitchen to dine. The masked man appears with Holly and takes her into the tunnels. Later, Chloe and Stefan make out and drink wine in the lounge until Chloe pulls away. She’s not ready for more. She heads upstairs and screams Holly’s name. Stefan goes running after her. Back at Ben’s, he turns his phone back on at Ciara’s insistence.

Rafe calls to ask Lani to stay at his place and care for David a while longer. He’ll pick up some steak and bring them home. They disconnect and Eli appears at the door. He’s been waiting for her. She’s sorry but she just put the baby down. Eli is concerned. Rafe can hire a babysitter. Eli realizes she’s spent the night there. He doesn’t like it. He wants to spend time with her so she invites him to stay. He only wants to be with her. Eli is concerned she’s getting too attached. He’s not her baby. No amount of wishing will bring David back. Lani knows. David cries and she tells Eli to leave.

At Doug’s Place, Ted asks Hope to take the necklace, with his love. 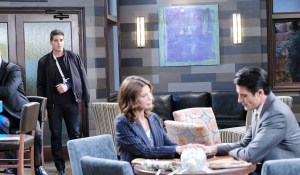 Hope puts her hand over his and tells him they’re not ever going to happen, just as Rafe walks in and takes in the display. Angry, he confronts Ted. Hope drags him away and he orders her to explain. Hope tells him that she talked to Ted and the necklace was what that phone call was about Eli overheard. Rafe gets louder and makes a scene. Rafe starts to cry and takes off. Hope looks lost.

At the pub, Sarah tells Eric she knows he lied to her about his feelings. Eric denies it but Sarah admits she tricked his mama into admitting the truth. 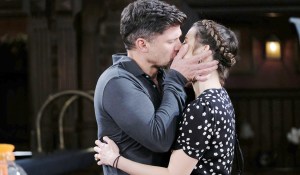 Eric doesn’t take vows lightly. Sarah confesses she was lying about being okay with them just being friends. She admits she said yes to Rex’s proposal because she thought Eric would never want her. Sarah says he’s been honorable but he now needs to be honest. He admits he has feelings for her. They kiss. Eric pulls away and they head home.

Nicole shows up at Eric’s place and Rex is astounded. She recognizes him and asks for Eric. Rex thought she was dead. Nicole demands his phone so she can call Eric but Rex won’t hand it over. He doesn’t think it’d be right for his brother to learn she’s alive that way. 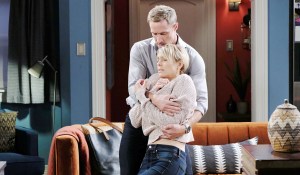 She agrees. She’ll wait. She wants to see Holly but Rex explains she’s not there. Nicole gets agitated and more so when she learns Holly lives with Chloe. Rex says Chloe’s good to her and she’s a happy girl. He offers to take her there but she passes out. Rex thinks she’ll scare Holly if she sees her in this condition. Rex checks her pulse and blood pressure as Nic worries her daughter doesn’t remember her. Rex lets Nic know that her blood pressure is low, she’s severely dehydrated and her temperature is high. He gets her water and she says, “Wouldn’t gin do the same?” Rex tells her that Eric’s still in love with her. She admits that’s what got her through this. When Eric and Sarah show up, Eric’s rocked to see Nicole standing there.

Rafe returns home and thanks Lani for babysitting. She can go but Lani lies that Eli told her to stay as long as she likes.