Gabi Agrees to Seduce Stefan As Part of Brady’s Plot

Wednesday April 3, 2019: On Days of our Lives today, Chloe pleads with Stefan to work with the police, Maggie confronts Rex about the engagement, and Kate suggests to Victor that they team up. 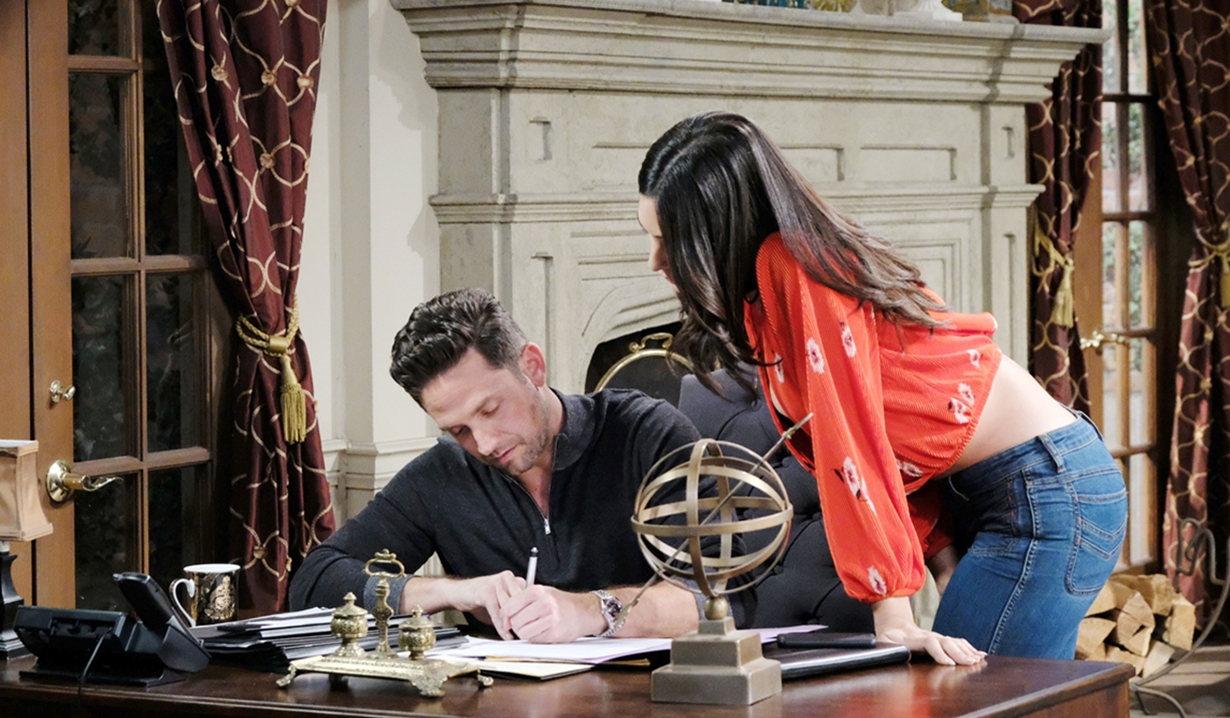 At the DiMera mansion, Stefan’s feeling down about Charlotte and shares an embrace with Chloe, who pulls back, she can’t do this until the people after her are caught. Eli and Lani appear – they’re closer to making that happen. They confront Stefan about knowing the suspects were in town…yesterday. Chloe views photos and more than one man looks familiar. Eli complains if Stefan had shared his information yesterday the people would be in custody. Once alone with Stefan, Chloe hollers – is he trying to get her killed? 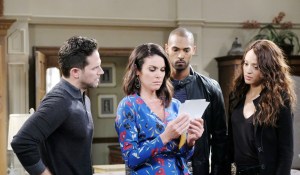 Stefan insists he’s all about keeping her safe and presses her to see they’d be good together. Chloe sees how good he’s been with the kids and promises they’ll talk about it once the men are caught. Stefan assures her they will be, and then they’ll build a life together.

In the park, Brady informs Gabi that Chloe’s in danger as long as she’s with Stefan. He wants her to help get Chloe out of there and lays out a plan. Stefan desperately wants a family 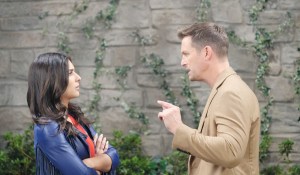 so it will hurt him if they rip Chloe and the kids away. Gabi’s convinced, but learns Brady wants her to seduce Stefan. Gabi flashes to kissing Stefan and complains he disgusts her. Brady offers her control over DiMera and Gabi Chic – if she seduces and marries him – then they’ll burn his ass to the ground. Gabi reveals she already ‘hate’ kissed him and Brady enthuses she’s already planted the seeds. Gabi can’t see why he’d marry her. Brady points out she and Ari are an instant family for him. “Go get ‘em, Tiger,” he urges.

At the hospital hub, Rex senses Maggie’s not happy about his engagement to Sarah. She can’t stand the idea that her daughter is marrying a serial cheater. Rex promises to never betray her again, 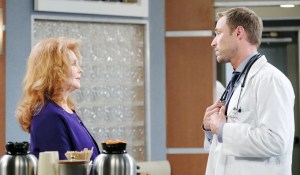 but Maggie’s unconvinced. Rex reminds her Sarah kissed Eric and Maggie says Sarah’s wrestled with her feelings for him. Rex is stunned; Sarah told him the kiss meant nothing. Maggie feels Sarah and Eric have a nice connection and she can trust him. Rex marvels that she forgave Eric for killing her son but can’t forgive him. Maggie can’t be sure Rex won’t hurt her daughter again. She suggests Sarah might be marrying him to get over Eric, and Rex is fed up – Eric told Sarah he doesn’t love her. Maggie suggests Eric lied because he didn’t want to hurt Rex.

In the square, Victor grumbles to Kate that he’d never hire her back at Titan. They bicker and Kate insists Victor needs her more than she needs him. She confides her interest in Titan is because it’s the best way to take down Stefan DiMera. Victor sniffs that it’s personal for her – he’s not getting caught up in it. Kate thinks he’s scared. Victor isn’t afraid of DiMera’s bastard son. Kate suggests they team up and reminds him of the power they shared before – it was intoxicating. She feels he lost his edge when he married Maggie. Victor’s defensive, but Kate paints a picture of them leaving their enemies quivering in fear. Maggie appears and Kate exits.

In the Brady Pub, Sarah assures Eric that Rex is thrilled about their engagement. Eric wonders what changed for her. She asks why he cares – it’s not like he has feelings for her. 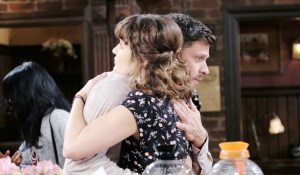 Eric cares – she’s his friend – and questions if she’s ready to forgive him. Sarah is ready to move ahead. Eric apologizes if he sent her mixed signals and learns that she accepted Rex’s proposal because she realized she was wrong in believing there was something between her and Eric. Sarah admits her mother is concerned and asks if Eric is happy for her. He’s happy if she’s happy. They hug, then talk about thwarting Brady’s attempts to get Eric to sue 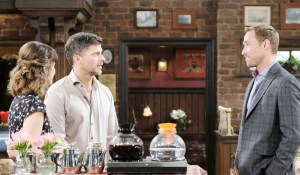 Chloe for custody. He is worried about her safety, however. Sarah thinks he’s doing the right thing by staying out of it. He values her opinion. They are talking about how important they are to one another, holding hands, and gazing at each other, when Rex enters. He pulls Sarah to his side and mentions the engagement. Eric tells him he’s a lucky man. Rex agrees.

In the park, Lani tells Eli that Chloe’s fear for her children reminds her of the overprotectiveness of being a mom. They agree they miss David and embrace.

At the club, Brady’s happy to see Stefan has a security detail on Chloe and tells her he’ll back off if she likes. She thanks him.

At the DiMera mansion, Gabi applies lipstick before bringing Stefan paperwork. She leans over him as he signs. They banter about the kiss. She suggests he hasn’t been able to stop thinking about it.

Rafe returns to Salem from his trip to California. 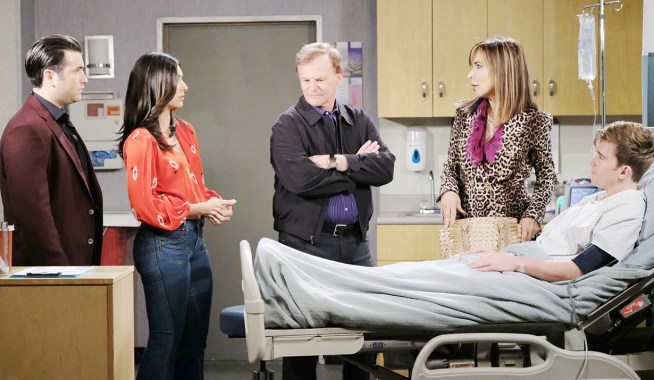 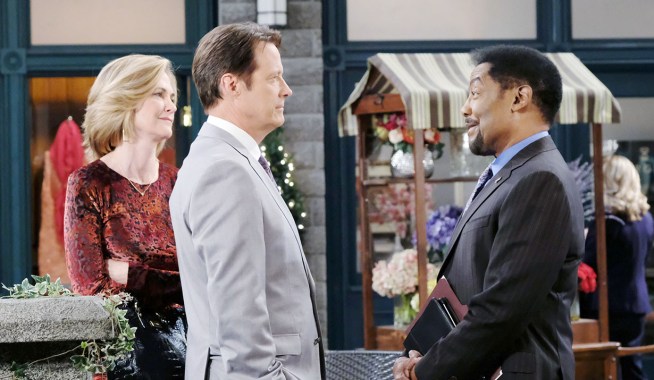