Jordan Confesses a Shocking Secret to Rafe – She Has a Baby

Friday March 29, 2019: On Days of our Lives today, Rafe's surprised by Jordan's big reveal, JJ is disturbed about Claire's lighter in her jewelry box, and Claire worries when Eve changes the master plan. 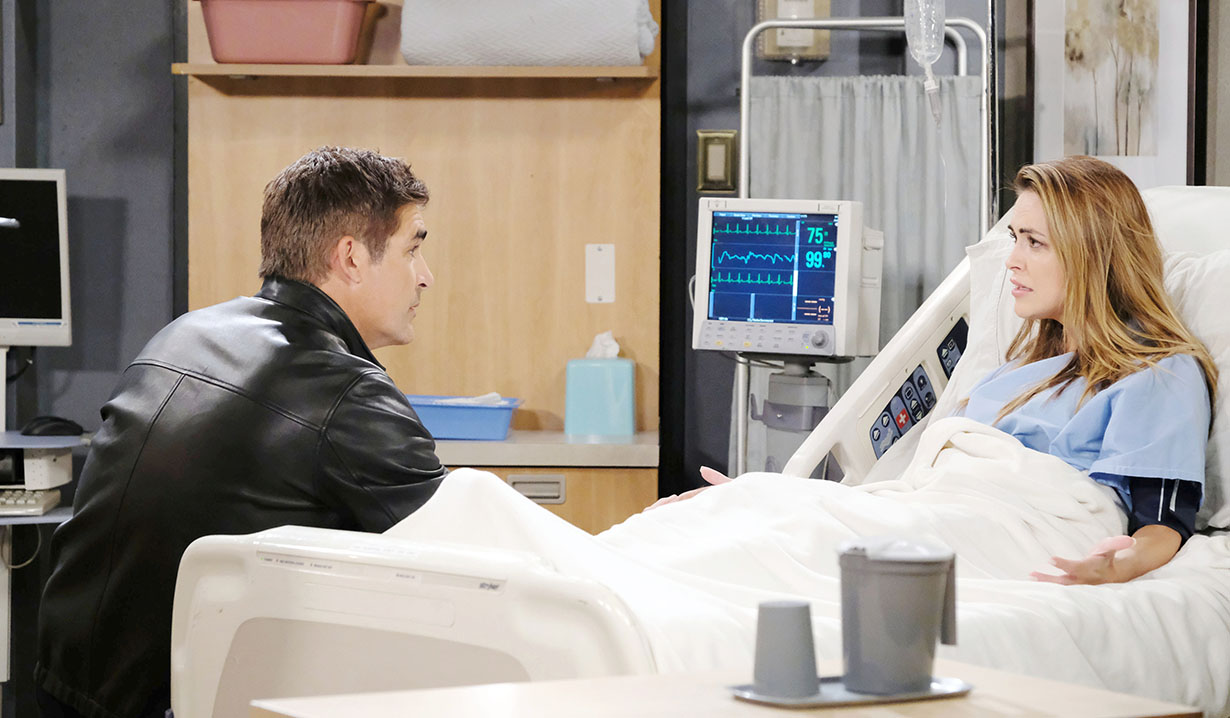 Ben’s grumpy that he had to be admitted to the hospital overnight. He urges Ciara to go home 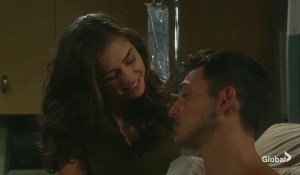 but she just wants to make-out so they do that for a while until Ben complains he’s all sweaty. Ciara decides to give him a sponge bath. Things get sexy and they snuggle and kiss.

At the loft, Claire rails that she and Tripp can’t spend the night at Salem Inn. Tripp tries to explain that they need to make this marriage look legit. She spazzes out and starts hollering. JJ finds it a bad idea since his dad and Eve live there. Tripp agrees to meet her there later anyway. Later, JJ rehashes betraying Haley. She appreciates what everyone’s been doing for her. Claire’s ring falls off her finger so JJ puts it back in the jewelry box and grabs the lighter. It puzzles him. He tells her the story about Ben terrorizing Chad and Abigail at the cabin and says he and his partner found a lighter just like this one at the scene. “It can’t be the same one,” he says.

In a room at Salem Inn, Eve babbles about the election as Jack sets up a recording device to record Tripp with Claire going at it. He sits on the bed and Eve starts to kiss his neck. He can’t do this. Eve shrugs. It’s not as if they haven’t done other things in that bed, even though they haven’t made love yet. She wonders if he won’t make love to her because of Jennifer. Suddenly there is a noise at the door – Claire appears. She snaps at them for being there. They show her where to press a button to start recording Tripp confessing to marrying Haley for immigration purposes. They leave and later, Tripp and Claire dine as she gets him to say that the marriage is a sham. They kiss on the bed.

Hope and Rafe argue at SPD about Ted, his blackmailing history and how he’s always hanging around. Hope almost lets it slip that Ted hit on her, then covers.

Jordan wakes up at Bayview and calls for Rafe upon realizing that she’s tied to the bed.

Back at SPD, Kayla calls Rafe to head to Bayview because Jordan’s asking for him. Rafe says this isn’t a good time for him to leave Salem. He’ll have to get back to her. He disconnects and Hope tells him to go so he takes off. Ted arrives and Hope fills him in on Abe finding out that he blackmailed Sonny. Ted blames himself. Hope claims to believe in second chances. She opens up about her fears that she’ll lose her job if Jack becomes mayor and Rafe if things get worse. Ted vows to back off.

Rafe arrives at Bayview and Kayla asks if he can calm Jordan down. 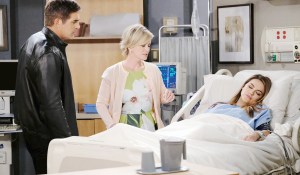 Jordan wakes up from sedation and talks her down. She has to “get to him” and make things right. She doesn’t know why she’s there so he tells her she set both cabin fires. She looks confused. She didn’t set the first one. Rafe wonders to Kayla who did. Later, Jordan tells Rafe she has a baby in California.

Jack and Haley arrive at the loft. Jack says he’s there to congratulate Tripp on his engagement. Jack taunts them about the upcoming wedding and JJ’s feelings for Haley and JJ yaps off about “wishing to hell” that his father had stayed dead. Eve defends Jack and JJ kicks them out. Once they’re gone, JJ takes his leave. Haley calls Tripp. She warns him about Eve and Jack’s suspicions.

Kayla catches Ciara and Ben smooching at the hospital. She checks on his hand and takes his temperature. It’s normal so he’s ready to be discharged. She tells him about Jordan’s setback and Rafe visiting her. They’re surprised to hear that Jordan denied setting the fire. That only makes Ben worry about being the number one suspect again. On their way out, JJ catches up with them and starts ranting at Ben. Ben tells him that Jordan denied setting that fire and JJ flashes to Claire’s lighter.

At the park, Jack laments going to the loft. Eve shrugs. She shows him the video of Tripp’s confession. They need to call a press conference. Jack yells, “No!”

Claire’s upset about a change of plans.

Rex Learns Sarah Cheated on Him by...