Wednesday March 27, 2019: On Days of our Lives today, Eric tells Sarah about Brady's threat, Claire goes to Eve about Tripp's wedding plans, and Brady admits his feelings to Chloe. 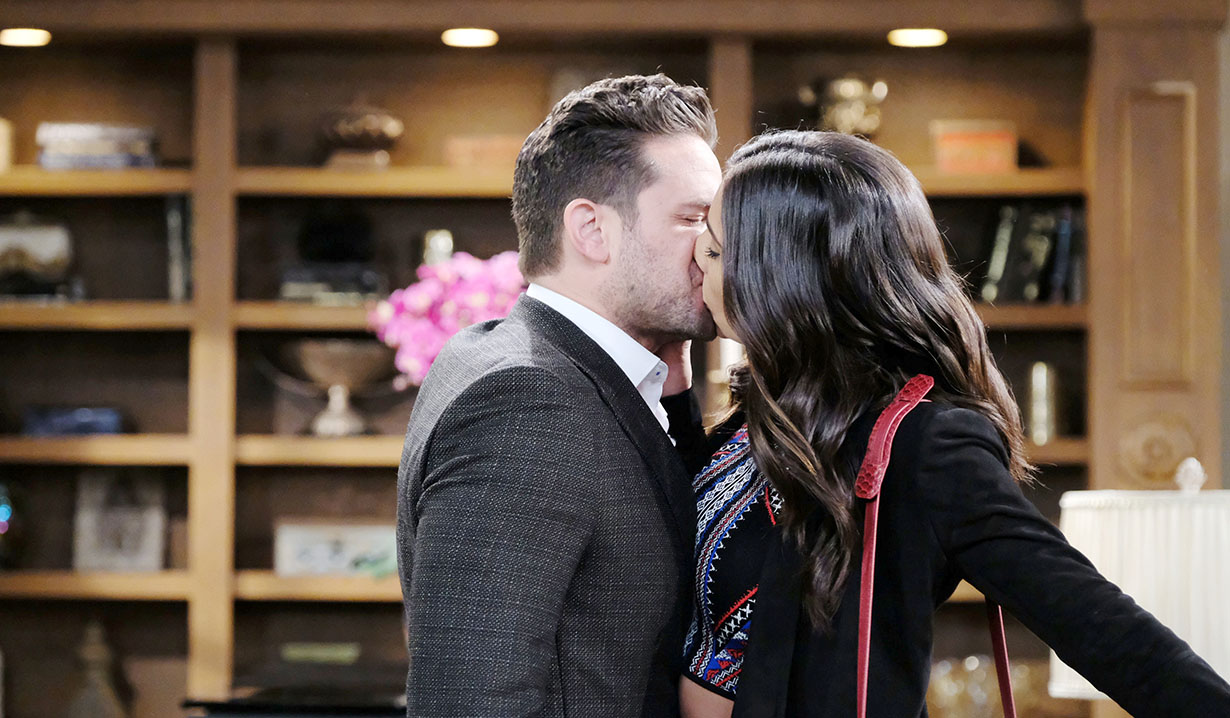 At the hospital, Rex and Sarah discuss John and Marlena’s love. Rex wants to make Sarah just as happy – if she lets him put her ring back on. Elsewhere, Eric learns Brady wants him to sue Chloe for custody or he’ll tell Rex about him kissing Sarah. Eric accuses him of blackmail. Brady insists he’ll do whatever it takes to keep Chloe safe – Stefan’s place was shot up yesterday, and he expects Eric’s help in protecting her. Eric maintains it’s blackmail, and noting Brady’s history with Chloe, thinks more is going on. Brady reiterates his threat and walks away.

At the DiMera mansion, Chloe flashes to Stefan asking if he stands a chance with her, and smiles. Gabi appears and snarks, “Don’t tell me you’re actually falling for that jerk.” Chloe confronts Gabi about telling Brady she and Stefan kissed. Gabi shrugs it off. They’re bickering 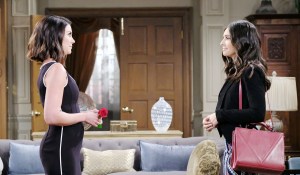 as Stefan appears and grins, “Are you ladies fighting over me?” Chloe explains the issue and Stefan reflects that Gabi doesn’t understand boundaries. Chloe exits for the club and Gabi mocks Stefan’s puppy dog eyes. He thinks she’s jealous. She sneers, “In your dreams.” They spar verbally. Stefan believes she can’t stand the thought of Chloe being with him because she wishes it was her. Gabi scoffs but pulls him into a deep kiss. Stefan pulls away and screams at her – why did she do that? She wanted him to sample something he’ll never have. He yells to get out. After, he’s shaken.

More: Cast your vote in the Sudzies Awards 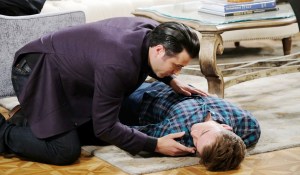 At the Kiriakis mansion, Will’s unconscious on the floor. Sonny calls 911 and urges Will to hold on, they’re so close to having everything they want.

In the square, Claire asks JJ how he feels about Tripp and Haley getting married. His face says it all. She says, “Me too.” Claire pushes for JJ to sell Haley on marrying him instead. JJ gets called away on an emergency.

In the loft, Haley worries to Tripp that they could get in trouble with the law for doing a Green Card marriage. Tripp suggests she get excited if she wants to make it seem real. He wants to get their story about falling in love straight. They practice the scenario of how they met and how he and Claire broke up over his feelings for Haley after Haley and JJ fought. They flash to an imaginary scene of kissing in the square, which leads to them imagining having sex.

JJ arrives at the Kiriakis house and checks Will out as he awakens and says he had a headache before he passed out.

Claire bursts into Eve’s suite ranting about this whole thing being a disaster – Tripp is planning to marry Haley. Eve decides it’s an opportunity – they’ll expose the marriage as a fraud; Jack’s voters will love it and Claire can be front and center. Claire protests – she can never do that as Tripp would hate her forever. Eve accepts that. Claire worries about losing Tripp. Eve thinks Claire should be furious with him – doesn’t he care how this makes her feel? Claire decides Eve’s right. Eve has a way to blow up the wedding before it happens.

At the hospital, Will tells Rex and Sarah that Leo put a Greek evil eye curse on him – it played out exactly as he said it would. Will recalls Diana just poisoned his grandma, and wonders if Leo poisoned him. JJ doesn’t think so. They’ll do blood tests, but Rex thinks there’ll be a logical explanation. At the hub, Sarah senses something’s going on with Eric. He fills her in on Brady’s request and threat. Sarah decides she’ll clean up this mess herself. Meanwhile, Rex tells Sonny and Will that Will needs to stay overnight. He exits, and Sonny assures Will that Leo never had an opportunity to poison him, and now he’s out of their lives for good. If something’s wrong, they’ll deal with it together. At the hub, Rex joins Eric and Sarah, who says she has a confession to make.

JJ arrives at the loft and informs Tripp and Haley he doesn’t think this marriage is going to work. Haley warns he won’t change her mind then goes upstairs. JJ tells Tripp to think this through – people won’t believe they’re the real deal. He talked to Claire and believes she’s as against this marriage as he is. Tripp thinks they should all work together. Haley reappears and Tripp asks JJ to be his best man. JJ accepts, but isn’t sure ICE will believe they’re in love. Tripp and Haley both say, “We’ve got this.”

Chloe’s perturbed to see Brady at Doug’s Place. He apologizes for coming on strong, takes her by the hand, and says he wants her. Chloe felt something when they kissed, but their marriage wasn’t great. Brady thinks they could get it right this time and promises he’ll do anything to keep her safe.

Ted’s in hot water with Abe, thanks to Rafe.

Will Passes Out and Is Unresponsive...

Rex Learns Sarah Cheated on Him by...