Thursday March 21, 2019: On Days of our Lives today, Sarah opens up to Maggie about her feelings, Haley reacts to JJ's proposal, Ted has an apology for Hope, and Haley accepts Tripp's proposal. 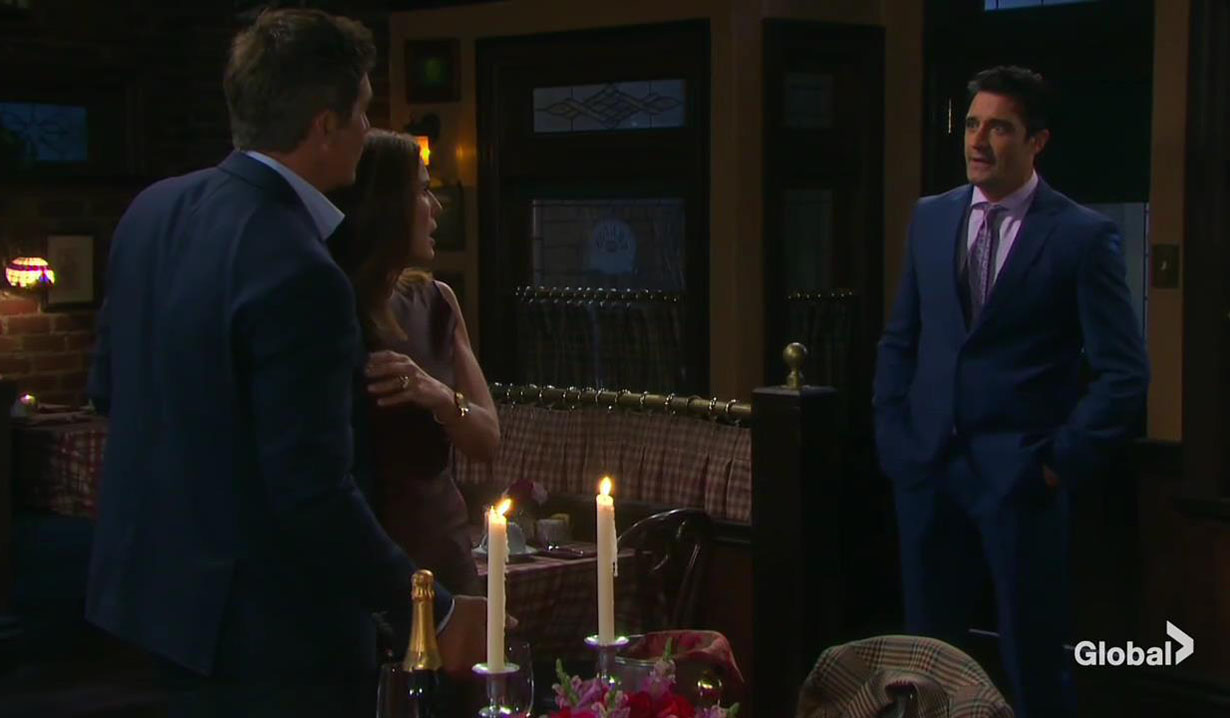 Sarah arrives at Eric’s place. She’s tried to fight her feelings for him but it’s impossible. She kisses him passionately. He pushes her away after a time and tells her about the deal he made with God to spare Marlena’s life. Rex comes from his room and beats on Eric, saying Brady was right. “You’re a liar and a traitor.” Rex wakes Eric up. He fell asleep on the sofa. Rex apologizes to letting Brady’s warning about him get to him. He knows now there’s nothing romantic going on between him and Sarah. Brady professed to lashing out.

At Mandalay, Tripp obsesses over what Jack did to Haley until Claire 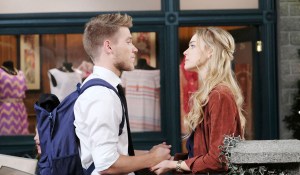 can’t take it anymore and calls him on it. Tripp’s shocked. Claire apologizes. She claims she cares for Haley. Tripp reveals their neighbor, Mrs. Carney, spilled Haley’s secret to the cops. Claire hopes he knows she’d never betray his trust that way. He’s sorry to have doubted her. They embrace. Claire vows to do a social media awareness campaign and a fundraiser for Haley. Tripp calls her the best girlfriend ever, and Claire beams. She’ll pick up dinner and see him at home.

Outside the pub, JJ asks Haley to marry him to keep her in USA. Haley gasps. He’s lost his mind. It’d be too obvious, she states, and knows he can be arrested for fraud. JJ has feelings for her and thinks their relationship would be real someday. Haley says he can’t fix this. He betrayed her trust and she can’t marry him. She needs to go back to the loft.

At the Kiriakis mansion, Maggie notices Sarah’s stressed out. 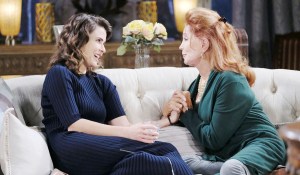 She guesses this isn’t about work. Sarah remembers Eric’s smile when he learned his mother came back to life. Maggie can tell her kid has it bad for Eric. She suggests Sarah reveal all but Sarah did and he turned her down after she kissed him. Maggie calls her impulsive and Sarah sighs, agreeing. She tears up as she summarizes what went down, that Brady caught them in a kiss but kept it from Rex. But Eric doesn’t feel the same about her. Maggie’s sorry. Sarah bemoans not listening to cues that Eric’s still mourning Nicole. Maggie offers a spa day tomorrow. Sarah passes. She’ll be fine. Maggie doesn’t want her to “commit to a life with Rex by default.”

At SPD, Hope and Ted talk about the shooting at the DiMera mansion and then Leo dropping his case against Sonny and Will. Ted agrees that there won’t be a conflict of interest again. Ted is trying to turn his life around and become a better person. He credits her for the change. She’s grateful. Ted apologizes for creating conflict for her and Rafe. He asks her to dinner and she laughs, thinking they need more sustenance than the doughnuts. They laugh as Rafe walks up. Ted leaves them alone and Rafe asks her to dinner tonight. She’s busy but says work can wait. They take off, arm in arm with Ted watching.

Sarah arrives at Eric’s. Rex is taking the garbage out so Sarah says apologizes for kissing him and accepts that he only wants friendship. Eric goes as Rex reappears. They smooch and dance until Sarah falls and sprains her ankle. Eric returns and grabs ice while Rex gets a compression bandage. When Eric places ice on Sarah’s leg, they gaze at each other.

Rafe takes Hope to the pub. Roman closed early so they could 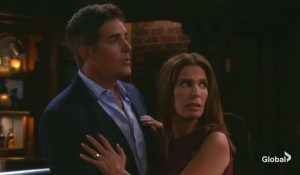 celebrate their one year wedding anniversary. They agree not to look back on what happened on their wedding day because despite everything, their wedding day is still the best of Rafe’s life. They snuggle and kiss and he calls her his top priority. He has all of these fun plans for them. Hope smiles happily. They make out until Ted shows up. He says there’s an update in the Chloe Lane case – there were two sets of footsteps leading away from the DiMera manse. Rafe looks upset but tells them to go take care of it.

Haley returns to the loft and tells Tripp that JJ asked her to marry him. 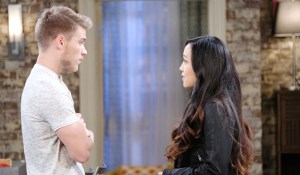 They discuss it at length. Later, Haley’s gone as Claire shows up. He has news for her…

Haley's Being Deported, so JJ Asks...