Marlena Dies and Goes to Purgatory With Tony and Princess Gina

Friday March 18, 2019: On Days of our Lives today, Marlena dies and winds up in purgatory, where Tony and Princess Gina show her what could happen if she doesn't go back. 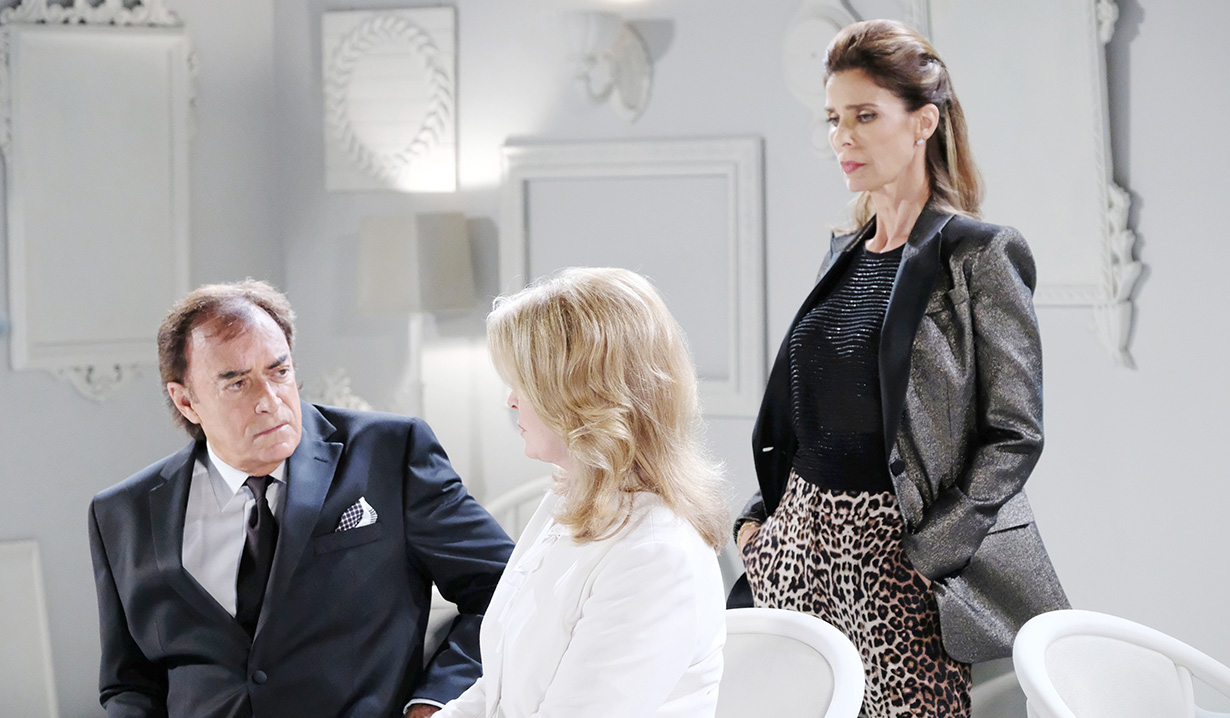 At the hospital, Marlena flatlines. Kayla looks forlorn as she tells John she’s sorry. Meanwhile, Marlena winds up in a white room, dressed in a white suit. A door opens and Tony DiMera walks in. Marlena hugs him. “You’re alive?” She laughs and cries, happy to see him but she’s confused as to where she is. She recalls eating a cookie and how she couldn’t breathe. Tony tells her she suffered anaphylactic shock. She’s dead – and so is he. He shows her a video of her in the hospital, dead. She wants to go home but he has someone who will escort her to where she needs to be. In walks Princess Gina. Marlena doesn’t think she belongs in heaven. Tony asks her to trust him. Marlena muses that she thought she’d see her parents, her baby and Samantha. Tony assures she will. 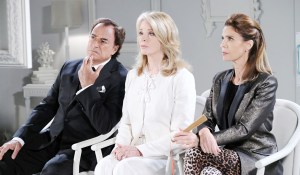 walks in through the same door Tony came through and tells him the man she’s with is an imposter there to take her to hell. The imposter is old-Andre and yells that Doc belongs in hell. She denies that. Andre reminds her of when she killed Alice Horton, Roman, Maggie, and Doug Williams. Marlena reminds him that he made her think that she did that. He snipes about her cheating on Roman and then shows her a clip of her being possessed by the devil and screaming. Marlena snaps at the imposter. She was possessed. The imposter says the Devil never left her – he wants her back. “Tony or no Tony, he will have you.” Princess Gina reminds Marlena that she led Poor Steffy [Stefano] on. Tony begs her not to listen. She shoves Fake Tony and Gina into the red door and Tony embraces her, thankful. He asks her to open the green door and asks her if she sees Anna…Marlena understands and smiles. Marlena can’t open the door so Tony tells her to fight. Remember what she has to live for. He has her look again at the screen. She sees her embracing John after a return from the dead at the docks and Marlena telling Will that he was born with charm, wisdom and being gay is the same. A cause for celebration. Marlena watches as she talks to Claire, then weds John in 1999, then the most recent wedding. Marlena tries to open the door again but she’s too weak. Tony asks if she has any idea what’ll happen if she doesn’t go back. Gina returns. She knows. They all sit and watch the future…

At the Kiriakis mansion, Will yells at Leo for not divorcing Sonny. Tony says John chooses Leo over Will. 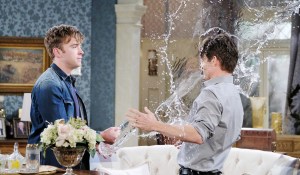 They continue watching as Leo kisses Will and Will punches Leo and yells that Leo gives gay men a bad name. Leo wants him and says he’s thirsty so Will throws water at him and then shoves him. Leo hits his head on the mantle but gets back up to taunt Will that he’d never be rid of him. Leo attempts to kiss Will and Will strangles Leo to death. Marlena yells, “Will no!” Will is charged with Murder One by Belle Black. Marlena’s shocked to see Claire is arrested too. Gina says it’s history repeating itself. Belle yells, “You and Ciara are family. How could you sell her baby on the black market?” Tony says Ben didn’t continue therapy, he left Ciara and she turned to Tripp. The baby was theirs. They watch the screen again as Claire wishes Grandma Marlena was there since Belle refuses to bail her daughter out. Gina snaps her fingers and they watch Belle hugging Marlena’s urn while drunken brothers, Brady and Eric fist fight like little girls nearby as Sarah attempts to stop them. Gina turns to the camera, breaking the fourth wall and says, “Like sands through the hourglass, so were the Days of her Life.” Gina says her boys are fighting over Sarah. Rex broke off with her and when Eric didn’t want her, “Slutty Sarah, and she is, deliciously slutty,” went to another man. Brady. They continue to watch as Brady tells Eric 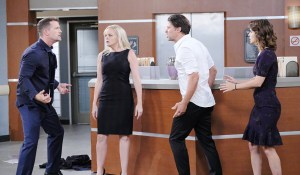 how great it was to have sex with Sarah. Tony says without Marlena there, they couldn’t stay civil. They watch some more as Belle gets in between them. The urn goes flying as do the contents. Princess Gina apologizes and waves her fan in Marlena’s face. Brady doubts Marlena’s love and then talks about John remarrying. He walks through Marlena’s ashes and almost falls. Everyone’s mouths gape and Tony snaps his fingers and shows John marrying Hattie Adams. Marlena’s shocked. Hattie spits out her gum and kisses John. Marlena tries snapping her fingers but it doesn’t stop so Gina snaps hers and Belle catches the bouquet after dropping Marlena’s urn, causing Hattie and John to do a spazzy dance. Back on earth, John sits with Doc.

Leo tries to get inside information from his new brother.

Leo Learns John's His Father, Then...

Shots Are Fired at Ciara and Ben at...