Thursday March 7, 2019: On Days of our Lives today, Jack wants to make an example of Haley Chen, Gabi squares off with Stefan after seeing him kissing Chloe, and JJ vows to help Abe defeat his father. 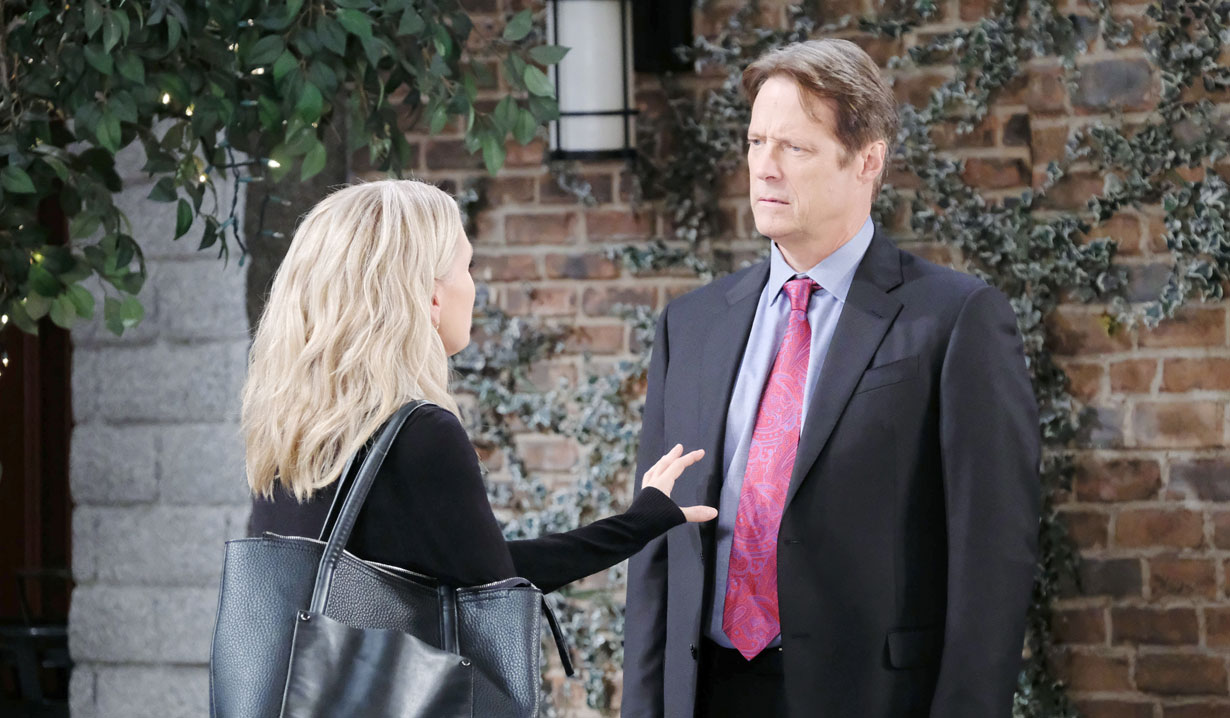 In the square, Sheila and Abe’s hands touch as they pass flyers for the homeless fundraiser. Nearby, Jennifer tells Lani there may be a new mayoral candidate. Jenn joins Abe and Sheila to update them, and Abe worries Jack has a killer instinct for winning a campaign.

Jack arrives at the suite and tells Eve that the feedback from constituents was positive – the party has agreed to back his campaign for mayor. Eve’s thrilled. Over bubbly, Jack recalls Abe’s running a fundraiser in the square. Eve thinks that’s a party they need to crash.

At the SPD, JJ tells Eli he’s known Haley was undocumented for a few weeks. He asks if there’s any way to keep her from being deported. Eli learns JJ spoke to Haley briefly, 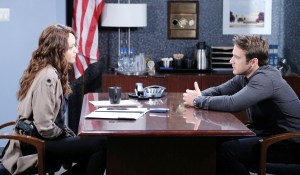 and she said she was safe. Lani enters as JJ complains about what Jack did. Lani reveals Jack may soon be in a position to ruin more lives…as mayor. JJ worries he’ll be cutthroat against Lani’s father. Lani assures him Abe will be fine. JJ opines if Haley’s deported, he may never forgive his father. Lani realizes he cares about Haley – she wants him to be happy. JJ’s happy for Lani and Eli as well.

At the loft, Haley worries Tripp’s girlfriend may have a problem with her staying there. He suggests she hide as Claire enters. She announces his friend, 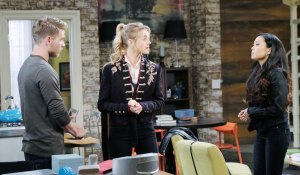 Haley, is running from the police – does he know where she is? Tripp asks Claire to hear him out, then has Haley come out – she’ll be staying there for a little while. Claire enthusiastically greets Haley and agrees to help her, but isn’t sure Ciara will feel the same. Tripp confirms Ciara already knows. He hugs Claire in thanks, but her smile disappears over his shoulder. Haley goes upstairs. Claire acknowledges she’s insecure sometimes, but is fine with Haley staying there.

In the park, Brady updates Gabi on Chloe being angry he had her followed – she ripped him apart in front of Stefan. He wants Gabi to help him wipe the smug look off DiMera’s face. Gabi’s not keen, but Brady gets her agree to think about it.

In the DiMera parlor, Chloe pushes away from Stefan’s kiss and asks what he’s doing. Stefan purrs that he’s following her advice to get over his obsession with Abigail. Chloe meant he should go to a bar or get on Tinder. Stefan feels an attraction to her, though Chloe feels they hardly know one another. Stefan thinks they’ve bonded quickly. Chloe admits she finds him attractive, and Stefan suggests they kiss again – if she feels nothing they’ll continue on as roommates. They’re kissing passionately when Gabi appears. She clears her throat and Stefan snaps, “What do you want?” Chloe exits, and Stefan signs Gabi’s paperwork as she rants about him taking advantage of vulnerable women – she thinks Chloe must be desperate. Stefan sees through her – she was jealous when she saw him kissing Chloe. Gabi insists he makes her stomach turn. He smirks as she goes on about how he’s awful and destined to be alone. Stefan runs down her dismal romantic history. Chloe reappears. Gabi advises her to get out while she can. Later, Stefan vows to make Gabi’s life miserable. Chloe admits she’s conflicted about their kiss. Stefan’s a patient man.

Brady joins Sheila and Abe in the square as Eve and Jack appear. Jack announces his candidacy for mayor. Jennifer questions Jack about his platform. 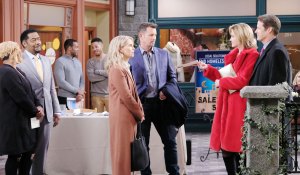 Jack intends to protect citizens from illegal immigrants like Haley Chen. Jennifer argues whether she’s a criminal or a threat as does Abe after Jack criticizes him for being weak on crime. Jennifer glares at Jack. Meanwhile, Brady accuses Eve of masterminding Jack’s run for mayor and encouraging him to regress. Eve thinks he’s judgmental – she’s trying to make a new life. Brady counters she’s trying to steal Jennifer’s. Jack speaks privately with Jennifer, who calls his performance sad – he became a better man and she wants to believe her Jack is still in there. If he continues on this path, he’ll have lost his soul.

Abe joins Eli, Lani and JJ at the SPD and confirms Jack’s running for mayor and gunning for Haley. JJ’s appalled and sorry he ever trusted his dad. He’ll do anything to help Abe win.

At the loft, Claire is dismayed when Tripp comforts Haley after she sees Jack on the news. They watch the footage together, and when Tripp and Haley leave the room, Claire calls Eve.

At the Kiriakis mansion, Gabi has been reminded of Stefan’s cruelty and tells Brady they need to destroy him. She reveals Chloe and Stefan were kissing.

Diana hatches a plan to get rid of Marlena.