Wednesday February 6, 2019: Eric thinks there's an intruder at his place, Roman learns that John's got a conundrum, and Diana is confused as to why Leo is being a homewrecker. 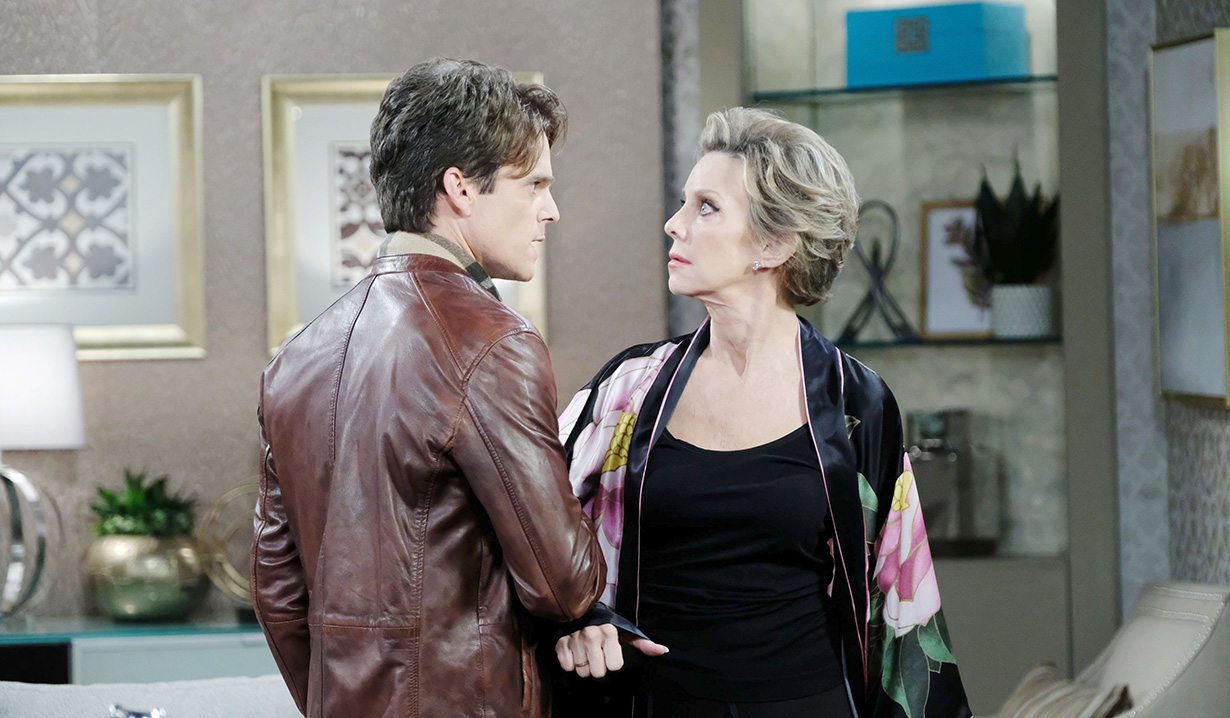 Eric hears banging from outside his apartment door and distressed, grabs a 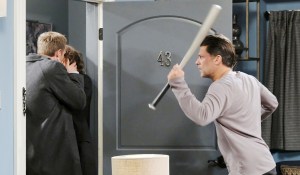 baseball bat and opens the door, ready to strike, when he sees Rex making out with Sarah against the wall. Rex and Sarah jump. There are apologies all around. Eric takes off. Rex tries to start things up again but can tell Sarah can’t get Eric out of her head. They talk about their relationship woes. Sarah can’t help but think she wasn’t good enough for Rex. Rex denies that is true. He blames the cheating on his insecurities. He felt unworthy of her and hates himself for what he did but wants to make happier memories. He knows her trust will take time. She agrees but thinks they can still have sex. They make out.

At the pub, Roman hears the story of Diana Colville returning to Salem. “Talk about a blast from the past,” Roman says. John flashes 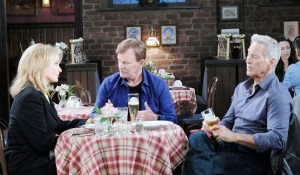 to wondering about Leo’s paternity. Marlena’s tired so she leaves. She bumps into Eric who tells her about Rex entertaining Sarah. Marlena tuts. She heard about Rex and Sarah and asks if it’s possible that Sarah went back to Rex because she didn’t think Eric wanted her. Back inside, John confides his suspicions to Roman that Leo may be his son. “Nobody sat you down and told you how not to get a woman pregnant?” Roman asks. He suggests asking Diana for the truth but John’s not sure he wants the answer.

Diana’s reluctant but lets Leo in when he shows up at Salem Inn. He bought her a one-way ticket out of Salem. He wants her gone. He accuses her of ruining his life but she credits him for doing that. Leo doesn’t feel supported by her. Diana is sorry to hear that. Leo rants about her being unable to handle it when Leo came out as being gay. Diana has no issue 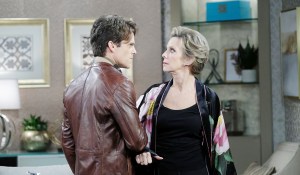 with that but she has an issue with him being a sociopath. She doesn’t understand why he chose to ruin the lives of two perfectly good men. What’s more, she’s not leaving. Leo accuses her of staying for John Black. Diana shrugs that it’s been a long time since they were together. Leo worries that one too many drinks and she’ll open up the vault and tell his secrets. Diana asks what secrets – him being a murderer? Leo warns her to stay quiet but Diana knows that if Sonny finds out, he’ll be back with his beloved ex-husband. Diana recalls a time when Leo was sweet, funny and athletic. He made her proud. Then he took his father’s life – someone she cared deeply for. Leo remembers things differently. He recalls their arguments and that the man beat on Diana. Leo feels he did the world a favor by getting rid of him. Diana yelps, and her eyes widen in astonishment. “He was an evil, abusive pig,” Leo hollers. He threatens to kill her if she doesn’t keep her mouth shut.

Tripp finds Claire in the square. They kiss until Ben finds them and reveals that Ciara’s gone missing. Tripp says if he knew where she was, he wouldn’t tell him. Pissed, Ben takes off while they worry about Ciara. Claire’s insecurities come out as Tripp worries so he reassures her that he’s with her now.

Abigail’s shocked to find Jordan on her doorstep. 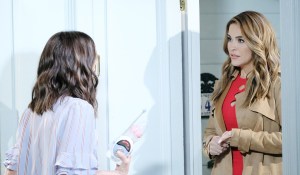 They embrace and head indoors where Jordan says she returned to protect Abigail from her brother.  Last time they spoke, Ben seemed agitated and stopped taking her calls so she flew there. Abigail updates Jordan on her relationship issues with Chad and that Stefan hired Ben as head of security. She admits last time she saw Ben, he had a crazy look in his eye but she can’t live her life in fear so she’s moving on and trying to let Ben do the same. Jordan knows Abigail deserves peace. They say goodbye and while Abby is in the kitchen, Jordan sneaks upstairs.

Ben finds Eric talking to Marlena outside the pub. He laces into her for telling Hope all about their session and calls her a “two-faced quack.” Eric grabs him and defends his mother. Marlena explains she didn’t betray his confidence lightly. Confidentiality doesn’t apply if she feels she has evidence to a crime. Ben rants about being sold down the river and how Hope and Ted are breathing down his back. He gets in Marlena’s face and Eric gets between them. Ben says he’d never hurt Ciara and now she’s missing and has nobody but him to find her. He yells at Marlena to go to hell. Eric leaves and John appears. Doc says she ran into Eric. They head home.

Eric arrives home to find Sarah’s clothing all over the floor.

In his room, Ben looks at Ciara’s photo and promises to find her.

Sarah tries to get Eric to forgive her. 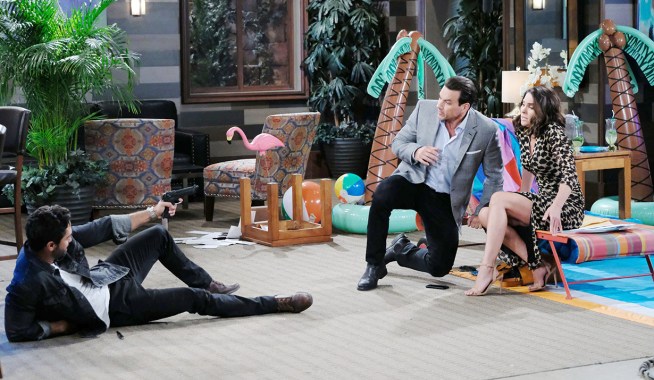 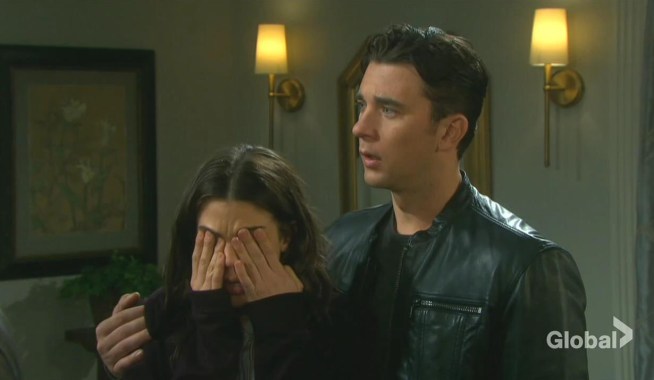