Ben Manhandles Claire, Begging Her to Help Him Find Ciara 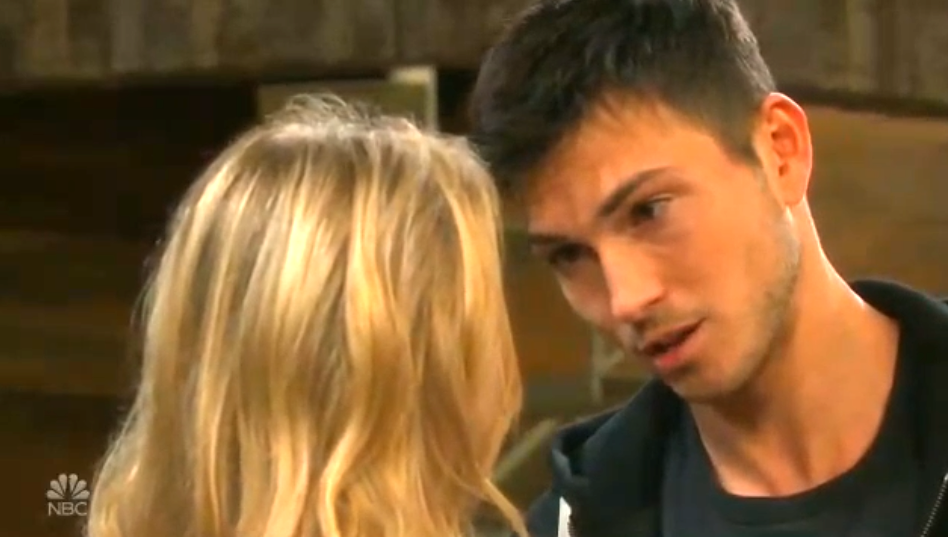 At the hospital, Marlena tells Sami on a call that Will’s fine. She touches base on Sami’s 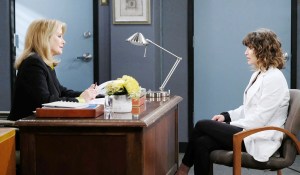 great support team there and offers to lend an ear if needed. They disconnect and Sarah appears looking for a consult about an agitated patient. Sarah brings up her concern that she has ruined her friendship with Eric. Marlena doubts that and urges her to talk to Eric but since Sarah reunited with Rex, Eric hasn’t wanted to listen. Marlena’s surprised, causing Sarah to ask if she did the right thing. Only Sarah can decide that, Marlena says. Sarah comments that her mom thinks she’s settling but she insists she’s not.

At Eric’s place, Eric tries to watch the game with Rex but all Rex wants to do is discuss Sarah. Eric lets Roman in with some grub and the men resume watching. 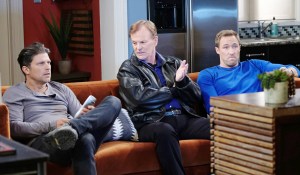 He notices his sons aren’t enthusiastic and asks what’s up. He hears crickets. Later, Rex has told Roman that he and Sarah are back together. He notices Eric’s not happy about it. Eric suddenly realizes he has something to do and takes off into his room. When he returns later, Roman says Rex went on a date with Sarah after he explained what happened – he’s sorry.

On the sofa at the loft, Tripp and Claire bask in the afterglow of their love making.

At JJ’s, Haley wonders if JJ is comfortable with her living there. He’s breaking the law. JJ refuses to kick her out. In fact, he may have a way to help. They discuss Melinda kicking her out so that she could keep her mayoral 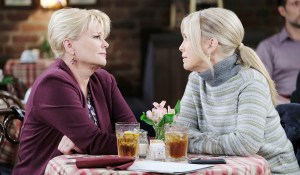 candidacy going. Haley’s angry that he’s trashing her sister. She knows he wants to but he can’t save her from this. She goes.

At the pub, Jenn and Adrienne discuss Jack running for mayor. Jenn says Eve convinced him to run. She’ll mold him into the man she wants. Jenn is worried she’ll succeed. He sounds ruthless. Jenn talks about telling Jack about Rolf’s serum and he seemed angry that he couldn’t get to it. He seemed resigned.

At Salem Inn, Eve tries to seduce Jack as he reads about Xander online. He questions why Xander would turn him over to Eve and admits he had a bad vibe from the man. Eve tries to make light of things and then starts kissing Jack until he stops to tell her about the serum he can use to bring his memories back. Eve sighs, upset Jennifer told him. When Jack tells her about the diary containing the formula, Eve feigns innocence. Jack can’t stop thinking about it and stops kissing Eve and goes for a walk. 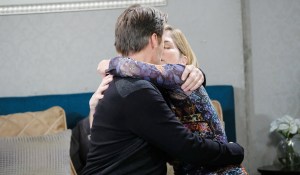 Later, Ben arrives at the loft to see if Claire has heard from Ciara. She hasn’t. Ben asks if Tripp knows that he and Claire teamed up to break up him and Ciara and Claire’s mouth drops open. Tripp demands to know if this is true. Claire lies that it’s not. Ben shares that it’s the reason Ciara left town. Claire yells at Ben for opening his “big mouth.” Tripp is upset. Claire tries to explain it away but Tripp walks out, angry. Ben begs her for help in getting through to Ciara but Claire thinks it’s too late and she’ll probably get back together with Tripp. Claire grabs his arm and Ben becomes unglued and tells her to get her hands off of him, “You little bitch.” He refuses to be used and thrown away. She needs to stop. Claire’s lips quiver. He’s scaring her. Ben won’t hurt her but he needs to get to Ciara to fix this.

Jack arrives at the pub. Adrienne hugs him, happy to see him, then apologizes. She offers to dine with him but he looks at Jenn and says some other time, before he rushes off. Adrienne’s crushed. Jenn cries that things were easier when he was dead. He’s here but so far away.

Jack shows up at JJ’s. He felt drawn there and admits he feels a connection to him that he hasn’t felt to anyone else in Salem. JJ smiles. They have beer and Jack asks what’s troubling JJ. JJ fills him in on what’s been bothering Haley.

Tripp finds Haley in the park. Both have had better days. He talks a little about his ex getting involved with a jerk. Haley knows what it’s like to have a decision blow up in your face. Tripp invites her for lunch on the chef who accidentally burned him so they head to the square.

Back at the hospital, Rex sees Sarah. They’re looking forward to their date.

Eli and Lani Profess Their Love for...