Tuesday January 29, 2019:  JJ learns everything there is to know about Haley's past, Maggie reveals she knows Rex cheated on Sarah with Noelle, and Trask threatens Marlena. 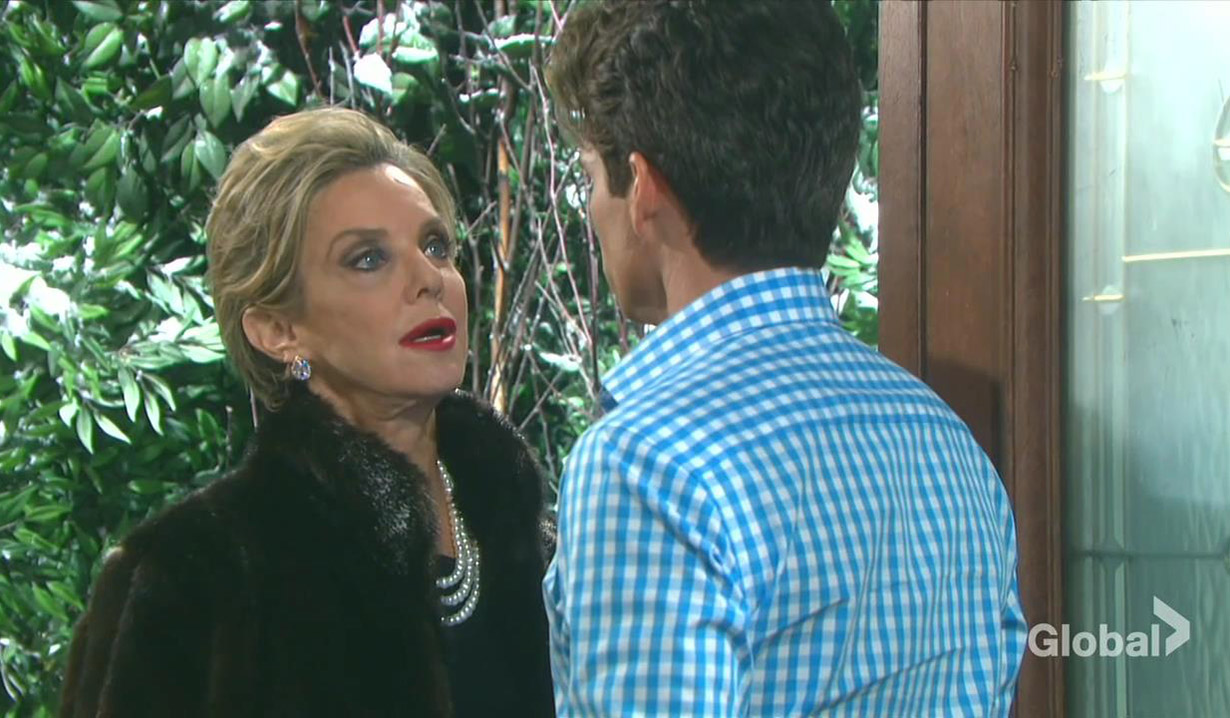 Haley arrives at JJ’s after work. He jumps on her to discuss her being an undocumented immigrant. He lets her know he’s not judging her. She reveals she grew up in Beijing and how her mother gave up everything in the Philippines to be with her father in China. Haley’s dad was cold while Haley had a good relationship with her mother. Melinda came to North America early on before her father died in a car accident. Haley admits her mom died years later due to cancer. It was her mother who gave her money and a secret arrangement to get to the states. Haley emotionally recounts that Melinda didn’t welcome her with open arms once she arrived. She had a husband and demanding job. Haley was a complication – a burden, but eventually, Melinda supported her financially and emotionally, until she decided to run for mayor. It wasn’t enough for her to fly under the radar, so she attempted suicide. Haley’s felt fortunate to have Marlena to talk to and asks if he’ll keep her secret. JJ promises.

From home, Sonny gets a call from Will. John found Leo’s mother! Sonny’s giddy with excitement. Meanwhile, downstairs, Leo opens the door, thrown to see his mother, Diana Cooper, (played by Judith Chapman) standing there. Leo drags her outside in order to get rid of her. She reports that a man was following her and claimed that her son was going by the name of Leo Stark. She’s merely warning him. Leo panics. They can’t talk there so Diana lets herself inside and grabs a drink. Exasperated, Leo tries to get rid of her but it’s too late when Sonny wanders in and introduces himself. Leo says this is his personal shopper. Diana laughs and introduces herself as Matthew’s mother. Sonny’s thrilled to meet her. Leo seethes as Sonny asks Diana to stay and tell him all about her son. Sonny wants to hear the nitty gritty. When Diana suggests Sonny to get a drink and says she’ll spill, Leo jumps up and yells to stop. He knows Sonny tracked her down in order to use her to get rid of him. Sonny plays innocent. When Will texts, he leaves the room. Leo tells Diana to get out. He helps her up and she hauls off and hits him across the face.

Eric arrives home and finds his brother and Sarah have reunited.

Eric apologizes to Sarah for blowing up at her for finding her in bed with Xander. He feels responsible but Sarah clarifies that was her choice. She takes off for work while Eric broods. Rex knows how Eric’s feeling. Sarah tends to retaliate when angry instead of thinking. Rex hopes he and Sarah can be friends again. Eric’s not so sure. Rex says as much as it hurt that Sarah had sex with Tarzan, it’d be worse if it was Eric. That’s how he and Noelle got together. He was comforting her and it led to sex.

Sarah rushes into the hospital, late for her shift when Maggie takes her aside. She got a call from Liz Curtis who blabbed about Rex sleeping with Noelle. Maggie’s sorry. Sarah sighs. Noelle’s been calling but she can’t talk to her yet. Liz thought the tryst was appalling and wanted to know how Sarah was doing. Sarah doesn’t think 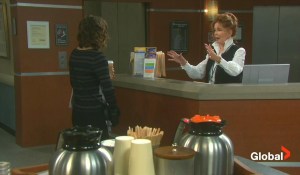 she’ll be able to work this out with her sister. Maggie’s glad Sarah dumped Rex at least. Sarah admits she took him back. Maggie cries that he was happy to reconcile while sitting on another huge secret! Sarah confesses she’s made mistakes too. “It’s not as if you slept with his brother,” Mags says. “I sure as hell tried,” Sarah declares. She tells her mom the details, including Eric finding her in bed with Xander. Maggie looks dumbstruck and cries. Sarah reassures that she’s got her eyes open with Rex.

John kisses Marlena when he walks into the pub, then begins to fill both her and Will in on Leo’s mom when Trask walks in, demanding to talk with Marlena. They leave while John admits he never spoke with Leo’s mother – his contact did. Outside, Melinda threatens to sue Marlena if she reveals that her sister is an illegal immigrant. Marlena laughs her off.

In the foyer at the Kiriakis mansion, Sonny calls Will and tells him that Leo’s mother is there. Back in the lounge, Diana calls Leo a parasitic leach and warns that he better treat her with respect. She orders him to apologize so he does. She reminds her son that she has the goods on him that could ruin his marriage. Sonny returns and things are tense. Sonny offers her a room in the mansion but she wants a hotel room so Sonny offers to pay for it.

Rex Kisses Sarah After She Agrees to...