Rex Kisses Sarah After She Agrees to Another Chance at Love

Monday January 28, 2019: Rex and Sarah talk about their relationship, Jennifer introduces Jack to Will, and Marlena counsels Eric about his feelings for Sarah. 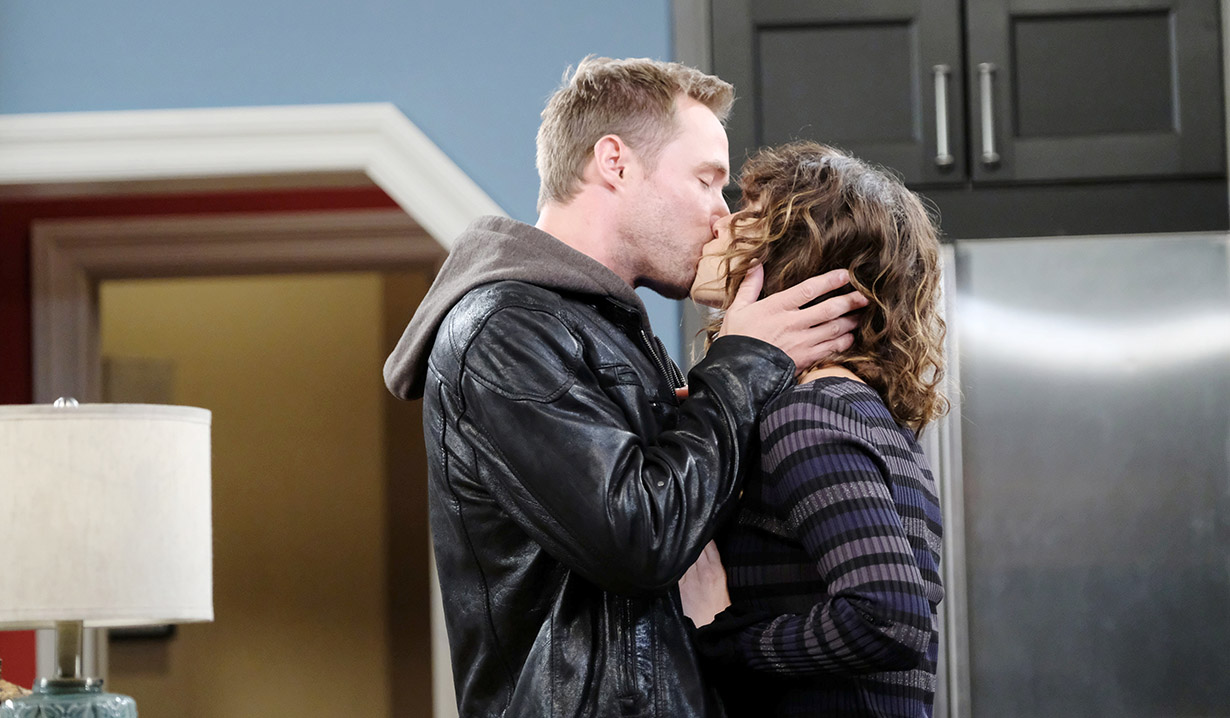 In the square, Jenn tells Jack that Eve has an agenda. “Don’t you think I’m smart enough to see through Eve?” Jack asks. Jenn says still, Eve has something up her sleeve. 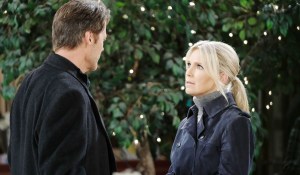 Jack assumes she doesn’t want him running up against her good pal Abe. He doesn’t like that she tells him only negative things about himself. He won’t turn his back on Eve.

Eve finds Xander in her room at Salem Inn. How did he get in there? He states that he can get into anywhere he wants and once he’s there, he warns that he can take whatever he wants. Xander reminds her she didn’t hold up her end of the bargain. He shows her that he’s taken Rolf’s diary. “I think that makes you my bitch, wouldn’t you agree?” Eve fights him for it. They roll on the floor for a while until Eve gives up in a huff. Xander will return it if she goes to Victor and has him reinstated as CEO. She thinks he should just leave town. Nobody wants him. Xander shrugs. A few people find him desirable. She thinks that’s an invitation for a shag but he informs her it’s not.

From home, Sonny texts Will, asking for news from 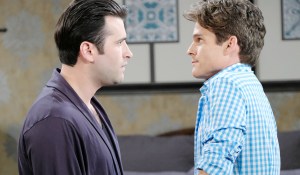 John when Leo appears, wanting sex. Sonny is disinterested. Leo sulks. Sonny tells him to “sleep with someone else.” Leo tried but Xander turned him down. Sonny’s incredulous. Leo explains the blackmail. He demands sex or he’ll give the incriminating photos to the cops. Sonny looks at him stone-faced, then says to go ahead. He’ll lose everything too. Leo will consider his words.

Will meets Marlena at her office at the hospital. She has no news about Leo’s mother but is supportive that Will and Sonny will find their way back to each other despite Leo.

At Eric’s, Sarah takes Eric’s hand and is about to tell him something when Rex walks in. He asks, “Holding hands and looking soulfully into each other’s eyes for no reason? How long has this been going on behind my back?” Sarah flashes to wanting revenge sex with Eric while Eric explains nothing is going on. Rex questions why she has condoms in her bedroom. Sarah spits that it’s none of his business. When he pushes, she admits she had sex with Xander. Eric says that’s why he’s upset, then runs away. Rex can see that Sarah wanted to take revenge with his brother but in the end, she wound up hurting herself. He offers to talk to his brother but Sarah doesn’t want that so Rex asks to discuss their relationship. He’s ashamed by his behavior and will do anything to get her back. He’ll never cheat again. She asks why he did in the first place so he tells her it’s because he was afraid of committing. He plans on making up for all the pain. He loves her even if she doesn’t give him another chance.

Will strolls by Eric on his way out of Marlena’s office. Eric tells his mama he isn’t sure if he needs a shrink or a mother. Marlena thinks it’s lucky she’s both. She invites him to talk and he fills her in on Rex admitting to Sarah that he had sex with Noelle, and Sarah wanting to lose herself in sex with him. When Eric refused, she jumped in bed with Xander. How could she? Marlena asks if he is jealous. Eric muses that he still loves Nicole. What kind of a man would he’d be if he moved on so soon? Marlena says it’s called being human but she understands the guilt he feels. She tells him to go on with his life. Eric says Rex is back and wants Sarah back. Marlena suggests he talk to Rex. Eric refuses to hurt him the way he did Brady. Marlena suggests that denying his feelings doesn’t help Rex, either.

Jennifer sees Will nearby at the square and calls him 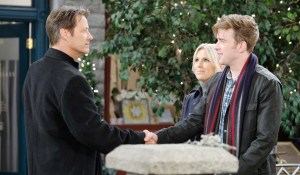 over to introduce him to Jack, knowing they’ve a lot in common. Will remembers Jack, which makes Jack wonder how that’s possible. They explain Dr. Rolf’s serum brought back Will’s memories. Excitedly, Jack asks for the serum. Will explains it’s impossible to get it but offers to talk if Jack ever needs it. Later, Jenn tells him he looks like the man she fell in love with but he isn’t that man.

At the Kiriakis mansion, Leo gets the door. “Oh sweet mother of God,” he breathes.

Eric walks in on Sarah and Rex kissing. Rex shares that Sarah has given him a second chance.

Leo’s horrified when his mother arrives in Salem.

Haley's an Illegal Immigrant and...