Haley’s an Illegal Immigrant and Shares Her Secret With JJ 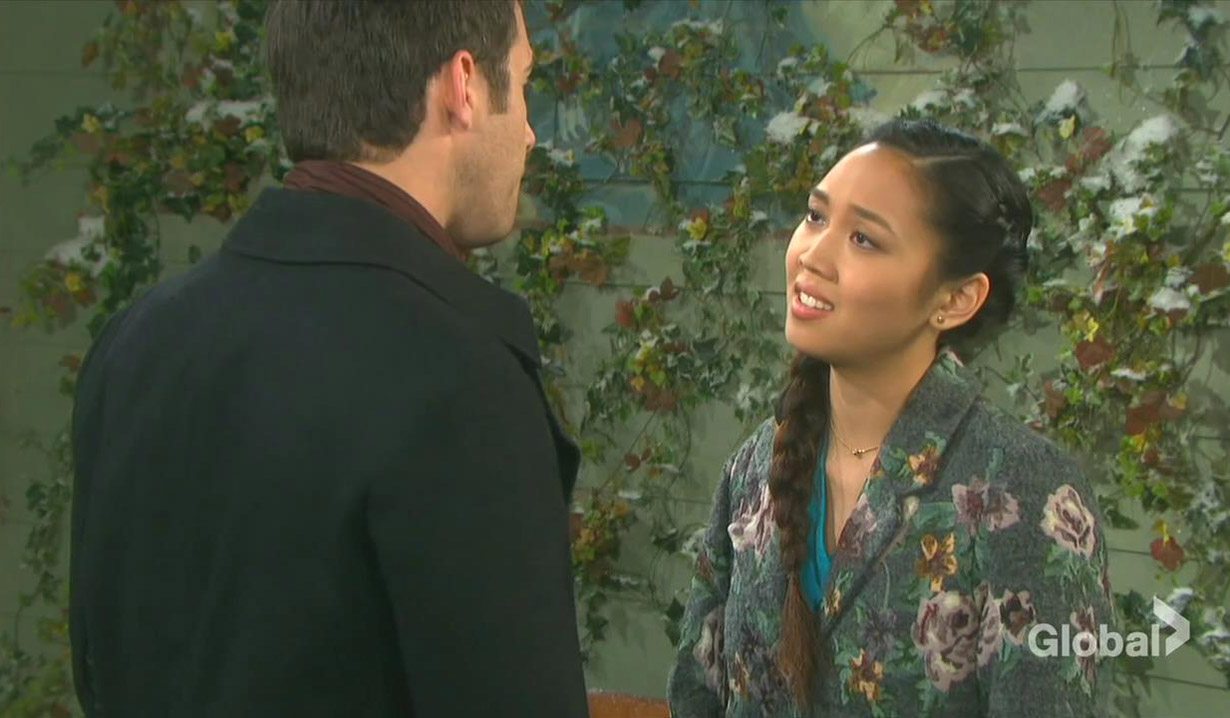 At JJ’s place, Haley flashes back to singing with JJ and smiles to herself. JJ brings coffee and tells her Abe Carver got a new challenger on the race for mayor. Why didn’t she tell him her sister was running? She was hoping Melinda would change her mind. She takes off when he starts asking more questions.

Jenn goes to Abe at the square to get a 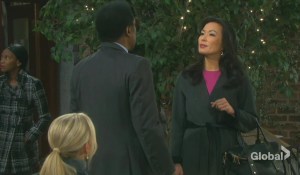 statement from him on the new candidate. He comments that his challenger has no business running for office. He gets all worked up and trashes the candidate until Melinda Trask walks up and tells him if he’s going to trash her he should do it to her face. Jenn gets in on the trashing and Melinda laughs that The Spectator only writes glowing reports about Abe and the SPD. Jenn argues that she prints the truth and Melinda laughs. She suggests Abe worry about maintaining his own candidacy instead of tearing her down.

At Salem Inn, Eve and Jack watch Jack’s video, promoting himself as a mayoral candidate. She reads that Melinda Trask is running against Abe and is frustrated that she’s challenging Abe on the same issues Jack is but won’t quit.

Brady goes to Chloe at Doug’s 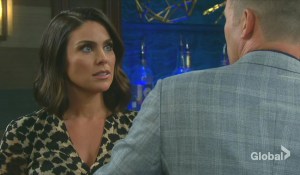 Place to tell her he’s the new CEO at Titan. Chloe’s happy for him. Brady is grateful for her friendship. She agrees he’s been her rock through everything. They share a tender moment.

At his apartment, Eric flashes to seeing Sarah in bed with Xander and smashes a coffee cup just as Rex appears, shocked that his usually “zen” brother would do that. He questions him but Eric refuses to answer. Rex asks for help on how to be patient for Sarah but Eric wants nothing to do with this, then offers his opinion that Sarah may never forgive him. Rex disagrees. He goes to see Sarah.

In her room at the Kiriakis mansion, Sarah dreams about trying

unsuccessfully to seduce Eric and wakes up with Xander again. She’s surprised to see him. He displays three condoms and asks for sex. Sarah says that was a drunken one-time thing. Xander tries seducing her and it almost works but she bats at his hand when he caresses her face. She throws him out and then flashes to arguing with Eric.

Xander wanders into Doug’s Place for tequila. Chloe says they’re not open so he asks for coffee. Chloe gets him one while Xander asks to join Brady’s team at Titan. Brady immediately says no. Xander presses him and Brady offers to hire him as janitor. Anger flashes on Xandy’s face. He reminds Brady he stole the thumb drive of Nicole’s confession and warns that he’ll find something else to hold over Brady.

Jack and Eve find Abe and Jenn in the square. Abe’s happy to see Jack until Eve blurts that he’s running against Abe. Abe’s not happy. Jenn tells Jack he can’t run against their friend. Eve rolls her eyes. It’s a free world! Jack thinks he can make a real difference. Jenn takes Jack aside to try to talk him out of running, saying his raping Kayla will not go over with the public especially in this age of Me Too. Plus, all of his other skeletons will come out of the closet. Is he prepared for that? She’s also worried about Eve’s part in this. Jack asks if she doesn’t think he is smart enough to see through Eve.

More: Days promo has someone kidnapped

Rex turns up at the Kiriakis mansion with flowers for Sarah. He sees Chloe, who wishes him luck before he heads up to Sarah’s room. Once there, he finds condoms on the floor. He takes off, giving Chloe the flowers on his way out.

Sarah arrives at Eric’s with his shirt. He doesn’t want it. She apologizes for sleeping with Xander, calling it a mistake. Can they get past it? Eric thinks she had sex with Xander to piss him off. Sarah asks him to stop making this about him. He presses her and she admits she wanted to hurt him. She holds his hand and is about to make an admission when Rex arrives. He sees the expressions on their faces and asks what’s going on.

Outside the pub, Trask ends a call with her campaign manager and tells her sister she plans on winning. She just needs Haley to stay away from her. Haley’s hurt. 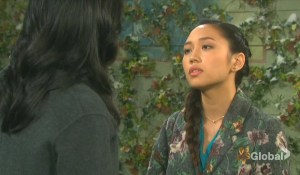 Melinda apologizes and asks how she is. She’s living with JJ. Trask hopes she didn’t tell him anything. She didn’t but told Dr. Evans her secret. She swears she’ll never tell anyone else. She’d never hurt Mel. Melinda’s thankful. She leaves and JJ walks up and demands to know what that was about. He pushes her and she finally admits she’s a criminal. “I’m illegal,” she cries. She’s an undocumented immigrant. She runs off crying.

Sarah confesses something to Rex.

Chad and Stefan Voted Co-CEOs of...

Rex Kisses Sarah After She Agrees to...