Eric Finds Xander Naked With Sarah in Her Bed

Monday January 21, 2019: Gabi wants Kate to help with her revenge plot against Stefan, Rex explains the way he was feeling when he cheated on Sarah, and Victor makes Brady an offer.

It’s evening at the DiMera household, and Chad and Stefan take verbal shots at each other over the CEO position and Abigail.

At home, Abigail rocks Charlotte while she flashes to talking to Kate telling her to forgive Chad.

Coming out of Doug’s Place, Brady gets a call from Victor calling a truce. He wants to meet first thing in the morning. 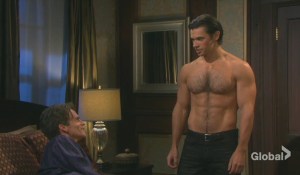 Back at the Kiriakis house, Leo rubs Xander’s neck, then climbs on top of “Mt Xander” and kisses him.

Outside the pub, Chloe calls Rex an idiot for telling Sarah he slept with her sister Noelle. Rex says it was worse than when she found out about Emily. He rushes to find her.

At Eric’s, he tries to stop Sarah from kissing him but she convinces him it’ll make the pain go away. They make out on his sofa.

It’s the next morning at the DiMera house when Abigail shows up with Charlotte. It’s Chad’s day with her. He forgot but thinks this is fine. He recalls having a strong connection when he first looked into her eyes. Stefan walks up as Chad says he still can’t believe she’s his. Stefan approaches and the men argue about who should rightfully be CEO of DiMera. Abigail refuses to allow Charlotte to stay in the house as long as Stefan’s there. Chad agrees to visit Charlotte at her mom’s house instead.

From her room at Salem Inn, 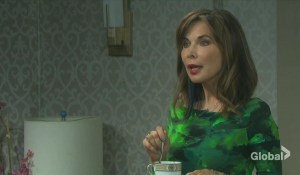 Kate reads about the DiMera brothers vying for control of DiMera Enterprises when Gabi arrives. She wants to discuss destroying Stefan. Kate’s not interested. She reveals she turned the DiMera Enterprises board down when they offered the CEO job to her and suggested they rehire Chad. Gabi reminds Kate that Stefan’s got her at the top of his hitlist. She’s shocked to learn Chad offered to give her Gabi Chic back, calling him very forgiving. Kate decides to help Gabi – for Chad.

Brady’s back at Doug’s Place drinking tea with Chloe. 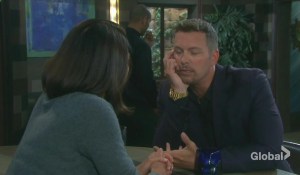 They wonder why Victor has summoned him. Chloe assumes it’s to hire him back as CEO.

Rex lets himself into Eric’s apartment. Shirtless Eric wanders out and Rex reveals he had an argument with Sarah and can’t find her. Eric admits she was with him last night but he’s not sure where she is now. Rex is sorry Eric was dragged into this mess. 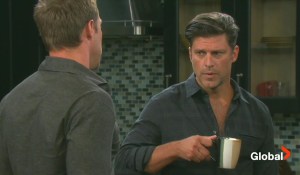 Rex knows he was an idiot but it wasn’t done on purpose. He felt like he didn’t deserve Sarah when it happened. “She was so hyper critical of me,” he says. He felt like he could never measure up and she was judging everything he did. Eric asks if he told her. He never did and his feelings festered. He felt unworthy. Eric has no empathy for him. Eric flashes to turning Sarah down. Rex goes to shower and Eric leaves a message for Sarah then takes off. Kate turns up, having heard from Roman that he returned. Rex fills her in on what he did.

Brady arrives at the Kiriakis house. He updates Vic on Tate and shows him photos. Victor wants him to return to Titan as CEO, and opens up about Xander’s thumb drive full of information on DiMera that Xander got from Eve. Eric arrives looking for Sarah. Vic tells him where her room is and Brady refuses Victor’s offer. Victor’s miffed – they’re family. Brady reminds Vic that as his family, he screwed him over by making Theresa look like a druggie. Victor misses Brady and sincerely wants to change things. “I need you. Titan is a mess and you’re its only hope.” Brady says this time things have to change. No pitting one Kiriakis against another. He’ll need a contract that expresses that. Victor agrees happily. Brady shakes his hand and gives his uncle a half smile. Victor laughs that Xander will be in for a big surprise once he wakes up. Upstairs, Leo awakens alone. “Xandy?” Leo calls. Meanwhile, Eric goes to Sarah’s room and finds Xander and Sarah in bed together, naked.

Gabi runs into Abigail at the square. Abby asks if Gabs is there to drug her tea. Gabi says no and brings up Chad vs. Stefan as CEO of DiMera Enterprises. Abs comments that they have one thing in common.

Eric is angered over Sarah’s betrayal.

Rex Had Sex With Sarah's Sister,...