Ben & Ciara Break up and She Leaves for South Africa 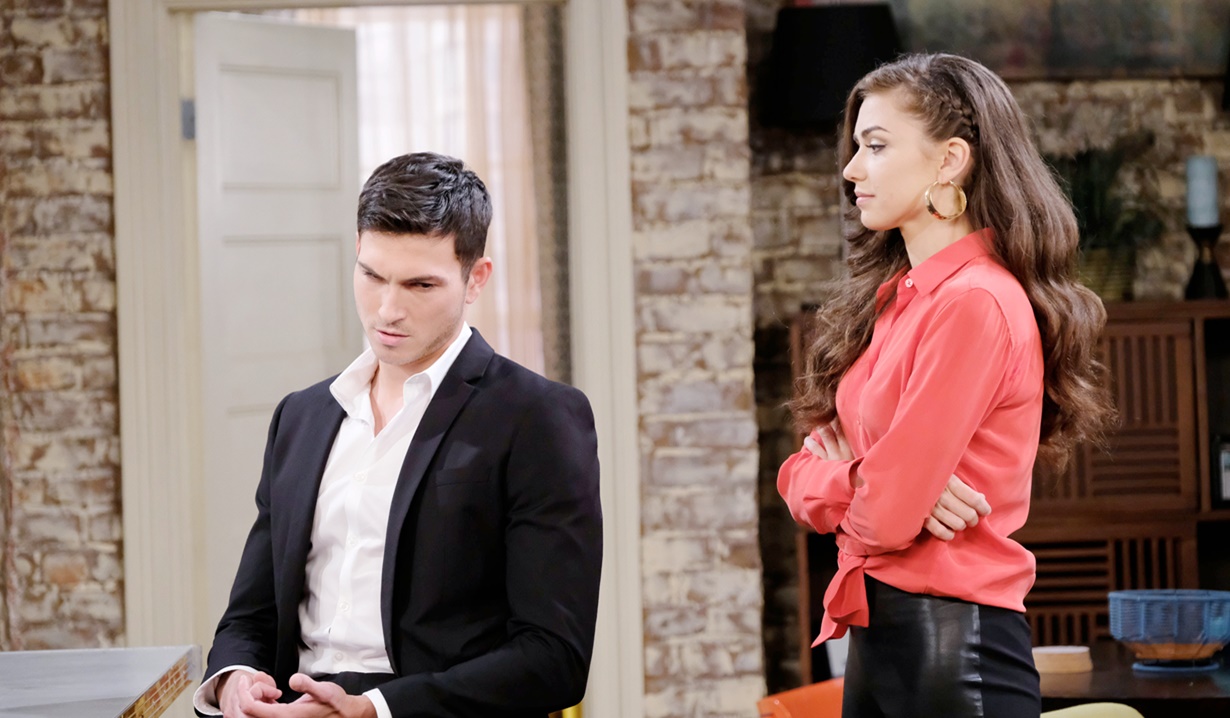 At the hospital, JJ, on the phone with Chad, agrees to help him win back Abigail. He disconnects as Haley appears. She agreed to do counseling with Dr. Evans after Kayla threatened to suspend her – she’ll tell Evans whatever she needs to hear. 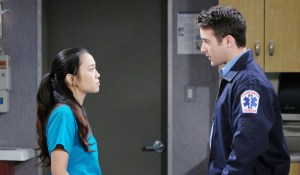 JJ asks, “Including what you’re keeping from Kayla?” Haley learns JJ heard her on the phone earlier and calls him a pain in the ass. He argues he’s a good friend. She worries he has an agenda, but JJ denies it. Haley’s about to open up when JJ is called away. Haley’s phone rings – she warns the caller to stop pressuring her. JJ returns and finds Haley gone.

The doorbell rings at the Horton house and Abigail reluctantly admits D.A. Trask, (played by Laura Kai Chen), after she threatens to keep coming back. Abigail reiterates she won’t press charges against Gabi, but the woman pushes. Abigail maintains that she and Gabi have hurt one another enough – it’s over. Trask warns if she won’t help her prosecute Gabi, she’ll prosecute Chad instead. for kidnapping. Abigail knows she’d need her testimony and won’t put her children’s father behind bars. Trask’s frustrated. Abby knows this is about Trask’s career, not justice, and orders her out.

In the square, Chloe admires Brady’s photos of Tate. They’re hugging when Eve appears and snarks about their coziness. Chloe leaves, and Eve needles Brady, who insists they’re just friends. Brady reveals he just saw Tate – he doesn’t like being separated from him. Eve reiterates she did what she did to try and help him. She muses that Jack appreciates her help and is probably waiting with wine. Brady confronts Eve about trying to punish Jennifer – Jack should be reuniting with his family. Eve accuses him of being jealous. Brady denies it – this is about her not being the “Eve he lo…knows.” He recalls how good she was with Tate, who remembers her kindness and drew her as a mermaid. Eve notes kindness got her nowhere – she wants to win. Brady wonders if conning an amnesiac into being with her is winning and advises, “You’re better than this.” Eve says they can’t all be mermaids and heads to see Jack. 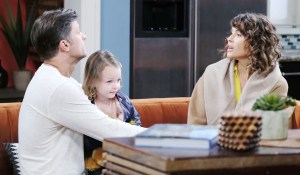 Sarah, with Holly, surprises Eric with a visit to his apartment. Eric’s thrilled to see the little girl. Sarah admits she didn’t mention the ‘field trip’ to Maggie or Chloe, but left a note. Eric shares a photo of Nicole with Holly and says her mommy loved her so much and is watching her from heaven. When Holly’s napping, Sarah admires how Eric talked to Holly. Eric worries about her learning the truth one day. Sarah thinks she’ll understand – he’s a good man who made a terrible mistake.

At the loft, Ben’s come bearing roses, but Ciara confronts him about conspiring with Claire. Ben did it because he thought it was the only way he’d have a chance with her. 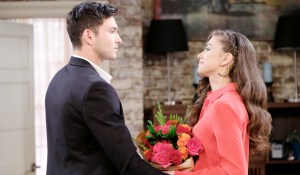 Ciara feels manipulated – she’d expect it from Claire but not from him. Ben suspects she’s just looking for an excuse to end things. Ciara tells him to just go – Stefan probably has more people for him to kidnap. Ben reveals Stefan was arrested and Chad fired him. Ciara so badly wanted Ben to quit; to make the right choice – but it was done for him – he doesn’t care about her. Ben rants that he was crazy to think they could be together – everyone will always think the worst of him, including her. She blurts, “Ben…” He exits. After, Ciara, wearing her leather jacket and looking ready to leave, is on the phone – she’s booked a flight to South Africa and is coming for a visit.

At Doug’s Place, Julie takes a call from Chad, and agrees to try to convince Abigail to show up tonight. Chloe arrives and learns Julie canceled all the reservations – she feels left out of the loop. Later, Brady arrives and tells Chloe about his run-in with Eve. Chloe guesses Eve can’t allow herself to be vulnerable. Brady invites Chloe to dinner, but she takes a raincheck. She calls Maggie and learns Holly’s not there.

Julie arrives at the Horton house and asks Abigail to get ready for a special event at the restaurant – it’s a surprise. Abigail guesses Chad’s behind it and refuses. Julie admits it and tries to guilt her into attending. She speaks about love and forgiveness, and Abigail heads upstairs. She returns dressed for dinner, and Julie texts Chad.

At the DiMera mansion, Chad, on the phone, tells someone he has a few things to run by them for tonight. After, he receives Julie’s text, checks himself in the mirror, and heads out.

Ben sits, dejected, on a park bench, and flashes to kissing Ciara.

In the park, Haley is joined by a terse D.A. Trask, who asks about her meeting with Kayla Johnson and hopes she kept her mouth shut.

Chloe arrives at Eric’s place to get Holly, and confronts Sarah for taking the child without her permission. Sarah counters she’s her aunt. Eric declares they can’t keep doing this. He’s made a decision about Holly’s custody.

JJ discovers Haley’s connected to someone in Salem.

Leo Is Hot for Xander and Makes Him...

Haley Is Melinda Trask's Sister, but...