Leo Is Hot for Xander and Makes Him an Indecent Proposal

Wednesday January 9, 2019: Ben is surprised by Chad's decisions, Claire and Tripp share a touching moment, and Leo meets Xander and finds him sexy. 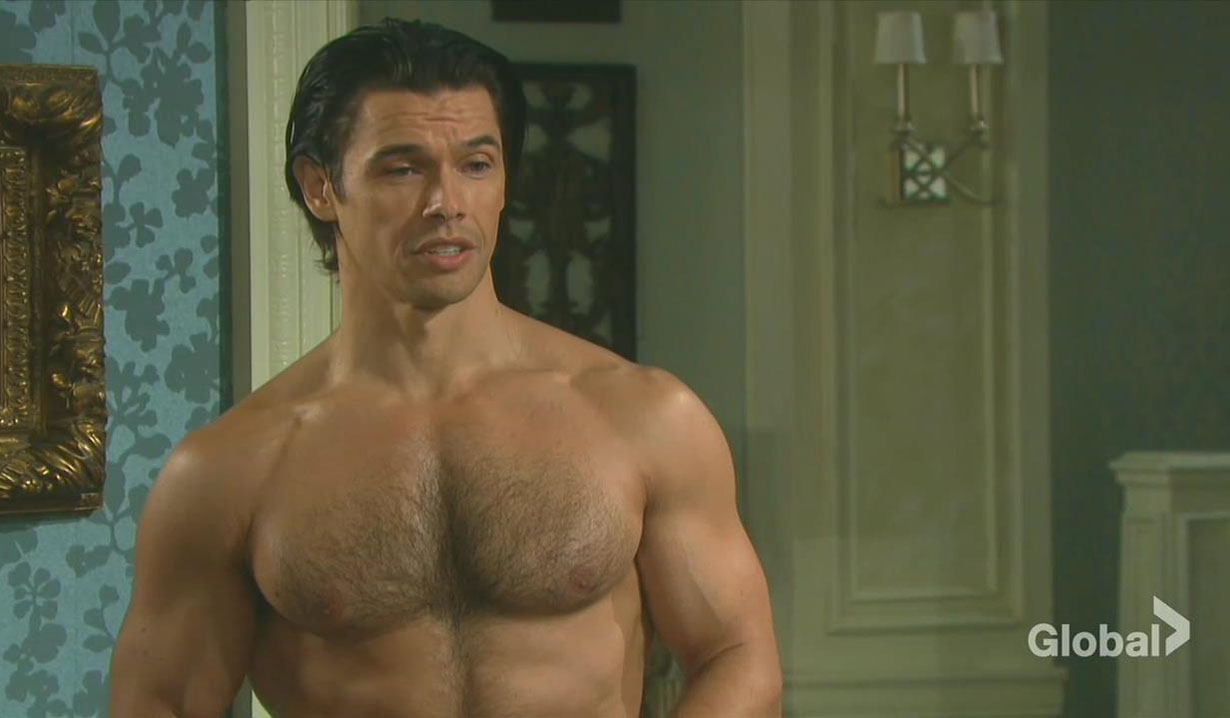 At the loft, Claire puts on puppy dog eyes and begs Tripp to let her take a selfie for her social media followers. He reluctantly allows it and they share a tender moment, staring into each other’s eyes. Ciara interrupts. She’s upset about Ben’s job and goes to her room, leaving Tripp to worry. When Tripp leaves, Claire hopes Ben doesn’t blow this for her.

At the DiMera mansion, Chad tells Ben that he works for him now because 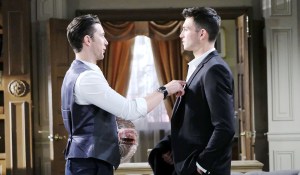 Stefan was arrested for treason. Ben’s shocked. He was about to quit because he had bad feelings about what he was doing. He knew it wouldn’t go over with Salemites. Chad fires him and then does another interview. He asks why Ben quit. Ben says his girlfriend Ciara didn’t like him kidnapping Gabi Hernandez and Ciara is more important to him than any job. Chad asks what Hope thinks about that. Ben says she hates it. Chad identifies. Ben’s working to change how people perceive him. Chad calls it a hard sale. Ben talks up being loyal and doing menial jobs but Chad has concerns about what Abigail would say. He suggests he let Ciara go to have a normal life. Then they’ll talk. He’ll pay him 2 weeks’ severance. Ben slumps out and Chad mutters about getting his family back.

JJ runs into Gabi at the square. She tries to run off but he stops her and tells her what she did to his sister, and to him was horrible. Gabi isn’t proud. She’s sorry and talks about rage that took over. JJ could have helped but Gabi was obsessed. JJ doesn’t want her excuses. She knows. She hated herself for what she did. JJ says Gabi wrecked their family and they may never fully recover. Gabi talks about feeling regret and shame but JJ thinks she kept it from him because she didn’t want him to stop her. She agrees then nods when he tells her she’ll be in a prison of her own making now. JJ’s not sure he can ever forgive her.

Sonny takes a call from Will at the Kiriakis mansion. Will has news on Leo’s mother. 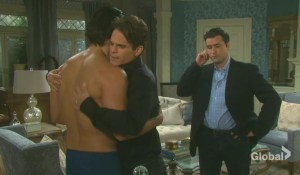 Sonny tries to disconnect, worried Leo would overhear and Leo pops his head in. “It’s too late, lover.” Sonny disconnects and Leo pouts that Sonny never looks at him lovingly the way he does when talking with Will. Sonny says that’s because Leo doesn’t trust him. In walks Speedo clad Xander and Leo practically drools. Sonny makes introductions. Xander smiles. He’s been looking forward to meeting him the guy who sued Sonny for sexual harassment. Leo hugs Xander and caresses his body, then runs to his room to get his bathing trunks on so he can go into the hot tub with Xander. Sonny thanks his cousin for saving him. He goes after Leo and Victor appears. He learned that Stefan is out at DiMera and Chad replaced him as CEO so he doesn’t want to work with Xander. Leo runs down in his swimsuit and eavesdrops as Xander asks to be CEO again and is refused. Vic wants to see the rest of the intel before he even considers Xander. Vic goes and Leo appears. Xander is impressed at how Leo became “The Real House Husband of Salem” in a night. Xander saw the video footage. Leo grins. Xander asks what Leo has over Sonny. Leo might tell him if he gets something in return. Leo runs his hands down Xander’s chest and Xander stops him. Leo’s married to his cousin and besides, it’s not his thing. Leo asks if he’s heard of “gay for pay.”

More: All My Children alum in Hallmark’s Winterfest movie

Will slouches into the pub. Roman can see Will’s upset and they ponder how to make Leo disappear. Sonny arrives and whispers that he got away for a bit when his cousin distracted Leo. They discuss Leo’s Achilles Heel – his mother. They agree to meet at the square later. Will’s spirits are lifted. Later, Tripp arrives. Roman talks to him about keeping an eye on Ciara, especially since she’s involved with Ben.

Back at the loft, Claire leaves a message for Ben to fix his relationship with Ciara. She reminds him that if it weren’t for their deal, he wouldn’t be with Ciara at all. Ciara walks up and questions her deal. When push comes to shove, Claire admits they fought to break up Ciara and Tripp. Ciara’s pissed. Ben shows up and Claire gives them space before Ciara drops the bomb on Ben that she knows he and Claire conspired against her and Tripp.

Sonny meets Will at the park. They kiss passionately and talk about tracking Leo’s mother down. They agree Will can search the Salem Spectator database and maybe ask John for help.

At the hospital, JJ takes Chad’s call. He needs help in winning Abby back.

JJ realizes Haley has a secret.

Ben & Ciara Break up and She Leaves...