Tuesday January 8, 2019: Rafe is surprised that Hope asked Ted for a favor, Ciara talks to Abigail about Ben's wellbeing, and Gabi faces her kidnapper. 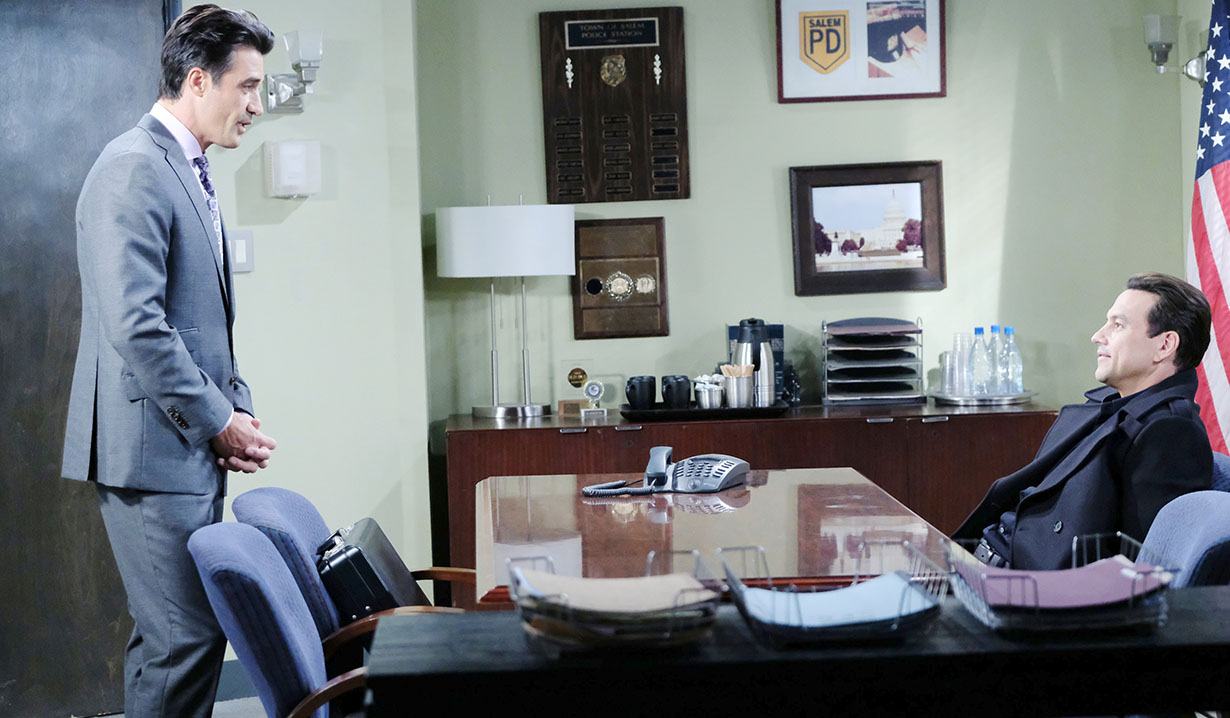 Ted finds Hope in her office at SPD. She lets him know Stefan’s been arrested. She wants Ted to represent him. Ted’s astounded. Stefan held him captive for months. Hope reminds him she kept him safe in the cabin. It’s time to return the favor. Ted tried to do that but couldn’t get a confession out of Ben Weston. Hope alludes to Stefan wanting to kidnap Ted next. Angry, Ted says he told her Stefan wouldn’t let this go. Hope thinks if Ted represents him, Stefan will owe him. Ted pushes and Hope reveals this will help her get Ben Weston out of her kid’s life. Ted can ask Stefan to work with him on this. In the interrogation room, Stefan refuses to talk without his lawyer. Rafe says nobody’s coming. DiMera is doing damage control because of Stefan’s arrest. Stefan smirks and says he has an unexpected supporter in Hope. Rafe scoffs at that until Stefan tells him about Rafe’s wife’s deal to give 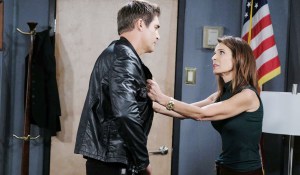 her Ben Weston. Stefan gloats, knowing Rafe had no idea. Later, Rafe heads to Hope’s office and sees Ted holding Hope’s hand in his as he agrees, “I’ll do it for you.” Ted goes and Rafe and Hope get into a fight over Hope using “this scum” to get to Ben Weston. Hope insists she’s doing it so Ben and Stefan wind up in prison. Meanwhile, Ted visits Stefan and shocks him by offering to represent him. He pleads his case and Stefan agrees to it.

Ciara visits Abigail and Charlotte at Jenn’s. Ciara’s hopeful Abs and Chad can work things out but Abigail says that won’t happen. Abby talks about Stefan hiring “that psychopath” as security. Ciara looks away and Abigail tells her cousin how dangerous Ben is. Ciara confesses she’s dating Ben, which shocks Abigail. Abby tells Ciara he’s a serial killer. Ciara knows what he did but in the cabin, he was kind, caring and gentle and even Marlena says he’s not dangerous. Abigail cautions Ciara not to get close to Ben. He’s sick. Ciara says he was mentally ill but he beat it. She thinks Abigail should understand that considering she was sick and did awful things. Abigail 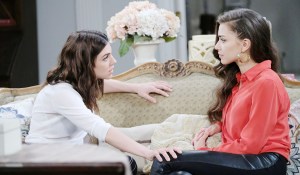 understands Ciara’s perspective but doesn’t agree that there’s any commonality between her and Ben. Abby wants her to be careful. Why choose someone with this history when he could be triggered at any moment? Being around Stefan could bring Ben’s darkness out. Ciara thinks that may be happening. She talks about the kidnapping and worries if she stays with him that it’ll make her complicit and a traitor to women. Abby thinks it’s good she’s thinking about this and urges her to walk away.

At Doug’s Place, Chad confides in Julie that Abigail is shutting him out. Julie advises not to give up. She’s on his side. Kate steps up. “So am I,” she says. 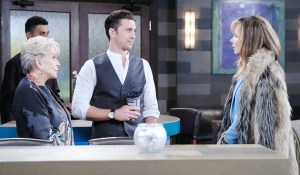 Chad doesn’t want to talk to her. Julie gets in Kate’s face before leaving them alone and Kate lets Chad know that Stefan was arrested for espionage. Chad’s interest is piqued so Kate explains further. The DiMera board has voted to remove him as CEO and put Kate back in. Kate refused Mr. Chin and suggested Chad take it. Chad refuses her, thinking she’s easing her own guilty conscience. Kate tells him he can work for DiMera again and live in the mansion with Abigail and the kids. It’s his legacy. Chad remembers the last time she said this to him, he put his father’s ring on his finger and went down a dark road. He takes off the ring. Kate thinks he should show everyone he can have success with integrity.

Ben comes upon Gabi at the park. 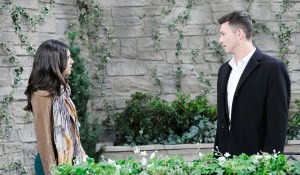 She jumps and tells him to go away. He won’t hurt her. He only wanted to get her from one place to another. Gabi stops him and reminds him he left her with Stefan to do with what he wanted. Did he think Stefan wanted to have a tea party with her? Ben asks what happened and learns that he tied her up and threatened to burn her with a hot poker. Ben regrets kidnapping her and apologizes. Gabi doesn’t think he’s that sorry if he is still working for the man. He tells her Stefan was the only person who would hire him. He can’t quit, even if Ciara wants him to. Gabi’s shocked he’s dating Ciara and hopes she has the sense to dump him. She leaves and Ben flashes to Ciara being close to ending things. Ben knows what he has to do… 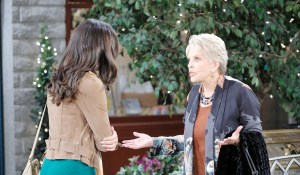 Gabi bumps into Julie in the square. Julie can’t believe SPD dropped the charges against her. Gabi boasts that Abby let it go. Julie threatens to go to the DA so Gabi threatens to keep her mouth shut permanently.

Ben goes to the darkened DiMera manse and sees someone at the piano. He thinks it’s Stefan and quits work. Chad gets up. He shares that he’s the new CEO and Ben works for him.

JJ gets into it with Gabi.

Leo is hot for Xander.

Jack Learns He Raped Kayla While...

Leo Is Hot for Xander and Makes Him...