Jack Learns He Raped Kayla While They Were Married

Monday January 7, 2019: Ciara is angry that Ben kidnapped Gabi, Jack learns about his past with Kayla, and Xander wants a job from Victor. 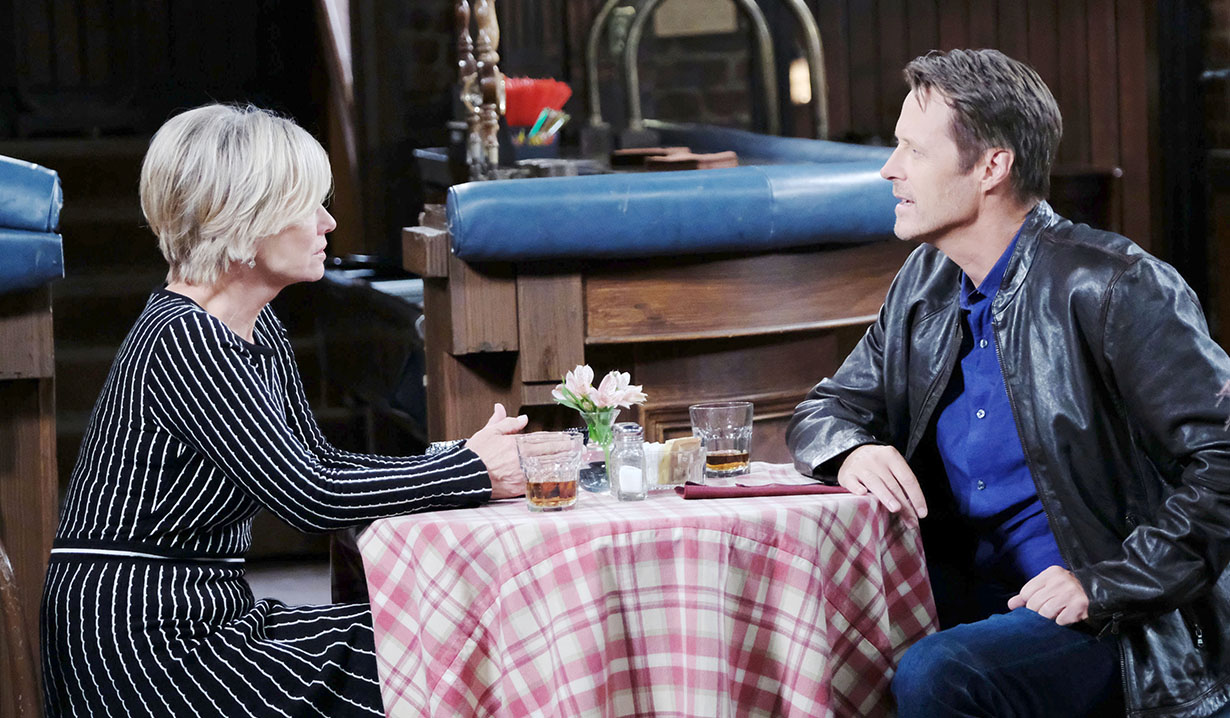 At the pub, Roman and Kayla are thrilled to learn Stefan was busted for setting Steve up. Roman wants to celebrate but Kay wants to wait until Steve’s home and forgives her. Roman knows Steve already has. They discuss Jack’s return and how Kay put their terrible history behind her. Roman goes to the kitchen.

Rafe tells Stefan that he is arrested for espionage. He reads him his rights as they head out of the DiMera mansion.

At the loft, Ben refuses to answer when Hope questions if he kidnapped Gabi. Ben wants his lawyer. Ciara asks why her mother isn’t arresting him. Ben calls Gabi an unreliable witness but Hope lets Ciara know that Gabi’s not lying. “There’s nothing reformed about him.” Hope begs her kid to see things her way and dump Ben then takes off. Ciara asks for the truth. Ben tells her he did it and she has a conniption. “If a man is willing to do this to a woman, I start thinking what else would he do?” She’s experienced pain at a man’s hands. Ben barks that he’d never…Ciara says it was a violent act. Ben yells, “I didn’t hurt her.” Ciara asks what’s next. Ben replies that he’s mostly doing security and asks her to trust that he won’t “cross the line.” Ciara asks where that line is. He kidnapped a woman and left her to be hurt by his boss. How could Ciara turn her back on this? It’d be like she was going along with it. Ben doesn’t want to lose her. Ciara needs time to think.

At the Kiriakis compound, Victor bemoans putting a DiMera in charge at Titan. 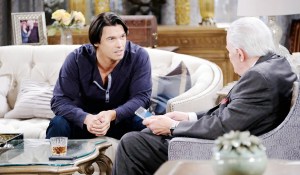 “It’s like putting a fox in charge of a hen-house,” he gripes on a call. Once he disconnects, Xander walks in. “Even I could have told you that,” he says. He gets himself a drink while a surprised Victor admits he was hoping Xander suffered the same fate as Nicole Walker. “Deep down I knew you’d survive. Cockroaches always do.” Xander wants to be welcomed back into the family. Vic reminds him he’s a fugitive for shooting Marlena Evans. Xander shrugs. There’s no proof but he has a flash drive that will save Titan. Vic’s unimpressed so Xander shows him what’s on the drive. Victor is suddenly impressed. It’s a way to ruin DiMera Enterprises. Xander wants to be the new CEO of Titan. Victor again reminds him he’s a fugitive and offers money but Xander wants power and respect. He goes to his room.

At Jennifer’s, she and Maggie discuss Jack’s return. Jennifer needs answers, knowing that time is a luxury they don’t have with Eve hovering. Maggie vows to help. She goes and Jenn hears the news about Stefan and calls a reporter to get on it.

At Salem Inn, Jack and Eve make out until Jack flashes to Jennifer’s kiss and pushes Eve away. He’s sorry. Eve keeps kissing him but he stops her. He can’t do this. Eve doesn’t care. She keeps kissing him and seducing him. He’s confused and needs answers. He runs off with Eve panicking about whether he’s off to see Jennifer.

At SPD, Hope’s shocked to see Stefan in the interrogation room. 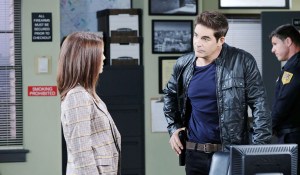 Rafe tells her about the espionage charges and asks where she’s been. She tells him about going to Ciara and Ben to tell them she knows Ben kidnapped Gabi. Rafe takes a call from FBI and Hope sneaks in to see Stefan. She offers to help him if he’ll in turn assist her in taking Weston down. Stefan refuses.

Jack arrives at the pub and Kayla calls his name. She’s shocked to see him in person, even though she knew he was alive. She introduces herself and Jack’s looking forward to meeting Steve. Jack asks about their relationship. Kay lets him know that they had a good one at the time of his death but before she married Steve, she and Jack were married. She admits she had an affair with Steve and when Jack found out, he raped her. Jack’s mouth drops open. He’s sorry. Kayla says they dealt with it years ago and he proved he’s not that man anymore, thanks to Jennifer’s love.

Eve arrives at Jennifer’s looking for Jack. Jennifer’s happy to note that she looks afraid and wonders what happened. She feels confident Jack will find his way home to her. Eve implies that she and Jack made love but Jennifer assumes he was repulsed by her which is why he took off. They argue.

Maggie returns home to tell Victor about her visit with Jenn. She says Xander’s alive and is the one who handed Jack to Eve. “So that’s where he got it,” Vic says, calling Xander slippery. He tells Maggie about their unwanted houseguest. Maggie looks pained when Xander walks in clad in a towel and shirtless with an invitation to Maggie to go skinny dipping.

Rafe Attacks Stefan Then Arrests Him...