Julie Awakens for Christmas Eve at the Horton House 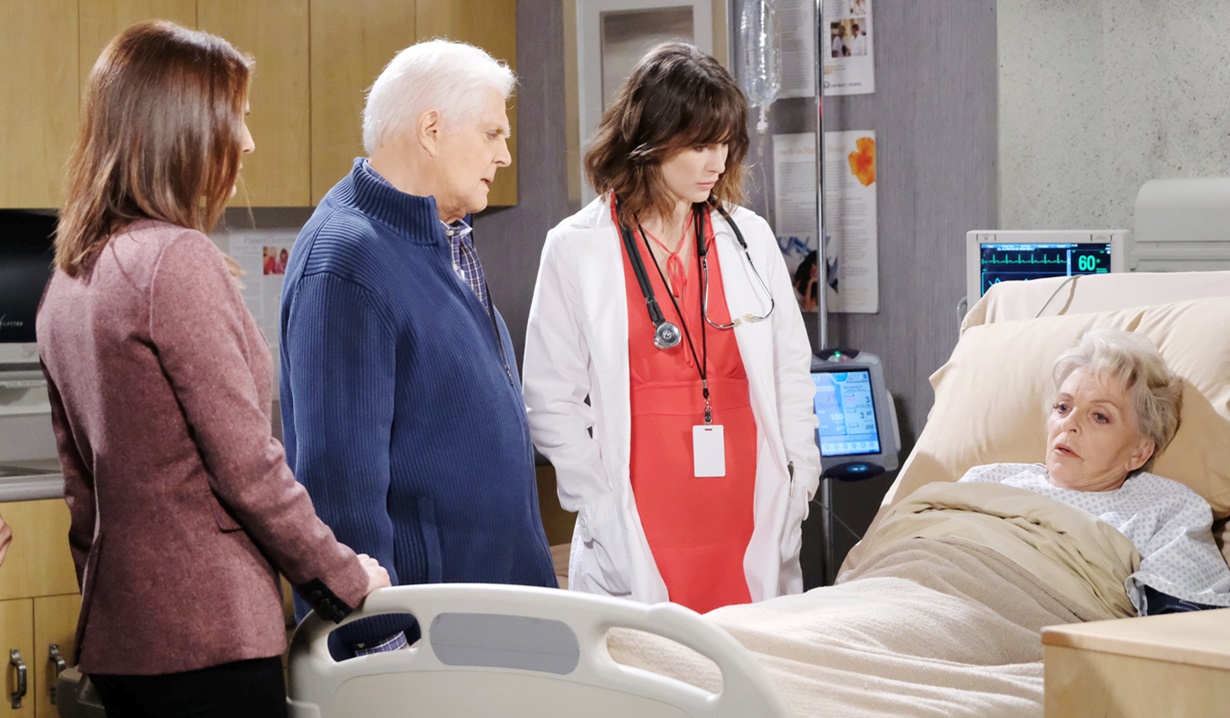 In Julie’s hospital room, Jennifer watches as Doug tells his wife it’s Christmas – she has to come back to him; she’s his life. Julie awakens and says, “You are my life too, Darling.” In the waiting area, Rafe, with Hope, admires Sarah’s hospital credentials. Jennifer rushes up to say Julie’s awake. Sarah examines Julie and is optimistic for a full recovery. Hope asks if she remembers what happened. Julie replies that Gabi Hernandez happened and recalls searching for proof that she set Abigail up.

At the loft, Ciara breaks the news to Claire that Horton Christmas Eve is cancelled because Grandma 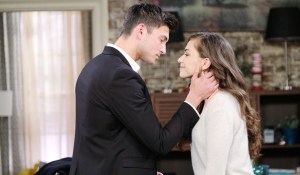 Julie’s still hospitalized. Ben arrives to see Ciara, and Claire explains she’s spending Christmas with Tripp and Kayla. Ciara hopes she has fun. After Claire’s gone, Ciara opens Ben’s gift – it’s a ‘guardian’ bell to ward off evil spirits while on her bike. They decide to go ice-skating, but Hope calls to say Julie’s awake and wants the Christmas Eve tradition to go on. Ciara has other plans, but Ben whispers she should go.

At the Kiriakis mansion, Chad startles Gabi and wishes her a Merry Christmas Eve and asks what she’s holding. She claims the paper’s a Christmas wish list, but Chad wonders why he heard her say she wouldn’t want it traced back to her. Gabi covers and Chad buys her explanation. They discuss Leo and Sonny. 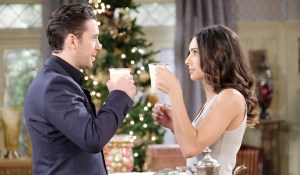 Gabi’s thinking about moving into her mom’s old house and invites Chad and Thomas to live there too. Rafe arrives and announces Julie woke up but can’t remember anything that occurred after searching her room. Later, Chad tells Gabi she’s sorry for everything’s she’s lost, for everything Abigail… Gabi interrupts and reassures him. Chad accepts her earlier invitation. Gabi’s eyes widen. Gabi notices a gift for Abigail under the tree and Chad muses he got it when he thought they’d be together, but she’s with Stefan and nothing will be the same again. In a moment alone, Gabi throws the DNA papers into the fireplace and burns them…

In the DiMera mansion, Abigail lets Stefan open a gift early – it’s divorce papers. She intones, “Merry Christmas you son-of-a-bitch,” as she takes off the wig and reveals Gabby’s been gone for a long time and 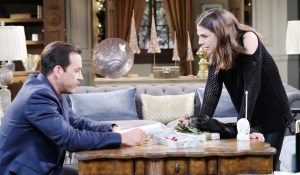 is never coming back. Stefan protests that what they had was real; they had a child together. Abigail shouts, “There is no us!” She was only pretending until she could get a divorce and now it’s over. Stefan hollers that she can’t just walk away with their daughter. She replies, “Watch me,” and exits. When she’s ready and waiting for a cab, Stefan threatens to sue for custody. Ben arrives as she’s leaving. Abigail, shocked, learns he’s the head of security. Stefan explains she’s been playing him. Later, Stefan informs Ben he won’t give up on her, and sits and stews angrily over the divorce papers.

In the hospital, Julie’s frustrated that her mind is blank after Gabi finding her in her room – she wants to know if she pushed her down the staircase. Doug suggests she had a dizzy spell. Hope asks what she was expecting to find, but Julie can’t remember.

At the Horton house, Maggie and Jennifer welcome Lani, and tell her JJ won’t be there today – he’s at the hospital with a woman whose life he saved. Rafe and Hope canoodle nearby, and she apologizes again for Ted. Hope then tells Jennifer that Ciara had other plans – probably with Ben – she hopes she hasn’t changed her mind. Ciara soon arrives, as does Claire, who got each other new ornaments. Hope whispers, “It’s a Christmas miracle. Thanks, Gran.” Everyone takes 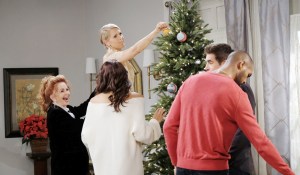 turns hanging their ornaments on the tree and snapping photos as the Christmas Eve tradition is carried out. Hope gifts Lani with an ornament for her baby, David Abraham, which she and Eli place on the tree. Jennifer hangs Jack and JJ’s ornaments as Abigail walks in with the baby carrier. Abigail explains it’s her – she had to fake her relapse – but quickly realizes her mother doesn’t believe her. She takes Jennifer to task for deciding things for her; she’s fine, she’s been fine, and now she’s free – she divorced Stefan. Abigail notices her ornament 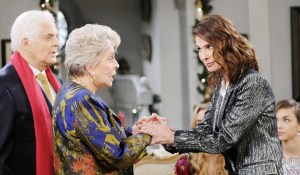 in Jennifer’s hand and puts it on the tree. She states, “I’m Abigail Deveraux and I make the decisions about my life.” Abigail wishes her mother a Merry Christmas and stalks out. Amid the stunned silence, Julie, with Doug, enters and shouts, “Merry Christmas!” She wonders if something’s wrong and Doug explains he called Kayla to release Julie after she wore him down. Everyone gathers around to give hugs. Julie and Doug hang their ornaments and Hope checks in with Jennifer who says her grandparents taught them to always have faith…she’s clinging to that so hard right now. They embrace.

At the end of this episode, the show had a photo of Frank Parker up, remembering the actor who played Shawn Brady who passed on.

Julie Remembers That Chad Is...