Tuesday December 25, 2018: Roman helps Will and Sonny see each other, Sheila has a gift for Abe, and Stefan needs proof for a shocking revelation. 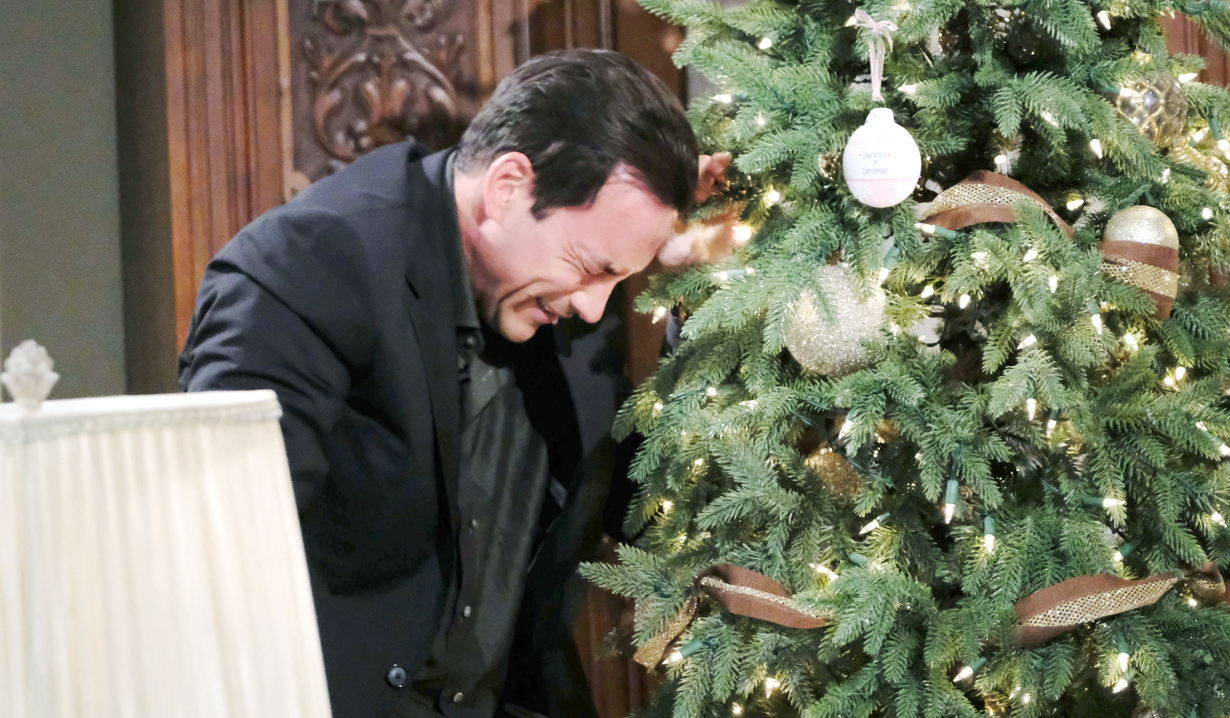 Sheila is writing Christmas cards in the park when Abe wanders by looking glum. 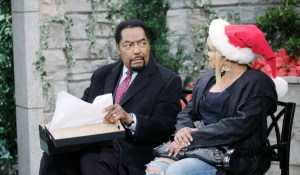 She gets him to open up, and he explains that his trip to DC with his girlfriend was a disaster. He tells her that there is too much distance between them. Sheila suggests he try harder if he still loves her. Sheila hands him some new shoes to replace the ones she ruined. He’s shocked to see they are sneakers. She tells him they are ‘fly’ and they need to work on his style issues. Abe tells her about Theo miraculously waking up from his coma last year. He asks her to the Christmas party with him. She’ll only go if he puts on the shoes.

At the pub, Roman tells Will and Kayla that they can head to the hospital. Kayla is in no hurry to go. Roman guesses she’s missing Steve. He and Will talk about Sonny marrying a jerk. Roman is sure that Will and Sonny can work things out. As Lucas calls his son, Kayla admits to Roman that she’s worried about Steve. She worries that her marriage can’t survive what she did. 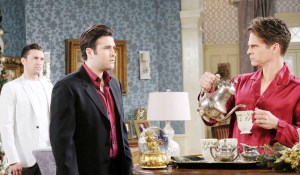 Thomas runs away from Leo at the Kiriakis mansion and into Chad and Sonny as they come through the front door. They aren’t impressed when Leo explains to them that he told Thomas that Santa isn’t real. Sonny and Chad wrap gifts. Sonny explains to his husband that he’s going to the pediatric ward party. Leo is keen to attend when he hears there will be reporters present. Gabi comes down after waking from dreams of a future family with Chad. She tells him that this will be the first year in their new tradition of spending every Christmas together. 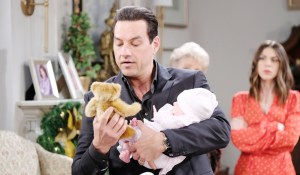 At the Horton house, Julie tells Abby how happy she is to see her home with Charlotte for the holidays. Abby apologizes for getting her to snoop on Gabi. They talk about how hard it has been for Abby to readjust and convince people that Gabi is a liar. Julie promises that they will be doing a victory dance when they take her down. Stefan shows up, demanding to see Charlotte. Abby is reluctant but lets him in. He picks up the little girl and gives her a stuffed animal. When he says that he will be taking the child home tonight, Abby is outraged. He pulls out papers from his lawyer, which triggers Julie’s memory. Suddenly, she recalls learning that Chad is really Charlotte’s father. She explains that Gabi swapped the paternity test results. She confronted Gabi about it, they fought, and Julie went down the stairs. Stefan refuses to accept this but it all makes sense to Abigail. He demands proof so she suggests they go to Kayla.

At the hospital, Leo isn’t happy to see that Will is there. In his Santa suit, Roman and Kayla escort some kids away as Gabi and Chad arrive. 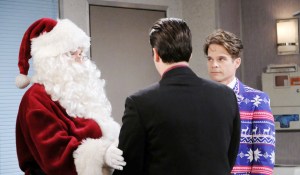 Will informs them that Abby divorced Stefan and came home. Leo drags Sonny in front of the children and reporters to make their debut and tell the children what heroes they are. Kayla reads The Christmas Story to the children as Abe and Sheila arrive. As Roman hands gifts out to the kids, Kay admires Abe’s new sneakers, and Sonny lectures Leo for his antics. Sheila checks on the newlyweds. Leo sticks his tongue down Sonny’s throat while Will sadly watches. Roman has an idea of how to help. Leo is eager to leave. Sonny thanks Kayla for the reading she did. She tells him that Roman wants to see him down the hall. When Sonny finds ‘Roman’ in his Santa suit, he’s pleasantly surprised to find it’s really Will. They kiss and Sonny tells him how much he misses him. Leo tracks him down to drag him home. Back down the hall, Sheila puts on some music and gets Abe and the kids to dance. 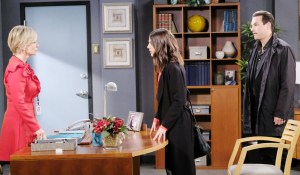 Meanwhile, Abby and Stefan arrive and go down to Kayla’s office with her. Abby explains that Gabi switched the paternity results. Kayla remembers that Gabi was in her office the day that she got the results. The results are still in the hospital database. Stefan remains in denial. Kayla looks up the results and confirms that the baby is Chad’s. Once they leave, Roman shows up with flowers and a note from Steve. He calls to wish Kayla Merry Christmas.

Chad and Gabi head home. He’s happy to see that Abby has been sticking up for herself. Gabi worries that she’ll show up with some crazy new story. When she goes upstairs to pack for their move, Abby arrives with Charlotte. She breaks the news that Charlotte is their daughter.

Stefan returns to Casa DiMera alone, picks up a gift he got for Charlotte, and then smashes it before bursting into tears.

At the end of today’s episode, Peggy McCay was remembered as playing Caroline Brady. McCay passed on this year.

Julie Awakens for Christmas Eve at...

Chad and Abigail Confront Gabi Over...

Selena Gomez Reveals She’s Officially ‘Over’ Being Hurt By Justin Bieber Breakup: That Chapter Is ‘Closed’