Gabi Moves to Smother Julie With a Pillow

Wednesday December 19, 2018: Leo baits Will, Sarah and Chloe tangle over Holly, and Claire and Ciara rush to the hospital. 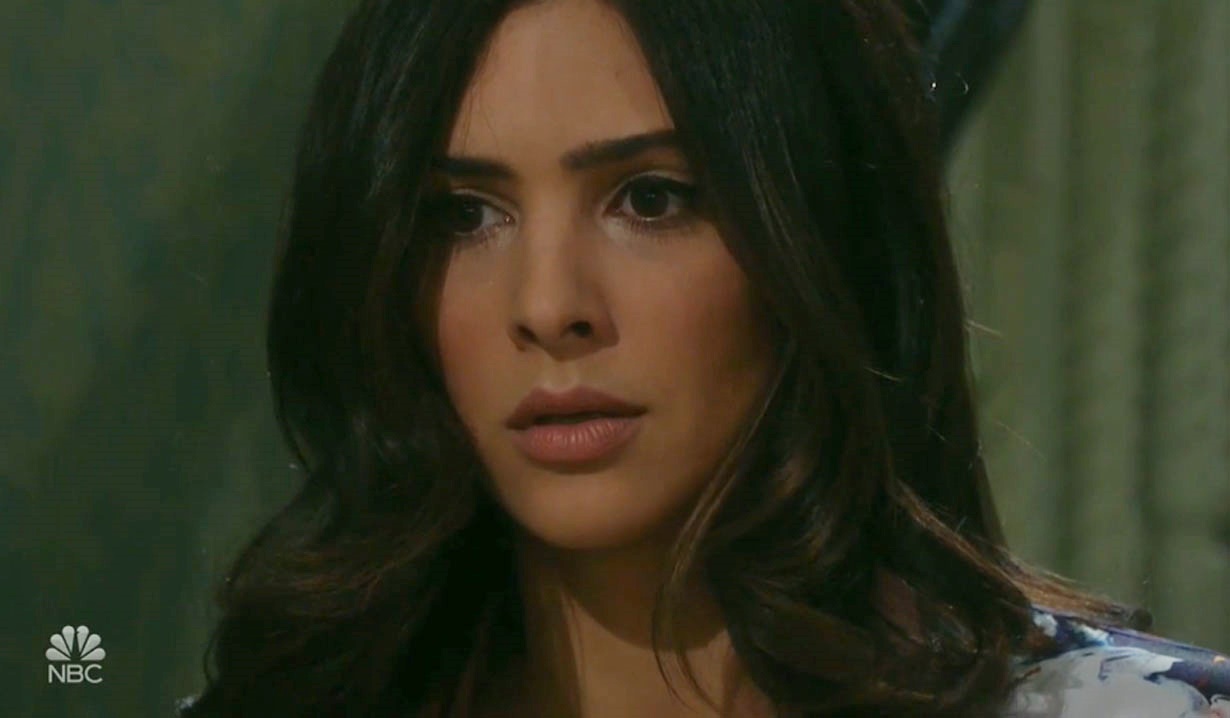 At Will’s apartment, Eric admits to Will that his plan to raise Holly has hit a little snag. They discuss Chloe having carried Holly and bonded with the child. Eric notes Nicole’s dying wish was for him to raise her. Will recalls the first time he held Arianna, and Eric muses that Holly is the closest thing he has to the woman he loves. He signs for the apartment. Talk turns to Sonny marrying Leo. Will understands why he had to do it and complains about Victor insisting Sonny treat the marriage as real.

At Doug’s Place, Sarah remarks that Chloe’s concern for Julie is because she’s a decent person…which is why she knows she’ll do right by Holly. She insists Nicole wanted Eric to raise Holly. Chloe argues Nicole said that while distressed. Sarah counters Chloe would have no problem with it if she hadn’t got that letter. Chloe intends to honor the letter, and questions this being Sarah’s business. Sarah pleads Eric’s case again, and turns nastier, bringing up Chloe’s past transgressions. She decrees that Eric would be a far better influence on Holly than Chloe could ever be. They heatedly exchange insults as Eric appears. Chloe announces she’s more convinced than ever that Holly belongs with her – she’ll get a lawyer if she needs to. Eric reveals he found a place for him and the child to live and he’ll make it happen.

At the hospital, Eli, sitting by Julie’s bed, tells Lani that Doug was there all night. He adds that Kayla and her team are doing everything they can. A beeper sounds and Lani goes for a nurse.

At the Kiriakis mansion, Leo sneaks into Sonny’s bed and Sonny demands he get out; he’ll never have sex with him. Leo reminds him what’s at stake and warns that he has needs. He also tells Sonny he won’t tolerate him seeing Will behind his back. Meanwhile, Gabi has a nightmare about Julie’s fall down the stairs and Eli and Lani arriving to place her under arrest. As Sonny arrives with Arianna to witness the arrest, 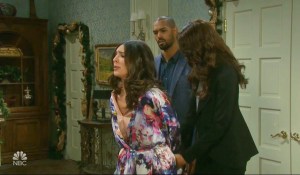 Gabi awakens, gasping. Sonny hears her and provides reassurance before suggesting they have breakfast with Arianna. Gabi agrees, but remains shaken. Downstairs, Sonny informs Leo he’s not welcome at breakfast. Leo demands Sonny’s credit card to go shopping. Elsewhere, the doorbell rings and Gabi opens the door to Eli and Lani, who want her official statement. Gabi concedes Julie hates her and went looking through her things to back up Abigail’s story. Eli doesn’t buy Gabi’s contention that Julie merely walked out of the room when Gabi appeared. Gabi shrugs that she must have slipped and fell down the stairs – she didn’t see it happen. After, Gabi joins Arianna and Sonny to enthuse about Christmas, she learns the girl just wants her mommy not to go away anymore. After Gabi reassures her daughter, she tells Sonny she has something to take care of. She tells herself she’ll make sure Arianna gets the one thing she asked for.

At the loft, Tripp is in the kitchen when Claire asks if Ciara will be shopping alone today or with Ben. Ciara notes it’s hard to buy a gift for someone when they’re with you. Tripp excuses himself. The girls argue when Claire accuses Ciara of being insensitive toward Tripp, and suggests she buy her boyfriend a necktie. Tripp reappears and announces that Julie’s in the hospital. Ciara takes off and Tripp tells Claire there was a fall down the stairs.

At Eric’s apartment, he advises Sarah to back off a little on Chloe. When he mentions Chicago, Sarah reveals that Kayla offered her a job at the hospital – she’s staying in Salem! Eric’s overjoyed, and feels Maggie must be thrilled. Sarah admits she hasn’t told her yet, and expresses a desire to help him with Holly. Eric reveals he signed the lease. They decide to bring Maggie there with Holly, which might change her mind.

At the hospital, Ciara reflects on Julie wanting the best for those she cares about – she needs her calling her out on her behavior. They all need her. Claire appears and says, “We can’t lose her.” 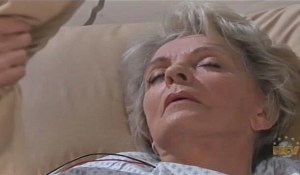 They embrace and say a prayer, promising to be kinder to each other and to themselves if Julie gets better. Later, Julie’s alone when Gabi enters the room, rants about not being able to have children thanks to crazy Abigail, and says she can’t have Julie waking up and telling what she knows. She won’t have her child feel abandoned again. Gabi picks up a pillow and moves to smother Julie.

In the square, Leo shows Will underwear he bought for his husband 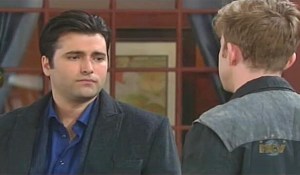 and baits that he was in Sonny’s bed this morning. Will knows Sonny would never sleep with him, but Leo says he had no choice. He smiles that they were both all in. Will punches him. Leo warns him not to be a homewrecker or he and Sonny will both suffer. Sonny appears. Leo threatens to file assault charges as Sonny clarifies he’s not sleeping with Leo, who snarks it’s only a matter of time. After, Ciara, Tripp, and Claire arrive in the square. Ciara tells them goodbye, and Claire worries to Tripp that they can’t lose Julie. He hugs her.

At the Kiriakis mansion, Sarah tells Eric that Holly is gone.

In the park, Chloe tells Holly that they, along with Parker will be such a happy family.

Abigail plots to sever her ties to Stefan.

Julie Fights for Her Life As Gabi...