Friday December 14, 2018: Abigail and Julie search for proof that Gabi gaslit Abby, Kayla wonders why Sarah's so invested in Eric's problems, and Eric vows not to give up on Holly. 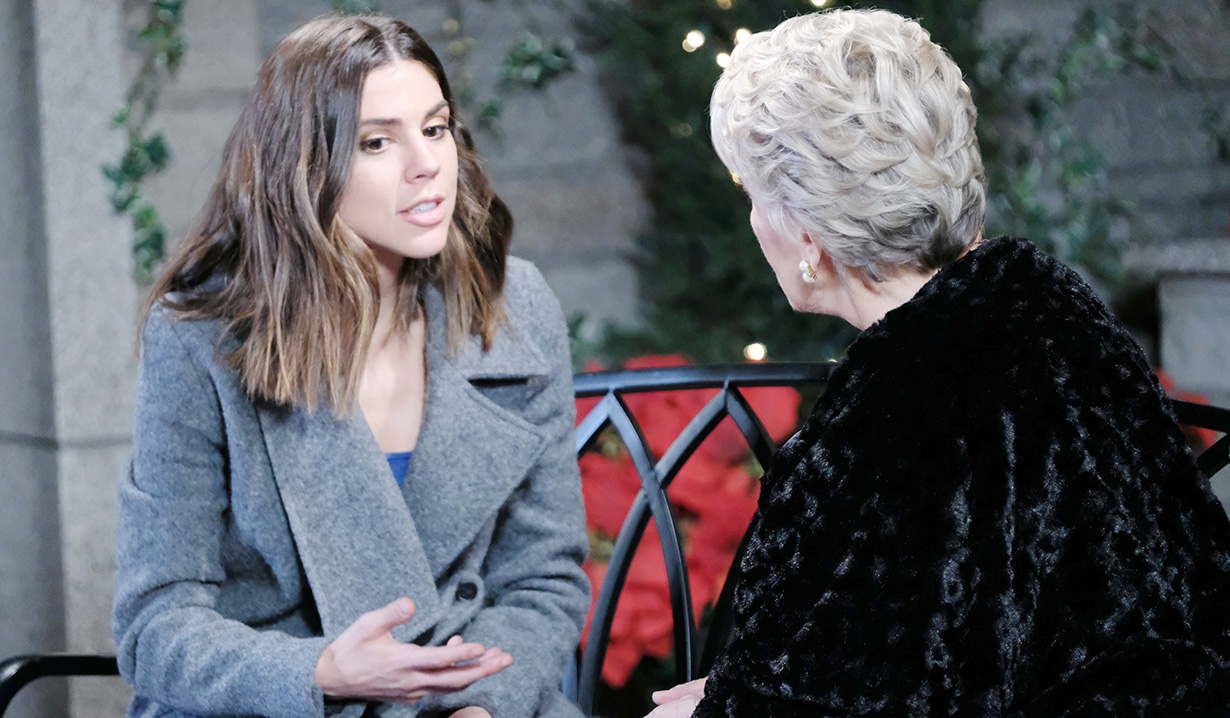 At the square, Sarah rips into Maggie for telling Eric that Chloe’s letter from Nicole states that Chloe is to raise Holly in the event of her death. Maggie retorts that she had no choice. “How could you do that to him, Mom?” Sarah asks, incredulous. As Sarah barks at her mother, Kayla pops up. She apologizes for intruding but Sarah wants to air her dirty laundry and asks what Kayla thinks of her mother ruining Eric’s chances for rebuilding his life. Maggie starts to cry. Kayla shrugs. It’s complicated. Kay sends Maggie off and says she heard about what happened with Rex. “No wonder you’re on edge,” she says. Sarah claims she’s not. Kay asks, “It’s Eric’s problem so why are you so invested?” Sarah’s just being a friend. She opens up about her call from Chicago and returning to work. Rex calls and Sarah reluctantly takes his call. Later, she calls him a jerk and disconnects, crying. He’s moving Mimi and the baby to Chicago to spend more time with his kid. Plus, he’s back at work. Sarah’s not sure what to do so Kayla says there’s a vacancy in her department at University. She’d be a perfect fit.

At Doug’s Place, Chloe reads Nicole’s letter again as Eric walks up. Chloe hands him the letter. He reads and flashes back to Maggie telling him about Nicole’s decision. Chloe apologizes, knowing he must feel awful. Eric says Nicole’s final wish was for him to raise Holly. Brady walks up and sides with Chloe, which angers Eric. He repeats that he and Nic were planning on being together and Nic asked him to raise Holly. He knows his brother heard him. Brady remembers but thinks Nicole was trying to save him by getting him out of the building. They argue. Eric won’t give up his case.

Gabi goes to Chad at the Kiriakis mansion. She’s sorry Stefan went back on their deal to keep Abigail committed. Chad alludes to have done something to ruin DiMera, which might hurt Titan too. No matter what, he thinks it’ll all have been worth it. Gabi can’t wait.

From the DiMera home, Abigail and Julie talk on the phone about their plan to be sure Gabi “gets exactly what she deserves.” They agree to meet and then Julie calls Gabi a “selfish, cold-hearted little witch,” as JJ walks up. Meanwhile, as Abigail leaves, Stefan stops her. He wants sex. Abby reminds him she just had a baby. She’ll find out how long they have to wait. Stefan gets a call and rushes off and Abby goes to meet Julie.

Back at Alice’s, JJ admits he overheard Julie trash talking Gabs. He defends Gabi. Julie’s sorry to have upset him.

Abigail meets Julie at the park. Julie’s happy she was able to 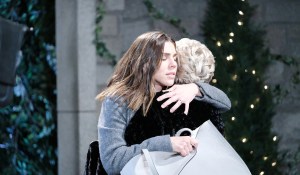 cut Stefan out of the bedroom. It buys them time to get proof that Gabs was gaslighting her. Abigail updates her on the many ways Gabi tried to make her think that she was going crazy and asks Julie to go to the Kiriakis house and snoop. Julie’s in. She tells Abs she thinks Kayla may have prescribed Gabi the sedatives she slipped into her tea. Abby agrees to snoop Kayla’s patient files. They embrace.

Stefan lets himself into the Kiriakis manse and asks Chad what he’s trying to pull. They talk business and Chad accuses him of not sticking to their deal to leave Abby committed. Stefan says technically he let Gabby out, not Abby. He taunts Chad that all bets are off since Gabby wants him as badly as he wants her. Chad asks him to do the right thing and commit her but Stefan won’t so Chad warns that he’ll ruin him. Chad goes and Stefan threatens to tell Chad that Gabi faked Abby fragmenting again. Gabi has to wonder if Abigail is playing him and if Gabby’s really not back. Later, Maggie catches Julie sneaking up the stairs and questions her. Julie invites her to see the Horton Christmas tree. Maggie will be there. They give air kisses and Julie leaves, then sneaks back in when Maggie leaves the foyer. Julie searches Gabi’s room and finds the real paternity results but before she can open them, Gabi catches her!

At the hospital, Abigail watches Kayla go off to check on a patient, and slips into her office to search Gabi’s patient file. Kay catches her!

At the square, Eric tells Sarah about his talk with Brady and says he won’t give up on Holly.

Stefan arrives home and finds a note from “Gabby,” saying she’s out for a walk.

Sonny and Leo Marry Amid Snarking...

Julie and Gabi's Brawl Ends When...