Sonny and Leo Marry Amid Snarking From Uncle Victor

Thursday December 13, 2018: Victor gets word of Sonny's wedding and tries to stop it, Kayla is forced to tell Tripp the truth about Steve, and Chloe shows Maggie Nicole's letter stating Chloe should raise Holly. 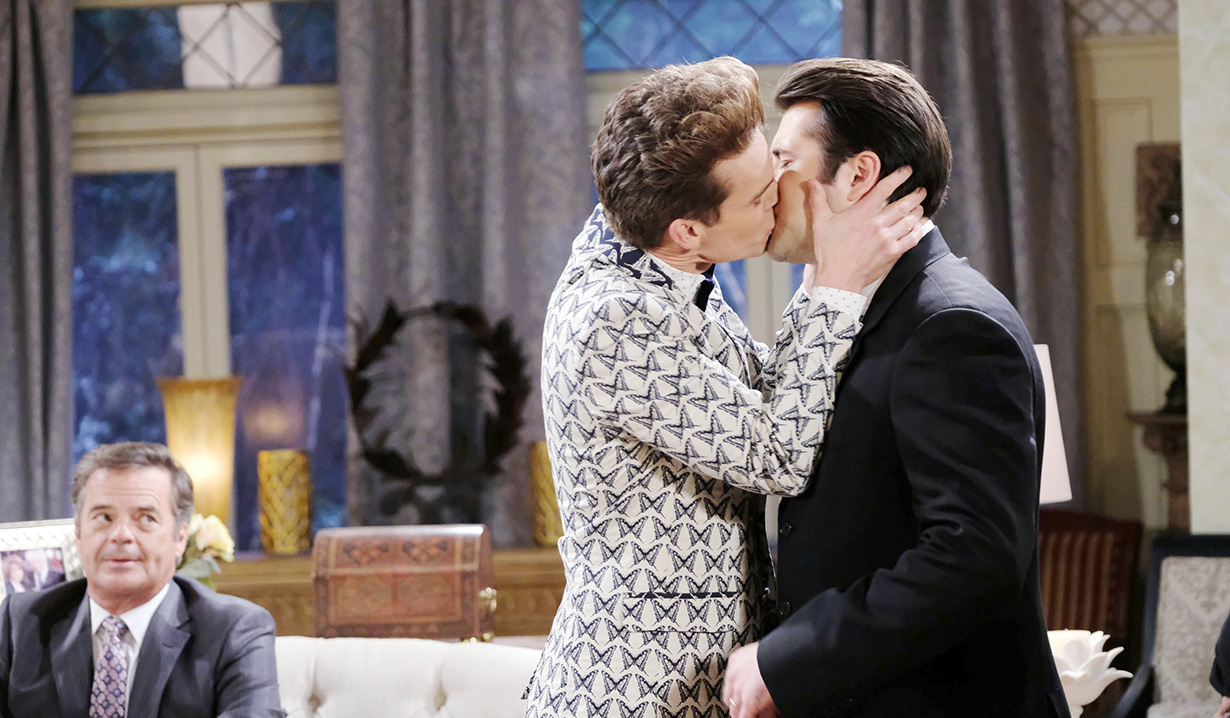 In the park, Kayla calls Steve. She’s almost in tears after hearing he was released but upset to learn he’s not returning home. He needs to fix this. “What about us? What about your son?” she asks as Tripp walks up. After Kayla has professed her love for Steve and disconnected, Tripp questions if his dad’s not returning from business. Kayla says Steve was supposed to check in. Tripp can see she’s upset and thinks she’s hiding something. She finally admits the real reason Steve left but asks him to keep it confidential. She informs him about the espionage charges and how Steve’s trying to help undo the damage. Kayla blames herself and confesses that she wonders if Steve’s staying away because he can’t forgive her. Tripp comforts his step-mom and reminds her she did this out of love. Kayla laments that she should have been honest.

At the pub, Eric and Sarah are thrilled Maggie is allowing Eric to raise Holly. 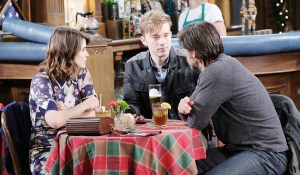 He thanks Sarah for all her help. Eric needs to move out of the pub. Sarah wants to write a list of the things he’ll need like a kiddie pool. Will arrives. He hugs Sarah and says he’s sorry about Rex. Eric heard he and Sonny reunited. Will clarifies that Sonny’s marrying Leo Stark who is blackmailing him. Will tells them he needs to unload his furnished two bedroom because it’s too expensive. Sarah asks if it has a yard. Eric and Sarah get excited. Will plans on moving back into his own room. He calls his landlord who lets Eric take over the lease. Will hands over the keys so they can see it. Once they’re gone, Will thinks about Sonny.

At Doug’s Place, Maggie reads Nicole’s letter which is dated a few months ago. 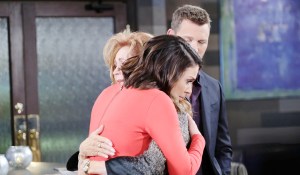 Chloe says Maggie would be an important part of Holly’s life. Maggie doesn’t doubt it but she already gave her blessing to Eric to raise Holly since it was Nicole’s verbal wishes. Chloe’s sorry but the letter trumps that. Maggie’s had concerns about Eric but Sarah convinced him Holly would help Eric put his grief behind him. Later, Maggie and Chloe hug. Brady thinks Maggie made the right decision (editing issue since we never saw her say yes). Maggie will break the news to Eric. Chloe feels bad for Eric and wonders how she’ll deal with childcare. Brady says she has Eric, Sarah, Maggie and him.

A door slams during Leo and Sonny’s wedding ceremony. In walks Victor, who demands to know what’s going on. “I thought Sonny wanted to be with that twit, Will Horton?” Sheila says, “I guess he traded up.” Leo is touched. He formally introduces himself 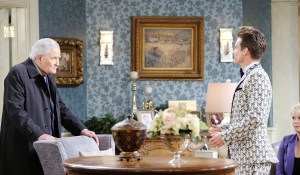 to Victor, who is furious. “He’s marrying the bastard that tried to destroy this family?” Sheila wants to get the show on the road. It’ll cost them overtime. Victor kicks her out and she and Leo go discuss her bonus in the foyer while Sonny repeats the blackmail story to Victor. “Lesson number one. When you kill somebody, make sure they are actually dead.” Sheila and Leo return and Vic tells them to get this over with. Sheila continues the ceremony but her cue cards get messed up. Victor snarks about Sheila being a terrible officiant. “What Arianne wasn’t available?” Sonny flashes to marrying Will and once vows are said and rings exchanged, Leo kisses his groom, though Sonny’s not into it. After, Leo and Sheila are out of the room when Victor tells Sonny to keep Leo happy so he doesn’t destroy their family. Justin agrees to make things look real. Vic says to stay away from Will.

In the square, Sarah and Eric dish on the sweet apartment. Sarah hopes this is the first step toward forgiving his brother. The head of the department of the hospital Sarah works at tells her he’ll replace her if she doesn’t get back to work. She disconnects and becomes emotional. She and Rex had plans together but now that they’re apart, she isn’t sure what to do and wonders if it’s time to leave Salem. Eric wants her to stay. Maggie walks up. They share the apartment news but Maggie has news of her own…

Sheila arrives at the pub and complains to Will that she officiated a wedding and the family didn’t give her a glass of champagne. He learns she just married Leo and Sonny and shakes his head.

Chloe Learns Nicole Wanted Her to...