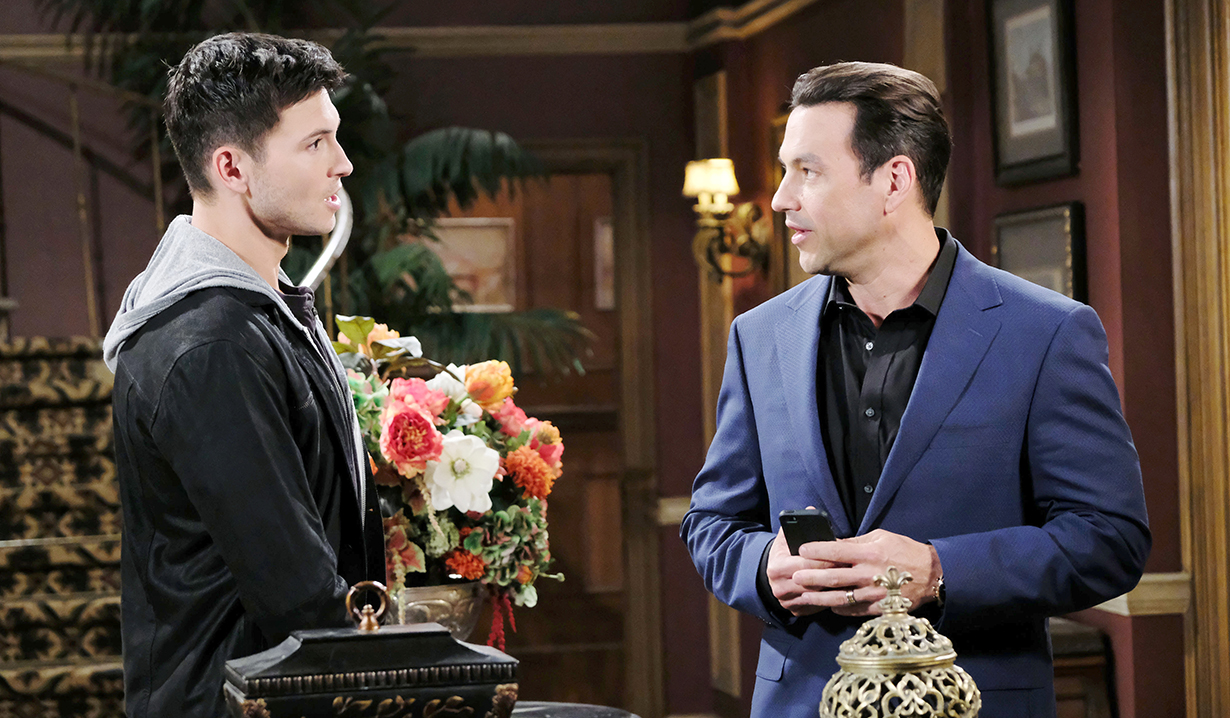 At the Kiriakis mansion, Sonny disconnects from a call with Will as Leo saunters in. Has Sonny made a decision about marrying him yet? “Do I call the wedding planner or do I call the cops?” Sonny yells that he won’t let a creep like Leo ruin his life with Will. Leo thinks Will is going to get bored again and start thinking about “dreamy Paul.” Sonny freaks and grabs Leo and shoves him up against the wall. Leo taunts him some more and Sonny lets him go.

At SPD, Rafe questions what case Hope was working on 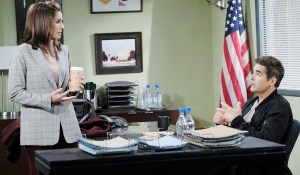 last night. She lies and flashes to telling Ted she’d protect him if he helped her put Ben away. Rafe offers to lend an ear but she refuses. They discuss Ben kissing Ciara and Hope yells, thinking he just stood there and allowed her kid to make out with “that serial killer.” Rafe shakes his head. He pulled Ben off of Ciara the moment he saw them together. But Ben didn’t force her. Hope is upset but Rafe calls Ciara a grown woman and they need to trust her – even when it comes to Ben.

More: Interviews with the stars of Days of our Lives

At Salem Inn, Kate lets Roman listen to the recording she made of Stefan, hoping it’s enough to put him away. Roman says it’s not. Will arrives and greets his grandpa and grandma. Roman’s happy to hear that he and Sonny reunited. Will looks a little green but thanks him. Roman goes and Will tells Kate Leo Stark is alive. Kate’s in shock and sorry. Will wants help in getting rid of him, assuming Ted is working with Leo. Kate thinks it’s possible but doesn’t know where Ted is. Will goes and Kate flashes to threatening Ted.

At the DiMera mansion, Stefan tells Stefano’s portrait that he has a beautiful granddaughter in Charlotte. His goon, Frank, (played by Gabriel Rodriguez), wanders in. He’s secured the house before the baby’s homecoming. Stefan fires him because he let Ted Laurent escape, Abigail was kidnapped on his watch, and he hasn’t given him any information on Steve Johnson.

At the square, Chad calls Bayview but can’t get an update on Abigail. Ben appears. He wants a job. He knows Bayview and can help Chad slip in to see Abigail. “I am good at my job and I can guaran-damn-tee you I can get you to Abigail.”

At Bayview, an orderly, (played by Ben Cain) goes to Abigail’s padded cell where Abigail, (played by Kate Mansi) is sitting underneath a blanket. He leaves a tray of food and goes. He returns later and asks her to eat so she can see her baby. She won’t if she doesn’t start eating. Abigail smashes the tray to the floor.

Ben arrives at Chez DiMera and stumbles across Frank. He flashes to knocking the man unconscious a few weeks back and when Frank asks if he knows him, Ben denies it. Frank takes off and Stefan appears. Ben inquires about a job. Stefan says he’s in luck. He just fired his security guy. But why should he give a job to the local Necktie Killer? Ben’s dependable, discrete and qualified for “specialized services.” He can incapacitate people easily and talks about putting someone in a sleeper hold. Stefan smiles and calls Ben a freak. He realizes he helped Chad to kidnap Abby. He threatens to call the cops. 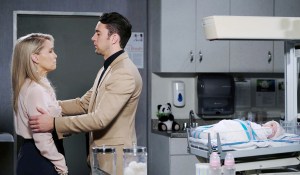 At the hospital, Chad is surprised to see Jennifer with Charlotte. Jenn says Stefan had a change of heart and is allowing family to visit. Chad apologizes to Jennifer. Jenn hates what he did and the way he did it but she knows it was out of love. Chad’s upset that Bayview won’t provide him updates on Abby. Jenn can’t help. Abby is in rough shape. Chad just wants to bring her photos of the baby. He begs and Jenn will talk to Abby’s psychiatrist. She goes to make the call as Chad takes photos of Charlotte and tells her she has the best mother in the world. He finds the baby cute and smiles at her as he takes more photos. Jenn returns. Chad has the green light to visit Abby. 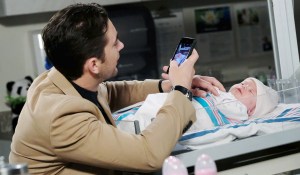 At the pub, Ciara tells her uncle Roman that Tripp broke up with her and shares that Tripp was the one who set Ben Weston up for the cabin arson. Roman’s shocked. Does Hope know? Ciara asks him not to say anything to anyone. Roman huffs. He asks her why she was there the other day with Ben Weston. When he learns that Ben wanted a job, Roman scoffs. As if they’d give him one. She admits she needs money. Roman offers her a job.

Will returns to the manse and tells Sonny he spoke to Kate about Ted and Leo. Leo pops in and reveals that Kate’s behind the whole blackmail. 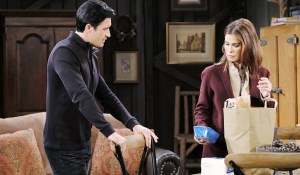 Hope arrives at the cabin on Smith Island with groceries for Ted.

Chad arrives at Bayview. The orderly lets him into Abby’s room. Abby removes her blanket… 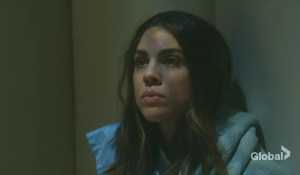 Leo Demands Sonny Marry Him or Do...

Abigail Kicks Chad Out of Her Room,...