Abigail’s Committed to Bayview After Giving Birth to Charlotte

Wednesday 14, 2018: Will gets a shock from Paul, Eric kicks Rex out of the Kiriakis mansion, Abigail is committed, and Gabi has second thoughts about what she has done to Abigail. 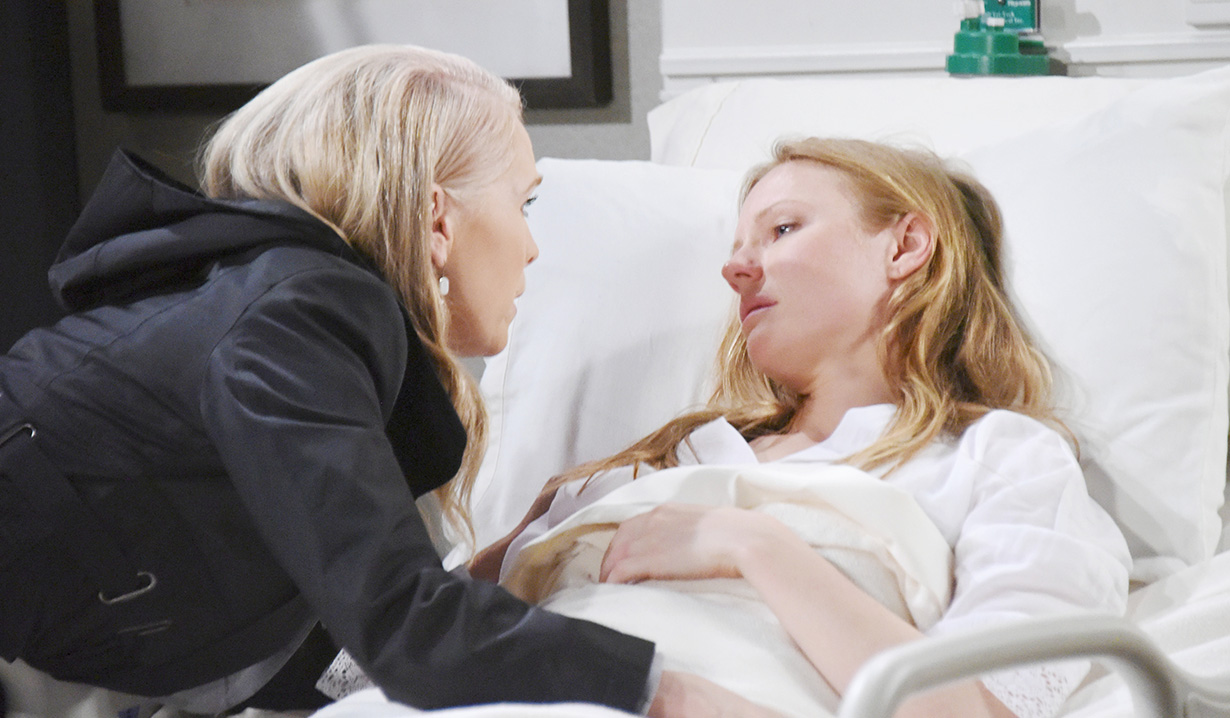 Brady stops Eric in the square. He was out getting a housewarming gift for Paul and got something for Holly. Eric refuses it and blames Brady for Nicole’s death.

Sarah walks into the Kiriakis mansion lounge which 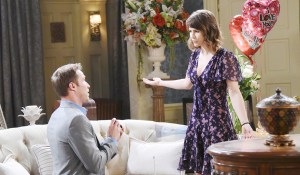 is filled with flowers and heart shaped balloons. Rex pops up, holds out a ring, and gets down on one knee. He made a huge mistake and asks for another chance. Sarah refuses. Flowers and balloons won’t make her forget he cheated. He swears there was only one other time that he cheated. Sarah doesn’t believe him. They argue about which of them is throwing away their relationship. Sarah screams at the top of her lungs until Eric runs in and asks them to quiet down. The kids are sleeping upstairs. Sarah explains in detail that Rex is trying to get her back after cheating on her. Eric 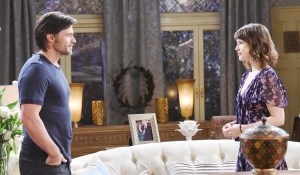 heard it from the foyer and asks Rex to leave before things escalate. Rex gives her space but won’t give up on their relationship. He goes, and Sarah apologizes for dragging Eric into this. Eric thinks she can come back from this but Sarah’s not sure how to trust Rex again. When Holly cries, Sarah goes to help him change a diaper, offering to be there for him and the baby. Later, Eric says he’s going to ask his mother for advice on how to tell Holly her mom is gone. Sarah asks Eric to take her out so she’s not around when Rex returns.

More: Days column, pondering if Rex is a deadbeat dad

At Paul and Will’s new apartment, Paul finds Will’s journal and contemplates reading it, wondering if Will really wants to be with him or if he feels obligated. Brady arrives with the gift and looks around. He approves. He asks after Will and they discuss how Eric blames him for Nicole’s death. Talk turns to physical therapy and Paul admits he feels stronger. Brady expected so and thinks it must be good having Will around for support. Paul admits it is but can’t help but wonder if Will really wants him or is in love with Sonny. Brady asks why he’s second guessing Will and Paul shares that Will seems distant. Brady reluctantly admits he’s not crazy for having misgivings. He admits he overheard Will profess to Sonny that he’s in love with him. Paul’s astonished. Brady knows Will cares for him and asks him to sit Will down to figure everything out. Paul thanks Brady for telling him but gives him the boot so he has time to process.

Outside Brady’s pub, Gabi throws out the Gabby wig. Will comes upon her. She says Arianna misses him. He’s been moving but will visit soon. Gabi thought he and Sonny would reconcile after he got his memory back. Will thought so too. He summarizes how he wanted Sonny until Paul became paralyzed. Gabi wishes she could be more like Will, who she deems a martyr. She discloses that she’s got a lot of anger inside about Abigail, who “always wins.” Gabs wants Abs to feel the pain she went through. Does that make her an awful person? Will says it makes her human. Gabi cries that she’s hurting people. Will says he’s no saint, either. All she can do is try to fix things. They hug and say I love yous and once Will goes, Gabi rummages through the trash and grabs the wig. She wonders if it’s still not too late to tell the truth for Abby, the baby and Chad’s sake.

At the cabin on Smith Island, 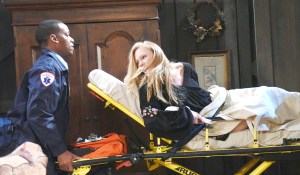 Abigail snuggles her baby girl, surprised her eyes are so similar to Chad’s. Must be wishful thinking, she murmurs. Outside, Chad calls Stefan. He tells him Abby had a baby girl. They’re both healthy. Stefan demands to know where they are. Chad has a proposition. Stefan agrees to whatever it is. Back inside, Abigail names her daughter. Chad returns and uncomfortably tells her help is on the way. Abs reveals her baby’s name is Charlotte. Chad smiles. He’s been trying to track down the first edition of Jane Eyre. 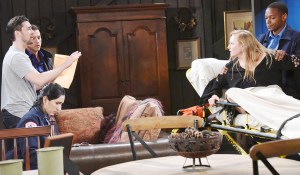 He says everything he’s done and will do is because he loves her. Paramedics arrive and then Stefan. Stefan signs papers and Abigail asks what’s going on. She becomes upset. Chad tells her Stefan is committing her. If he didn’t, Chad wouldn’t allow him to see his daughter. Abigail yells that Chad’s ruining her life. She begs for Charlotte, but Chad holds her, eyes shut tight. Abby’s taken away and Stefan holds Charlotte, telling her he’s her daddy.

Rex finds Brady at the square. They commiserate over losing the loves of their lives.

Will returns home and Paul says he’s moving out. 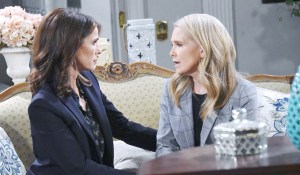 Gabi wanders into SPD. Hope tells her that Abby and Chad are okay, and the baby was born. Gabi’s surprised. Hope reveals Abby’s at Bayview.

At Bayview, Abby’s been sedated. She asks for her baby. Jenn rushes in.

Ben Grabs Wyatt After Learning He...