Friday November 9, 2018: Tripp and Claire share a secret, Hope and Rafe wonder if Tripp's the one who planted evidence, and Abigail's angry at Chad for kidnapping her. 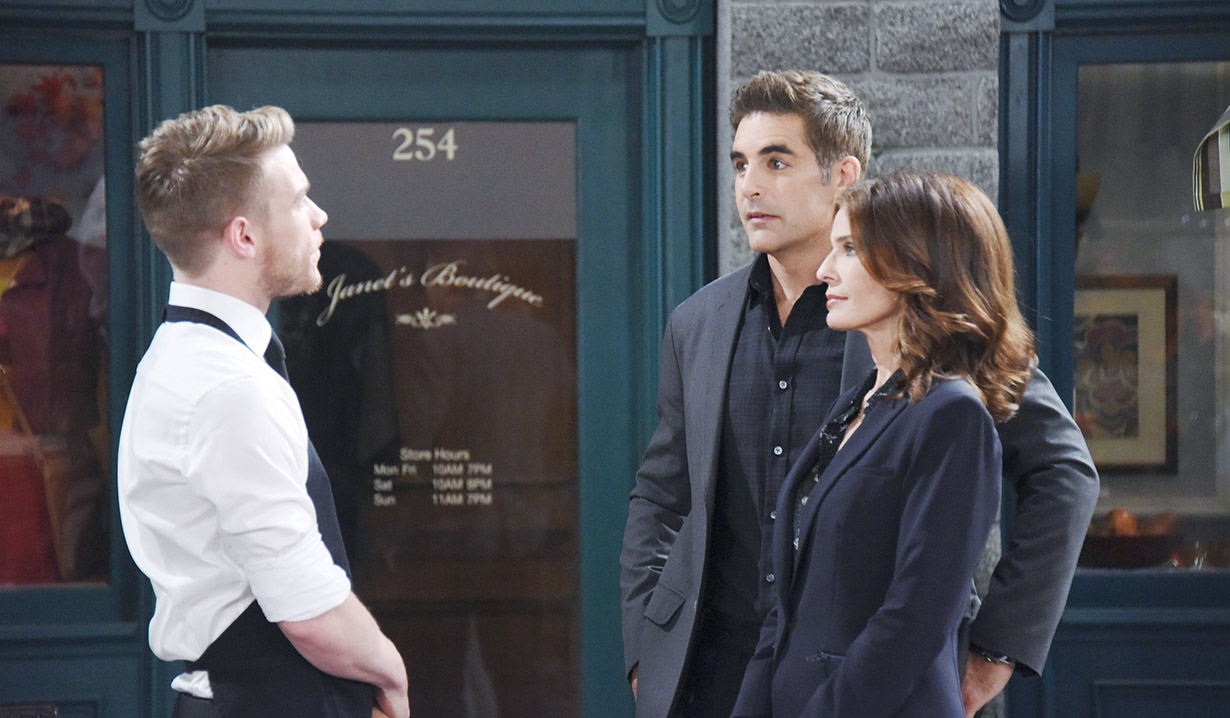 At SPD, Rafe and Hope call in the owner of the store who sold the can of accelerant that they found at the cabin. The store owner, Mr. Snyder, (played by James Calvert), tells them that Ben Weston’s not their guy. He leaves and Rafe and Hope gripe then wonder who planted the accelerant.

In bed with a sleeping Ciara at the loft, Tripp reads Claire’s text. Is he avoiding her? He flashes to her realizing he’s the one who planted the arson evidence at the cabin. Claire texts that they need to talk. Ciara awakens and he asks what she was doing with Ben, earlier. She flashes to almost kissing Ben and lies that nothing happened. Tripp’s not so sure. Ciara says she took Ben to the pub to get him a job but her uncle Roman wasn’t there. Tripp complain

s that she’s spending time with Ben when she told him she wanted to stay away from him? Ciara scoffs that it was Claire’s idea. Tripp says Claire called it Ciara’s idea. Ciara assumes Claire lied because she’s still into Tripp.

Stefan wakes up after being choked out by Ben and heads into the DiMera mansion. Kate wakes up from drinking the

drugged tea meant for Abigail. “That bitch,” Kate says, laughing when she realizes Abby switched their cups. Kate notices that Gabi’s been messaging her as Stefan appears and demands to know why she’s there and where his wife is. Kate explains she came to talk sense into Abigail and asks why he looks like something “the cat dragged in.” He explains how he was knocked out by someone Chad hired and that Chad kidnapped Abigail. Kate’s shocked. She flashes back, realizing it happened when she was asleep. She knows nothing but Stefan’s not convinced. He’ll get the truth somehow. He goes.

In some cabin, Abigail realizes she’s locked in with Chad.

She wants to go home and calls this kidnapping, while he calls it tough love. He’s expecting Laura to meet them there and promises she’ll have the best care for her baby and her mental health. Abs argues that there’s nothing wrong with her mental health and that Gabi’s gaslighting her. Abby’s angry that Chad doesn’t believe her. She tells him she has proof back home and fills him in on switching tea cups after believing Kate drugged her. Chad stammers while saying he doesn’t believe her but he loves her. She wants to know what it even means since she doesn’t think he’ll want to be with her and Stefan’s baby. Chad repeats he loves her and they can be together after she integrates. There’s still time he can accept this child as his own. Abby’s not so sure. She loves him but cries that if he loves her, he shouldn’t keep her against her will. Chad realizes she’s right and give her the keys to unlock the door. “Go.” Abs suddenly goes into labor.

and hands her money to cover the coffee she bought him, saying he’s done some odd jobs. Ben thinks Claire’s plan is already working.  He and Ciara almost kissed. They talk about Tripp and Ben calls the guy a boy scout until Claire reveals Tripp may have killed someone who was holding a gun to Ciara’s head.

Gabi stomps out of Doug’s Place and texts Kate again to order her to call her back. Gabi worries Kate was caught.

Gabi rushes into the DiMera mansion and demands Kate tell her what’s going on. Kate fills her in. Gabi’s horrified. How did Chad not find her? Kate calls it a good thing. Otherwise, they’d be sharing a jail cell. Kate wants out. Gabi begs her to keep helping but Kate tells her to clean up and goes.

At Mandalay, Tripp confronts Claire on lying about it being Ciara’s idea to get Ben a job. Clai

re brushes his concerns aside. She questions why he set Ben up. He did it because he wanted to lock up a guilty man. He lifted the print off a DVD Ben left behind. He swears her to secrecy.

At Doug’s Place, Ben notices Ciara having issues on her laptop and offers help. She asks why he’s there. He’s hoping to get a dishwasher job, saying he used to work there. Ciara says her grandparents own the place. They won’t give him a job. She clears the air about their moment yesterday and Ben gets it. She has a boyfriend but he wishes she didn’t.

Stefan arrives at SPD and reports,

“Chad DiMera had me knocked out and then kidnapped my wife.” Rafe and Hope are staggered that Abby married him. Stefan shares the story. He goes and Rafe assumes Chad’s just trying to protect Abby. Talk turns back to Ben and they decide to pay Tripp a visit.

More: Which soaps are on this Thanksgiving

Rafe and Hope find Tripp at the square and question him…

Claire helps Tripp with a cover up and Scott Shilstone returns as Wyatt.

John & Marlena Finally Marry in an...

Abigail and Chad Have a Baby Girl,...