John & Marlena Finally Marry in an Impromptu Ceremony at the Square

Thursday November 8, 2018: It's the 53rd Anniversary since Days of our Lives has been on the air. Check out the gallery of the party below. In a special episode, Susan and Sami come to an agreement before they leave Salem with EJ, John and Marlena get married, and Chad goes to extremes to get Abby back. 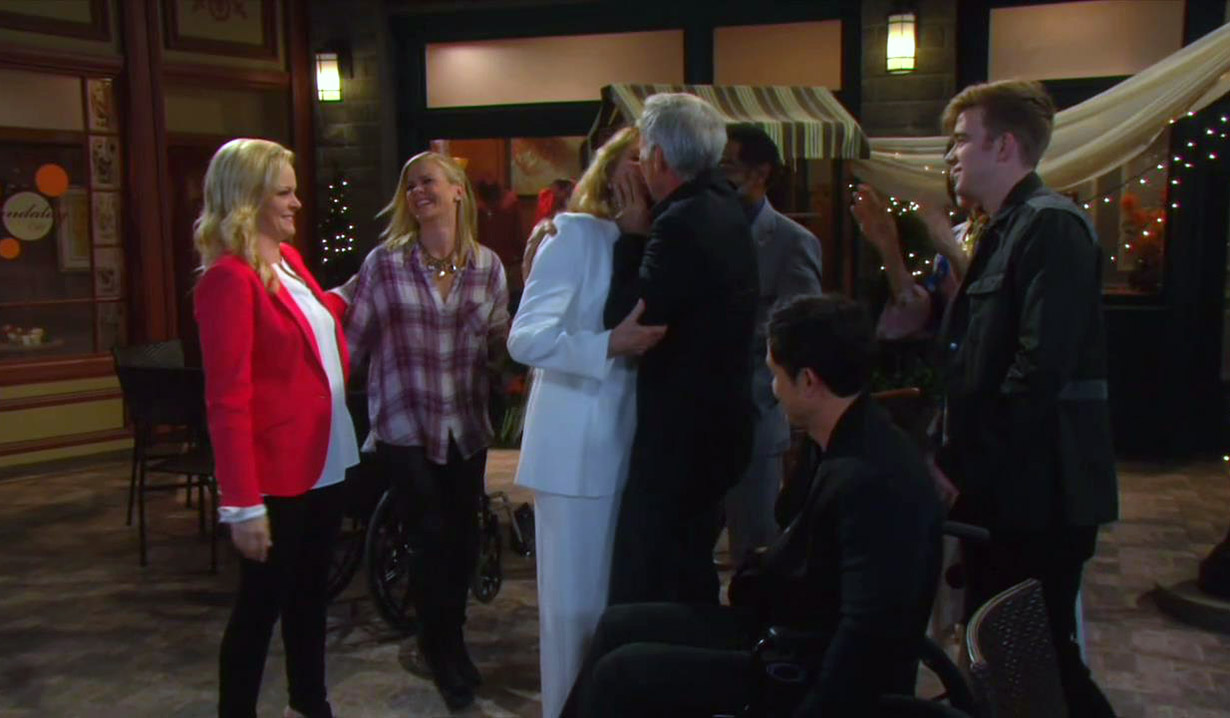 At the Kiriakis mansion, Ben asks why Chad is asking for his help after all he’s done to him and Abigail. Chad says it’ll take a monster to get Abby out of that house. Ben’s ruthless, smart, driven and effective.

“I still think you’re a monster but now you’re my monster.” Chad offers money. Ben agrees to do it as long as nobody dies. Chad grins. “We’ll see how it goes.” Gabi interrupts. Chad confesses he’s planning on getting Abby back. Gabi calls it a terrible idea. They go and she freaks out.

Kate shows up on Abigail’s doorstep. Abs grudgingly lets her in, suspicious when Kate agrees to tea in lieu of a martini. Kate says it’s time to end the marriage to Stefan. A goon named Frank (played by Gabriel Rodriguez), appears and tells Abby that Kate slipped in under his radar. Abby says it’s fine and shows him out. Once she’s gone, Kate drugs Abby’s tea.

At SPD, Abe tells Belle that John petitioned for an annulment to marry Hattie Adams. How did he not know he was marrying the two? Belle fills him in on details and says she was in the dark about it at the time too. They decide to throw a surprise wedding.

Will and Paul are happy to see John and Marlena at the hospital hub. Will tells them about Sami and Susan being at the morgue, their strange run-in with Susan and Will and John head down there. In the morgue, Susan wields a scalpel at Sami who assures her that she’s flying EJ to a facility in Italy that treats burn victims. Sami agrees to let Susan visit them in the clinic. They agree to stop being enemies. Susan puts the scalpel down and Sami is resistant but finally hugs Susan. Susan, John and Will return to the hub. John and Marlena leave and Belle appears. She invites them to the impromptu wedding. Meanwhile, Sami gets EJ settled in his room and Stefan visits. Sami blames Stefan for EJ getting burned. If he had turned Kristen in this wouldn’t have happened. She’s using the other half of the payment for EJ’s recovery. She asks how his marriage is to Chad’s “slutty ex-wife.” He says they’re raising a baby together. He learns they’re off to Italy and offers help. He goes.

Belle appears, asking for help with a surprise.

Chad arrives at the DiMera mansion and Frank won’t let him in. Ben chokes him out cold. Inside, Abby tells Kate her DID isn’t back. When Kate goes to make a call, Abby switches their tea cups. In the foyer, Kate gripes at Gabi for bothering her. She disconnects and turns off her cell then goes back to Abby, who says marrying Stefan was a big mistake. Kate sips her tea and Abby grins. Outside, Stefan catches Chad using his keys to get inside. Stefan yells for Frank and Ben rushes Stefan and chokes him out. Chad’s pleased. Inside, Kate passes out and Abby gets the door to Chad who plans on getting her out of there.

At the beautifully decorated square, Belle hands Abe the rings but hasn’t heard back from Brady or Eric. Susan, Abe, Will and Paul hope Sami can get John and Marlena there.

Back at the hospital, Sami tells John and her mom that she and Susan came to an agreement and Sami’s leaving tonight. She invites them to dinner at the square.

John and Marlena turn up at the square with Sami. They’re told Abe is marrying them. Thrilled, Marlena wants to marry him standing. She gets out of her wheelchair and Abe begins. “We are gathered here today to join John Black and Marlena Evans in matrimony. John says, “Abraham. I think Doc and I have said all the important stuff to each other already. And because of her suspect stamina, what do you say let’s get right to it.” The best man, Paul, gives John the ring. John says, “You know because of what’s happened the last time we tried this I have much more of an appreciation of what these vows mean so I John Black take you Marlena Evans as my lawfully wedded wife. To have and to hold from this day forward. For better. For worse. Richer or poorer. In sickness and in health. Until death do us part.” He kisses her hand and slips the ring on. Sami, as matron-of-honor, provides the ring for Marlena, who says, “Last time we were here in this place trying to get married, I got myself injured. You took care of me and all of our friends that were here, they saw me through. They saved my life. So this is not really just two people that love each other getting married. This is all of our family and friends being a big part of it. You know, I wanted to get married here because this is the place that the plaque for Tom and Alice was dedicated and they were a two people who showed me so much about what a marriage really is. Not because they didn’t have problems but because when they had problems and they worked them out, their marriage was even stronger after that. I want that for us. I want us to celebrate every day as though it were our first together. And I will delight in you all the days of our lives. She slips the ring on his finger and says, “I Marlena take you John to be my lawfully wedded husband to have and to hold from this day forward, for better, or worse, richer or poorer, in sickness and health, until death do us part.” Abe says, “With the power vested in me, I now pronounce you husband and wife.” Everyone cheers and they kiss and thank everyone. They delay the celebration and Susan gives Marbie the Marlena doll to Marlena. Sami hugs everyone goodbye.

At the end, Alice Horton reminisces about their first episode.

Chad does something drastic.

Claire gets the truth out of Tripp.

Chad Becomes Desperate and Turns to...

Ben's Name Is Cleared As Not Having...