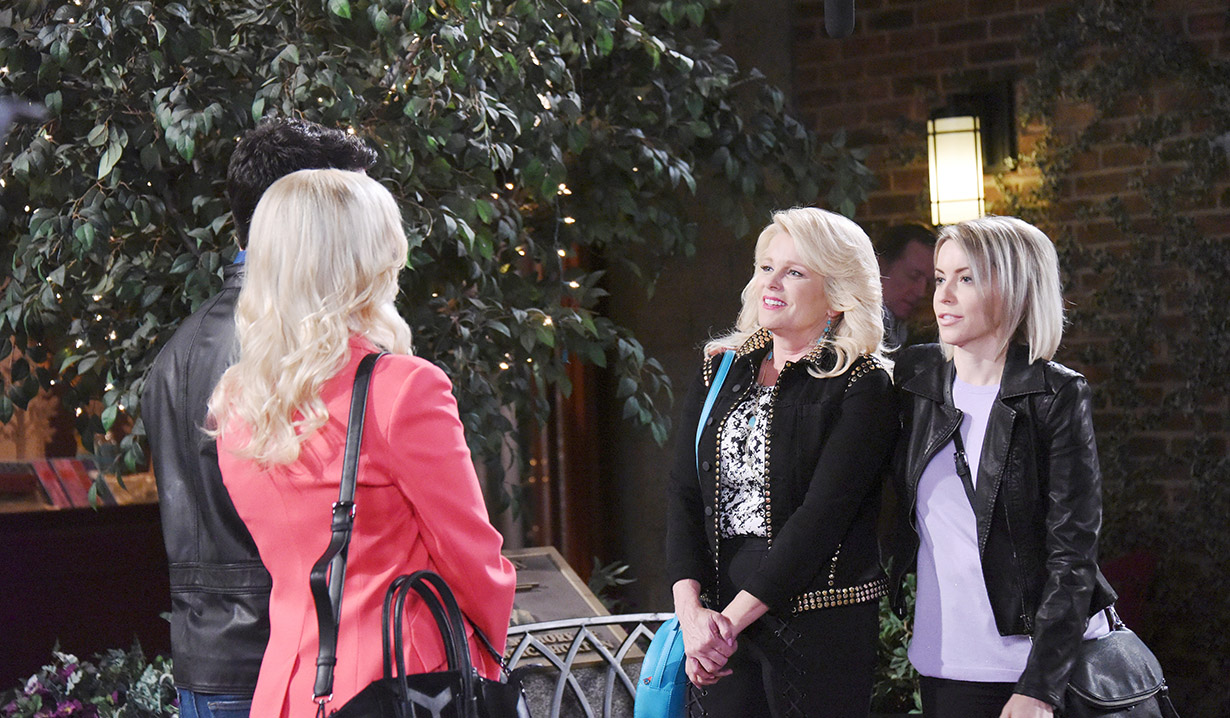 Sami sits at the mystery man’s bedside as Kate appears, surprised that the man in the bed could be EJ. Sami tells her they’re working on getting a DNA test. She fills Kate in on using Susan’s hair from the Marlena doll she had made for her mother. Kate barks out a laugh. She thinks Sami should “look under the hood,” knowing that DNA tests in Salem are always changed. Sami’s shocked. Kate shrugs. It’s not like she hasn’t “seen it” before. They talk about Nicole’s death and how Eric’s blaming himself. Kate’s off to Rex and Sarah’s engagement party. Sami asks her to give them her best. By the hub, Chloe anxiously asks Kayla to do the DNA test, explaining she doesn’t think that Baby Bonnie belongs to Lucas or Bonnie, that Mimi’s the mother. Kayla realizes Chloe’s keeping this secret and can’t do the test without Mimi’s consent. Chloe reminds Kay that she already gave it. She just wants it run once more with different markers. Kayla finally agrees but wonders if Lucas will be upset when he learns she went behind his back. Chloe looks worried. Sami rushes up to check on the DNA test results. Kayla doesn’t have them. She’s glad that “Ghoul Girl” doesn’t have hers. They snark at one another over whose results are more important. Sami goes back to “EJ” and tells stories about their kids and the journey to find EJ.

Lucas and Bonnie make love on the sofa at Salem Inn. Bonnie wants to try for another baby. They kiss and Bonnie wakes up making out with her pillow. Grossed out, Mimi asks what on earth her mother is doing. Mimi tells her mom that Chloe’s getting suspicious. Meems blames Bon Bon and says she’s missing bonding time with her baby. They go to dinner.

Shawn and Belle stop Lucas and the baby in the square. Lucas gives Belle a chilly reception. Belle knows this is awkward and is apologetic. She tries to get Lucas to drop the case but he’s not going anywhere. Shawn asks Lucas to calm down but Lucas will fight for his kid. He thinks she should focus on her family, then tells her Sami needs her. Belle doesn’t think this is any of his business. Lucas snipes that it doesn’t feel good to have someone stick their nose in your business. Has she even apologized for accusing Sami of shooting Marlena? Lucas stomps off and Shawn asks what’s going on. Bonnie and Mimi wander up. Shawn congratulates Bonnie on her baby who takes after her mother. Things are awkward so the women leave and Shawn comments on the strangeness. Belle snarks that he doesn’t know the half of it. She realizes Lucas is right and that she’s been a terrible sister to Sami.

Rex and Sarah have dressed for the engagement party. Sarah feels bad for leaving Holly but Rex reminds her that Eric will be with her. Rex loves her compassion. They talk about having kids one day and smooch.

Roman and Maggie decorate Doug’s Place as they wish for the best for Rex and Sarah. Lucas arrives with the kid and helps Roman move tables. They discuss the mystery patient possibly being EJ and then Roman fawns over Baby Bonnie. Bonnie and Mimi arrive outside. They realize that the restaurant is closed. Rex and Sarah walk up and Bonnie comments on how awkward it is. Introductions and congratulations are made. It’s uncomfortable. Bonnie’s thankful to meet her Mikey’s daughter. Sarah invites them to the party. Inside, Kate moons over the baby as Lucas texts Chloe, asking where she is. Kate greets Maggie. She says Victor’s worn down by all their houseguests. Rex and Sarah head in and he tells her that Mimi’s his ex and that her mother’s suing his brother for custody of their kid. Sarah had no idea. He’s never mentioned Mimi. Outside, Mimi gripes at her mother, then they head inside. Rex gives Mimi the kid’s sock.

Belle goes to Sami at the hospital. Sami’s annoyed. Belle tries to touch her sister and Sami snaps to leave her alone. She doesn’t need her pity. Sami cries as Belle holds her close. By the hub, Chloe gets DNA results and Kayla brings Sami hers.

Back at Doug’s Place, Maggie toasts Rex and Sarah, knowing Mickey would be happy that their families are being joined in marriage. Rex is next. He calls his bride-to-be beautiful, intelligent and kind. Rex toasts Lucas and his baby girl, then Chloe walks in, wide-eyed and with the DNA results.

Susan Has a Premonition of Rex...

Sami's Euphoric That EJ's Alive but...