Wednesday October 31, 2018:  It's Halloween in Salem and Hattie has a spooky dream which spoofs movies, Rosemary's Baby and Get Out. 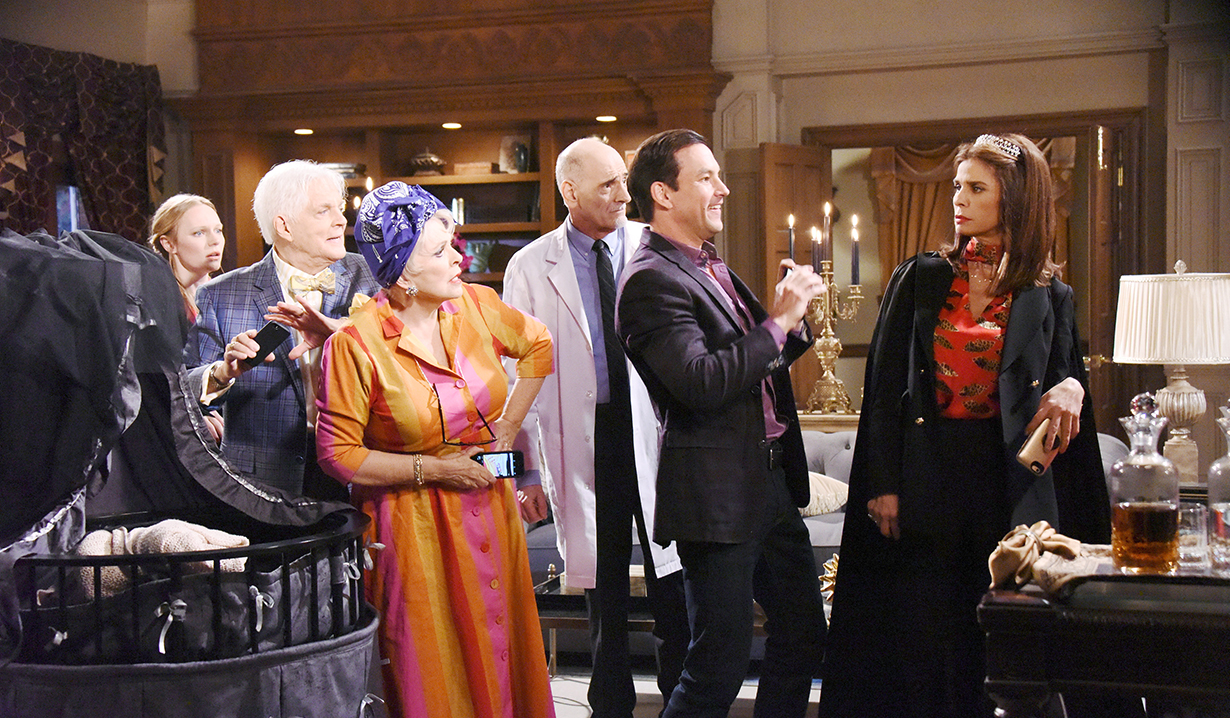 At the hospital, Hattie awakens from a nightmare. She tells John that Marlena’s patients were coming to see her one after the other. “You’ve got a lot of loonies in this town.” John wants her dressed. They’re going home. Later, John wheels Hattie out of her room where Hope has terrible news. “What they cancelled The Good Place? I love that show!” Hattie asks, shocked. John covers for “Marlena” and they head to the chapel where Hope and Eli show them Kristen’s dead with 666, the sign of the devil, written on her forehead in blood. Hope asks “Marlena” if she recalls she did something similar when possessed. Hattie’s rocked. Hope thinks “Marlena” did this but Hattie denies it.

John and Marlena arrive at the DiMera mansion which Hattie calls “The House of Frankenstein.” Abby needs around the clock care so they’re moving in. Hattie bitches. Stefan lets them in and Abby asks “Marlena” to help figure out if the DID returned. Hattie tries to get out of it but John encourages it. The men go smoke cigars while Abigail admits she doesn’t think Stefan or Chad fathered her baby. “Wow, you get around,” Hattie whispers. Abigail’s afraid one of her alters did. She has dreamed she made love to someone else and asks Marlena to hypnotize her. Hattie can’t so Abby shows her a technique she saw in Get Out where someone stirred a cup of tea. Since it worked, they try it. It works. Hattie makes crazy faces and blubbering noises and Abby doesn’t notice. In the spirit of Rosemary’s Baby, Doug and Julie walk in using Brooklyn accents. Julie gives Abby something to protect her with tannis root in it. Eli wanders in. He accuses Abigail of killing Kristen with a cocktail shaker. Abigail denies it. He searches the tunnel as Julie assumes Abby did it, recalling she set fire to Ben. Eli yells and gunshots are heard.

More: A look back at Halloween in Salem 2017

Later, still at the mansion, “Hattie” hypnotizes Eli with the tea stirring method. She asks what he saw in the tunnel. Eli saw someone who wanted to kill him. Julie yells that it must have been Gabi Hernandez. Later, John has taken Eli home and Abigail goes into labor. Stefan points at Hattie. She has to deliver the baby. Hattie looks behind her, then says they need to boil water. She later wakes up after passing out. Stefan thinks it’s lucky Julie delivered the baby. Stefan goes to make calls and Hattie realizes living Marlena’s life is rough. She finds Abby resting in the lounge and congratulates her on her son. She looks at the baby, horrified that it looks like Andre. She tells Abby and then Andre appears. “He takes after his daddy,” Andre says. Dr. Rolf approaches and tells them he made this happen. Abby assumes Andre’s not upset with her for murdering him. He’s angry with Hattie Adams. He takes the kid and gives Abby a book on How to Raise a Wise Ass by Jean Claude Xavier. Hope rushes in. She can’t believe Rolf is alive. Rolf quickly activates the satellite from his watch and Hope yells, “Not again!” She turns into Princess Gina. Gina is crowned and Hattie mocks her for thinking she’s a princess. Abs says, “I thought I was my grandmother and my best friend at the same time so what’s the big deal?” John returns and sees Gina. He grimaces. She flirts and Hattie purses her lips. Hope points a gun at “Marlena” and cries that she wasted away in that castle for John. Hattie calls her pathetic. She should try loving herself. Gina considers that and hands over the gun. She doesn’t need John. Stefan appears and Gina’s hot for him. Julie and Doug return and Stefan says he’s fine with Andre being the baby daddy. Gina recognizes Julie as “what’s her name’s sister-mother.” John tells Doug to look after “Hope” then he and Hattie go. Gina flirts with Stefan as Abby whines. “She’s always such a buzzkill.” Stefan agrees. Gina say to drop her. Once the baby’s brought in they take selfies.

At the pub, Hattie hopes things will get back to normal, but outside, a figure clad in a black cape lurks. Inside, they play Scrabble and wonder who killed Kristen. John says Eli called the answer an anagram. She uses Scrabble pieces to change John Claude Xavier into a Anjelica Deveraux (played by Judith Chapman) who walks in and calls herself Satan. Her eyes turn red. She’s come for Marlena. John realizes she’s what Eli saw. Satan kills John with a cocktail shaker and Hattie swears she’s not Marlena. At SPD, Eli repeats ‘the answer is an anagram’ and Kristen appears. Susan was murdered.

Eli and Kristen arrive at the mansion and tell everyone Susan bit it. They gather to see the baby and Abigail gasps in horror.

Hattie wakes up in the hospital and informs John she wants a divorce. John’s thrilled. “Happy Halloween Hattie Adams,” he says.

Sami has the key to the mystery.

Susan has a premonition.

Ben Has a Revelation About the...

Susan Has a Premonition of Rex...

‘Night Teeth’ Review: A Vampire Thriller That’s Too Cut-and-Paste to Have Any Bite