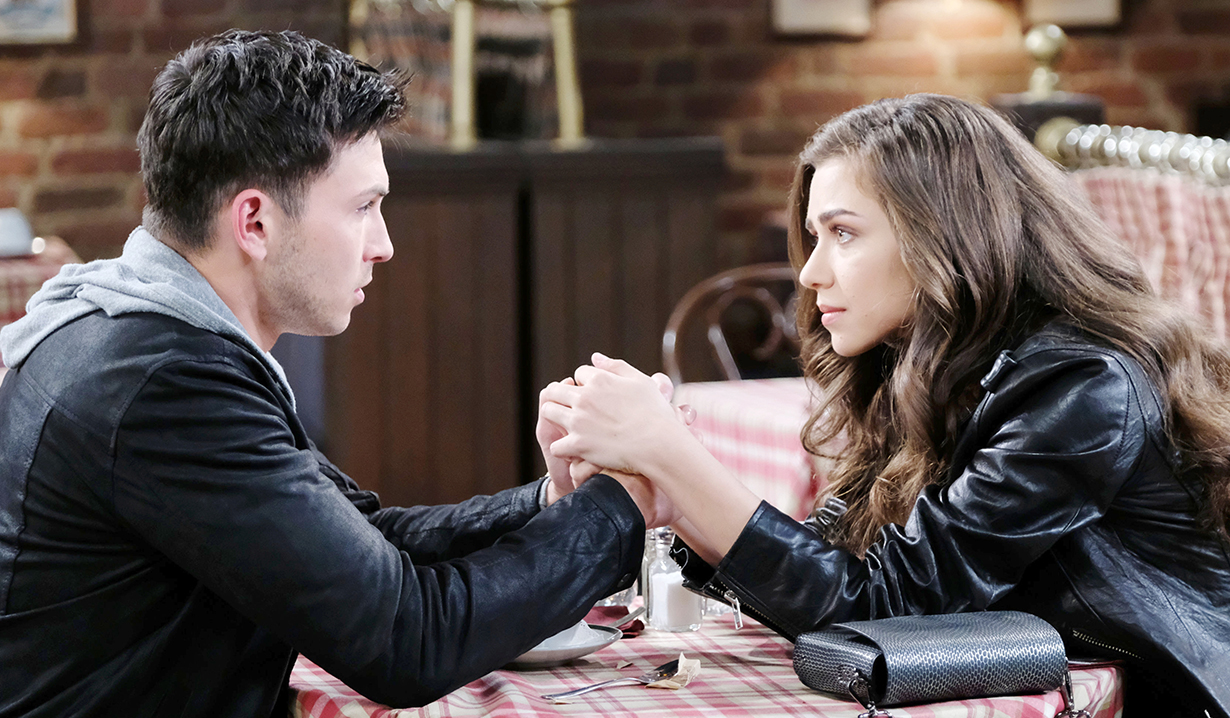 At the hospital, Roman gives Hattie bananas spinach, yoghurt and tabasco as a hangover cure. Hattie’s reluctant but pinches her nose and shakes her legs as she gulps it down dramatically. Roman heads outside to tell John that he thinks Hattie’s taking the bait. John appreciates his sacrifice. He sends Roman back on “the front lines” as Roman laughs and says, “You owe me!” Roman goes back to Hattie, who is feeling better. Roman flirts and Hattie’s encouraged. She jumps him. He pushes her away. Though he wants to make love to her, she’s married to John. To Roman, a Catholic, marriage is a sacrament. When Marlena cheated on him, it destroyed him and he won’t do that to anyone else. He has feelings for Hattie but they can’t be together until she divorces John. John walks in and the sound of a record being scratched is heard. John asks Hattie to sign divorce papers. Roman leans in and urges her but Hattie rips up the papers. “How stupid do you two think I am?” She tosses the pieces at John and blasts Roman for toying with her. Roman claims he does have feelings for her so Hattie tells him to put out or get out. “With John in the room?” Roman asks. Hattie doesn’t care. She pats her bed and her lap. Roman freaks out. He’s sorry. He can’t do this. He goes and Hattie says they’re married until death do they part. John tells her she’ll be Dr. Marlena Evans 24/7. It’ll be another kind of prison. Hattie looks afraid. on a call that she’s going to find Justin to see if he can do anything about Abigail marrying Chad. She disconnects and Eric answers the door to the Kiriakis manse. She’s surprised to see him and asks if he and Nicole are back together. He explains Nicole is dead then details how. Jennifer cries, sorry. She blames herself for not telling him sooner but Eric blames Brady. Jennifer knows Marlena will help and Jenn offers – whatever he needs.

In bed at Salem Inn, Eve asks Brady to forgive himself. It’s not his fault Nicole’s dead. Brady tells her he “slept with” Kristen to try to get her to tell him where EJ was. Eve’s disgusted and calls Brady an SOB. “It looks bad,” Brady says. Eve cries. Brady wanted to do something good for a change but Eve sees it as harboring feelings for Kristen. Brady admits his feelings do linger. Eve feels like a fool. Stefan sent a letter this morning and Basic Black is done – just like them. She’s heading to New York City. She dresses. She was going to leave anyway. “I waited my whole life for someone like you. I guess I’m just not meant for happily ever after,” she whispers, depositing the engagement ring on the table. Brady apologizes. She goes.

At Mandalay, Claire asks Ben if he’s still going along with her plan to break Tripp and Ciara up. As Ciara and Tripp stroll up, Ben says he doesn’t like lying to Ciara. Ciara questions him and Claire quickly says Ben didn’t get the job at the cafe. Tripp snipes that nobody will hire a serial killer. Claire defends Ben but Ben shrugs it off. Tripp goes into work and Ciara apologizes. Ben knows he’s being protective. Claire urges Ciara to help. Ciara has some ideas. They leave while Tripp returns and Claire lies that Ciara “insisted” on helping Ben find a job. Tripp doesn’t get it because of the new arson evidence how can she trust him? Claire scoffs. It’s obviously fake evidence. As they talk, Claire realizes Tripp is the one who set Ben up.

At SPD, Rafe found the company of the can of accelerant who tracked the can to the place it was sold in Brookville. They learn a young man purchased it and head out to see if it was Ben.

At Brady’s pub, Ciara tells Ben that her Uncle Roman will give him a job. Ben isn’t so sure considering what he did to Roman’s grandson. Roman’s not there so they sit and he tells her a story. He was to give his dad a gift on his birthday when he heard a scream from the barn. He looked in and saw a man hanging by ropes from his wrists and his dad torturing him with a farm tool because the man owed him money. Clyde wanted him to see it, to learn how a man protects himself. Ben helped him carry the body and bury it. Ciara tears up. Ben’s never talked about this and he’s never felt safe since. He realizes he never gave his father the gift – a necktie. Both of them gasp and Ben folds into himself, shaking. They hold hands then almost kiss but Ciara can’t. She’s with Tripp. Outside, Roman finds Eric crying on the bench. He holds his son.

More: The Salem Stalker story is one of Days creepiest

Eve bumps into Jenn at the square and blames her for Nicole’s death.

It’s Halloween and things are even stranger in Salem.

Stay tuned for some familiar faces.